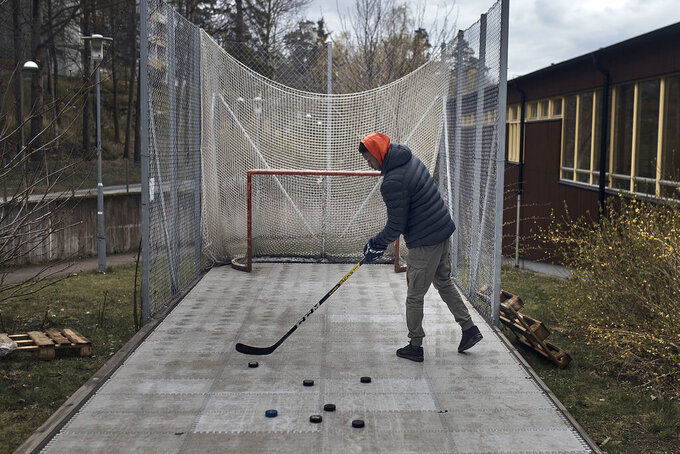 A young man practices hockey in Husby district, Rinkeby-Kista borough in Stockholm, Sweden, Tuesday, April 28, 2020. The coronavirus has taken a disproportionate toll among Sweden's immigrants. Many in these communities are more likely to live in crowded households and are unable to work remotely. There also are concerns the message has not reached everyone in immigrant neighborhoods. (AP Photo/Andres Kudacki)

STOCKHOLM (AP) — The flight from Italy was one of the last arrivals that day at the Stockholm airport. A Swedish couple in their 50s walked up and loaded their skis into Razzak Khalaf's taxi.

It was early March and concerns over the coronavirus were already present, but the couple, both coughing for the entire 45-minute journey, assured Khalaf they were healthy and just suffering from a change in the weather. Four days later, the Iraqi immigrant got seriously ill with COVID-19.

Still not able to return to work, Khalaf is part of the growing evidence that those in immigrant communities in the Nordic nations are being hit harder by the pandemic than the general population.

Sweden took a relatively soft approach to fighting the coronavirus, one that attracted international attention. Large gatherings were banned but restaurants and schools for younger children have stayed open. The government has urged social distancing, and Swedes have largely complied.

The country has paid a heavy price, with 3,175 fatalities from COVID-19. That's more than 31 deaths per 100,000 population, compared with about 8 per 100,000 in neighboring Denmark, which imposed a strict lockdown early on that is only now being slowly lifted.

Inside Sweden's immigrant communities, anecdotal evidence emerged early in the outbreak that suggested that some — particularly those from Somalia and Iraq — were hit harder than others. Last month, data from Sweden’s Public Health Agency confirmed that Somali Swedes made up almost 5 percent of the country's COVID-19 cases, yet represented less than 1 percent of its 10 million people.

Many in these communities are more likely to live in crowded, multigeneration households and are unable to work remotely.

“No one cares for taxi drivers in Sweden,” said Khalaf, who tested positive and was admitted to a hospital when his condition deteriorated. Despite difficulties breathing, the 49-year-old says he was sent home after six hours and told his body was strong enough to “fight it off.”

In Finland, Helsinki authorities warned of a similar over-representation among Somali immigrants in the capital — some 200 cases, or about 14%, of all confirmed infections. In Norway, where immigrants make up nearly 15% of the general population, they represent about 25% of confirmed coronavirus cases.

“I think a pandemic like this one, or any crisis will hit the most vulnerable people in society the most wherever in the world, and we see this in many many countries," said Isabella Lovin, Sweden's deputy prime minister, in an interview with The Associated Press.

Noting that the virus was spreading faster in some crowded Stockholm suburbs, Lovin said said the city is providing short-term accommodation to some people whose relatives are vulnerable.

Sweden, Norway and Finland recognized early failings in community outreach in minority languages and are seeking to fix this. The town of Jarfalla, outside Stockholm, has had high school students hand out leaflets in Somali, Persian, French and other languages, urging people to wash their hands and stay home if sick.

With Sweden's relatively low-key approach to fighting the virus that relies mainly on voluntary social distancing, there are concerns the message has not reached everyone in immigrant neighborhoods.

“It’s important that everyone living here who has a different mother tongue gets the right information,” said Warda Addallah, a 17-year-old Somali Swede.

Anders Wallensten, Sweden’s deputy state epidemiologist, said officials have worked harder on communicating with such groups "to make sure they have the knowledge to protect themselves and avoid spreading the disease to others.”

But teacher and community activist Rashid Musa says the problem runs much deeper.

“I wish it were that easy — that you needed to just translate a few papers,” he said. “We need to look at the more fundamental issue, which is class, which is racism, which is social status, which is income.”

“The rich have the opportunity to put themselves into quarantine, they can go to their summer houses,” Musa said.

A key government recommendation for individuals to work from home if possible is harder in marginalized areas where many have jobs in the service sector.

“How can a bus driver or a taxi driver work from home?” Musa asked.

Evidence of this disparity can be found in anonymous data aggregated by mobile phone operator Telia, which has given the Swedish Health Authority information about population mobility. By comparing the number of people in an area early in the morning with those who traveled to another area for at least an hour later in the day, Telia estimates how many go to work and how many stay home.

“We do see certain areas that are maybe more affluent with a bigger number of people working from home,” said Kristofer Agren, the head of data insights for Telia. Data shows a 12 percentage point difference between Danderyd, one of Stockholm’s most affluent suburbs, and Botkryka, one with the highest percentage of first- and second-generation immigrants.

“Many of our members have contracted the coronavirus,” said Akil Zahiri, who helps administer the mosque on the outskirts of Stockholm. "But you do the best you can.”

Zahiri spoke to the AP as he sat alone in Sweden’s largest Shiite mosque coordinating a video call with the congregation to pray for a member who died of COVID-19. The sound of prayer crackled through the computer, breaking the silence in the empty hall.

During Ramadan, the month when Muslims fast during the day, the mosque canceled all public events. Zahiri reminded the congregation to take part in social distancing, urging them to stay home for the Iftar, the daily breaking of the fast after sunset, and to avoid sharing food with friends.