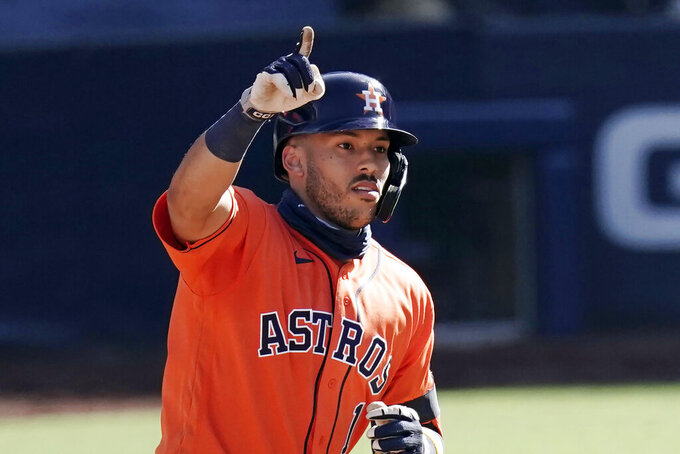 FILE - In this Oct. 12, 2020, file photo, Houston Astros' Carlos Correa celebrates after hitting a solo home run during the sixth inning in Game 2 of a baseball American League Championship Series, against the Tampa Bay Rays in San Diego. Correa and the Astros settled their arbitration case Saturday, Feb. 6, 2021, reaching a deal on a one-year contract for $11.7 million. Correa had asked for $12.5 million and the Astros had offered $9.75 million. (AP Photo/Jae C. Hong, File)

HOUSTON (AP) — Shortstop Carlos Correa and the Houston Astros settled their arbitration case Saturday, reaching a deal on a one-year contract for $11.7 million.

The 26-year-old All-Star had an $8 million salary that became a prorated $2,962,963 during the pandemic-shortened season.

Correa hit .264 with five home runs and 25 RBIs in 58 games last year, then excelled in the postseason. He hit .362 with six homers and 17 RBIs in 13 playoff games as Houston came within one win of reaching the World Series.

“Going through the arbitration process is necessary sometimes and it’s there for a reason,” Astros general manager James Click said. “But we’re all glad to have it behind us so we can focus on our top priority, which is getting out there to compete for a championship with Carlos and the rest of the team.”

Correa said he was glad to take care of business.

“I’m happy that we were able to come to an agreement and avoid arbitration,” he said. “Arbitration is not a good process.”