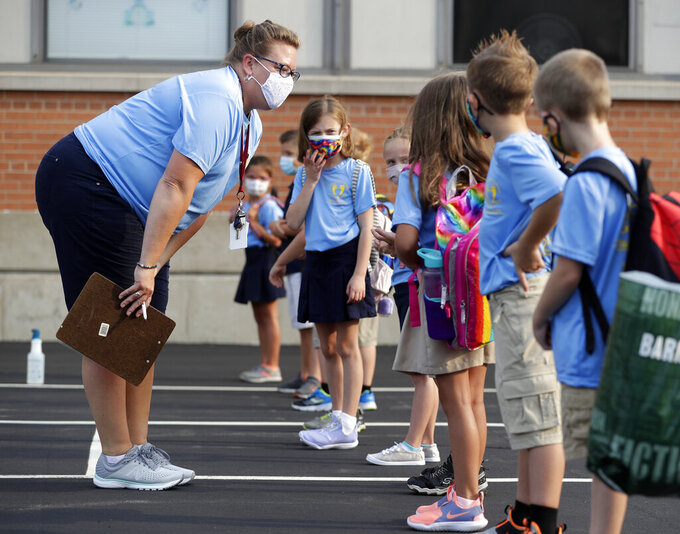 FILE - In this Aug. 26, 2020, file photo, first-grade teacher Jessica Johnson asks students if they've been sick or near anyone who's been sick before the start of the first day of school at Our Lady of Lourdes Catholic School in De Pere, Wis. The Wisconsin Supreme Court ruled Friday, June 11, 2021, that local health departments do not have the authority to close schools due emergencies like the coronavirus pandemic. (Sarah Kloepping/The Post-Crescent via AP, File)

MADISON, Wis. (AP) — The Wisconsin Supreme Court ruled Friday that local health departments do not have the authority to close schools due to emergencies like the coronavirus pandemic, delivering a win to private and religious schools that challenged a Dane County order.

The conservative majority of the court, in a 4-3 decision, also ruled that a school closure order issued last year by Public Health Madison & Dane County infringed on constitutional religious rights.

The ruling is another victory for conservatives who challenged state and local orders issued during the pandemic to close businesses and schools, limit capacity in bars, restaurants and other buildings and require masks to be worn. All of those restrictions have either expired or been rescinded by courts.

Friday's ruling will have no immediate impact because the 2020-21 school year has ended, but it will limit the powers of health departments in the future by preventing them from ordering school closures.

“Even as the COVID-19 pandemic recedes, the court’s decision provides a critical correction that ought to prevent future abuses of power in an emergency,” said Rick Esenberg, president of the Wisconsin Institute for Law and Liberty. That group brought the lawsuit on behalf of five private schools and eight families in Dane County, School Choice Wisconsin Action and the Wisconsin Council of Religious and Independent Schools.

The lawsuit targeted an order issued in August by the county health department prohibiting in-person instruction for grades 3-12 at any public or private school. The Supreme Court in early September put that order on hold while it considered the case.

While many private and public schools in the county resumed in-person classes, Madison's school district remained entirely virtual until March. Its school year ended this week.

The law in question allows local health departments to do what is “reasonable and necessary” to suppress a disease outbreak. It does not specifically grant authority to close schools. There is a law giving that power to the state Department of Health Services secretary.

Justice Rebecca Bradley, writing for the conservative majority, said the law giving local health departments their power during a health emergency “cannot be reasonably read as an open-ended grant of authority,.”

She was joined by Chief Justice Annette Ziegler and justices Pat Roggensack and Brian Hagedorn.

Liberal justices Rebecca Dallet, Ann Walsh Bradley and Jill Karofsky dissented, saying closing schools is under the umbrella of what action local health departments are permitted to take in an emergency.