Court orders California to cut San Quentin inmates by half 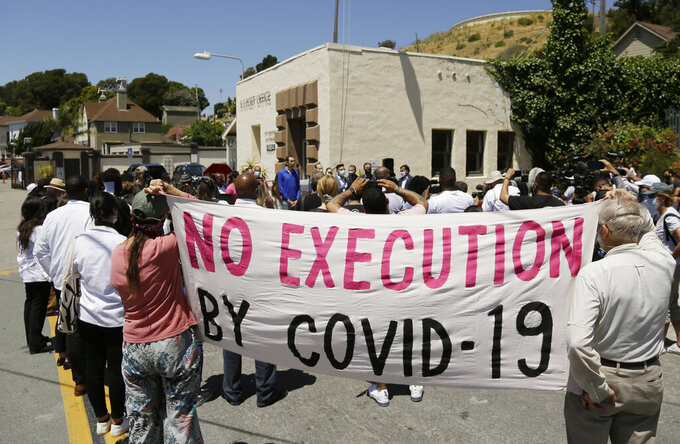 FILE - In this July 9, 2020, file photo, people hold up a banner while listening to a news conference outside San Quentin State Prison in San Quentin, Calif. The group of legislators, advocates, academics and public health officials gathered outside San Quentin State Prison to discuss a COVID-19 outbreak at the facility that has sickened more than 1,400 inmates with six deaths. A California appeals court has ordered state corrections officials to cut the population of one of the world's most famous prisons to less than half of its designed capacity, citing officials' "deliberate indifference" to the plight of inmates during the coronavirus pandemic. State prison officials said Wednesday, Oct. 21, 2020, that they are deciding whether to appeal the order, which otherwise will force them to parole or transfer about 1,100 inmates serving time in San Quentin State Prison north of San Francisco. (AP Photo/Eric Risberg, File)

SACRAMENTO, Calif. (AP) — A California appeals court has ordered state corrections officials to cut the population of one of the world's most famous prisons to less than half of its designed capacity, citing officials' “deliberate indifference” to the plight of inmates during the coronavirus pandemic.

State prison officials said Wednesday that they are deciding whether to appeal the order, which otherwise will force them to parole or transfer about 1,100 inmates serving time in San Quentin State Prison north of San Francisco.

California's oldest prison, home to its death row, was the site of one of the nation's worst coronavirus outbreaks, with 28 inmate deaths and 2,200 infections at its peak — about 75% of the inmate population. Nearly 300 employees were sickened and one died, though all but nine employees are now back to work.

It was “the worst epidemiological disaster in California correctional history,” the First District Court of Appeal in San Francisco said in Tuesday's ruling.

The three-justice court said officials' decision not to cut the inmate population by half, as recommended by prison officials' outside advisors in June, was “morally indefensible and constitutionally untenable.”

Assemblyman Marc Levine, a Democrat who represents the area, on Wednesday said that without a further significant reduction, "it is not a question of if another COVID-19 spike will happen at San Quentin, it is a question of when.”

However, there is only one current active coronavirus case at San Quentin, and two other California prisons now top it for both active cases and cumulative number of infections.

San Quentin's outbreak flared when prison officials botched the transfer of inmates from a Southern California prison in May, inadvertently sending infected prisoners who had not been recently tested.

The prison then housed more than 3,500 inmates, many with multiple health vulnerabilities, the experts found. Cutting the population by half would allow many inmates to be housed separately and let officials clear more space to keep inmates spaced for treatment, quarantine or to reduce the virus' spread, they said.

The three appellate justices said the state failed to present any evidence to the contrary. Their unanimous order requires prison officials to house no more than 1,775 inmates in space designed for about 3,100 inmates and a staffed capacity of nearly 4,500 inmates.

The population can be reduced by transfers to other prisons or paroles, the court said. State prisons now hold fewer than 98,000 inmates, so those from San Quentin could likely be absorbed elsewhere, the court said.

Only about 700 San Quentin inmates could not be considered for release, the court said, because they can never be paroled or are on the nation's largest death row, though Gov. Gavin Newsom has put a moratorium on executions while he is governor.

“It’s a monumental decision and it is the right decision and it supports our contention that people in San Quentin’s right to be free from cruel and unusual punishment has been violated since the start of the outbreak," said Danica Rodarmel, state policy director for the San Francisco Public Defender.

Her office and others next week are asking a judge in Marin County, home to San Quentin, to free more than 300 of the prison's inmates on similar legal grounds. Lawyers in those cases also are arguing that the prison's population must be reduced at least 50%, but say releases — not transfers — are the answer because botched transfers "caused this problem to begin with,” Rodarmel said.

State officials “respectfully disagree with the court’s determination,” corrections department spokeswoman Dana Simas said in an email, saying the department "has taken extensive actions to respond to the COVID-19 pandemic.”

The department has released more than 21,000 people since March through earlier releases or because they finished their sentences, “resulting in the lowest prison population in decades,” she said. San Quentin’s population was trimmed to the current roughly 2,900 inmates.

Current inmate coronavirus cases “are the lowest they have been since May,” Simas said, with fewer than 500 current infections and more than 14,000 recovered. Statewide, 71 inmates and 10 employees have died.

The justices' sweeping ruling came in lawsuit by a 64-year-old San Quentin inmate Ivan Von Staich, who is serving 17 years-to-life for second-degree murder on top of a 13-year sentence for attempted murder.

He was housed with a 65-year-old inmate in a cell "so small that you can touch the walls with your hands,” where both tested positive for the virus. The court ordered him removed from the prison, noting that he has already been accepted at a residential facility supervised by the corrections system.