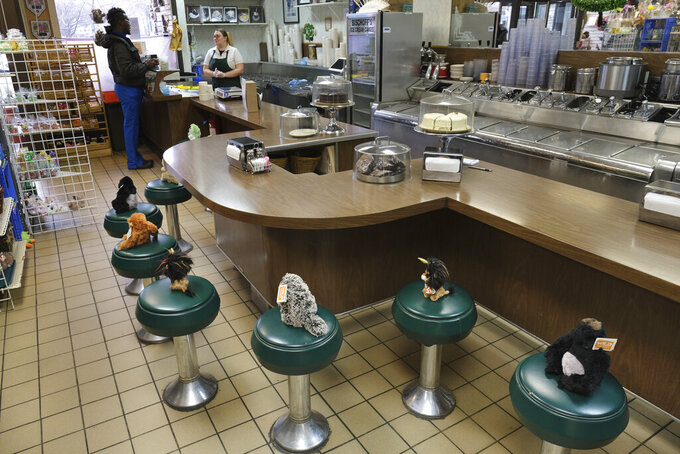 FILE - In this March 16, 2020, file photo, stuffed animals resting on the stools at Bischoff's, an ice cream parlor in Teaneck, N.J., serve as a gentle reminder that customers are not allowed to sit down. (AP Photo/Seth Wenig, File)

TRENTON, N.J. (AP) — COVID-19 altered the daily routine in New Jersey in 2020 and sewed a thread through the state's other top stories.

Homes were transformed into offices and classrooms. Reality turned virtual. The muffled mumble of placing takeout orders while wearing masks became the norm and dining al fresco initially replaced the comfort of gathering with family and friends inside restaurants and bars.

All the restrictions Gov. Phil Murphy and his health team ordered sought to stem the infection rate and deaths. And the Democrat wasn’t shy to cop a New Jersey attitude by calling violators “knuckleheads.”

As the year ended, there was hope the stenciled, socially distanced footprints in stores and elsewhere would lead to a return to normal. Along the way, other stories shared attention with the pandemic: Voters and lawmakers cleared the way for recreational marijuana; a federal judge’s family was shattered by a gun-toting lawyer with a grudge; and the justices on the U.S. Supreme Court weighed in on a classic episode of political payback, New Jersey-style.

A look at some of the top stories of the year in New Jersey:

The first confirmed case of COVID-19 in New Jersey, a health care worker in his 30s who split time between Fort Lee and New York City, was announced in early March.

Less than a month later, 25,000 people had been infected and more than 500 had died, plunging the state into what became an existential crisis that crippled its economy and exposed a deep rift between government officials seeking to contain the pandemic and residents and small business owners chafing at restrictions on their lives and livelihoods.

Murphy’s executive orders to close gyms, movie theaters and other businesses deemed nonessential and restrict restaurants to takeout only prompted outcries from many — and more than a few lawsuits — but by summer, the measures appeared to have helped slow the spread.

By fall, the numbers began to rise again, though, and by year’s end, the virus had claimed more than 16,000 lives in the state.

In December, the rollout of two new vaccines provided a jolt of hope. Like much else in 2020, though, the feel-good moment was short-lived as officials learned soon after the first shots had been administered that the state’s initial shipments of the vaccine would be reduced by nearly 40%.

When they reopened, it was only at 25% of capacity because of state-imposed restrictions designed to slow transmission of the virus.

In the fall, Murphy further restricted the casinos’ operations by prohibiting them from serving food and drinks after 10 p.m.

The casinos’ financial picture would have been bleaker had it not been for steadily increasing revenue from internet gambling, and a smaller but equally thriving sports betting industry.

Many casino workers remained unemployed, waiting until capacity restrictions are lifted or eased in 2021.

New Jersey voted overwhelmingly — 2 to 1 — to change the state constitution to allow for a recreational marijuana marketplace for people 21 and older.

The amendment takes effect on New Year’s Day, but there won’t be a marketplace available to purchase pot to ring in 2021. Lawmakers sent Murphy a 200-plus-page bill to establish the marketplace and regulators could take up to six months to get cannabis shops open.

Arizona, Montana and South Dakota joined New Jersey legalizing the drug this year. Along with the District of Columbia, 15 states have also authorized recreational marijuana.

New Jersey beat its neighbors, Pennsylvania and New York. Lawmakers emphasized social justice reforms, which are aimed at acknowledging the effects the war on drugs had on Black residents.

There also is tax revenue. Cannabis will be subject to the 6.625% sales tax, and an excise tax that fluctuates depending on the price of marijuana by the ounce.

The proceeds from the excise tax will go entirely toward communities disproportionately affected by marijuana drug arrests.

New Jersey held its first mostly mail-in election in 2020 because of the pandemic, resulting in a record number of votes cast — more than 4.6 million.

Murphy called for all registered voters to get mail-in ballots in August and the Democratic-led Legislature passed a bill supporting his executive order.

Although the mail-in election was novel, there were hardly any surprises.

Incumbents, including Jeff Van Drew, were reelected in the state’s 12 House districts. Van Drew became a Republican after leaving the Democratic Party a year ago because he opposed impeaching President Donald Trump.

About 94% of registered voters voted by mail. Residents had the option of taking their mail-in ballots to polling places in person while residents with certain disabilities were allowed to vote in person.

Overall turnout was 72%, the highest since 2008's 73%. Still, the number of total votes cast shattered the previous record of about 4 million votes in 2016.

During a year marked by mounting political polarization and rage at authority figures, the shooting of a federal judge’s son by a self-described anti-feminist lawyer touched a nerve.

The assailant, Roy Den Hollander, was angry about a case he had pending before Salas and went to the family’s home dressed as a FedEx deliveryman. Salas’s husband, Mark Anderl, was also shot but survived.

After Den Hollander took his own life a day later, authorities found thousands of pages of often racist and misogynistic screeds he had posted online.

More chilling, authorities said Den Hollander had a document with information about a dozen female judges from across the country — half, including Salas, Latina — with him when he was found dead.

By November, Murphy had signed a bill into law that protects the personal information of judges and other law enforcement personnel from being publicly available, and similar legislation was being considered by Congress.

What started with four days of crushing traffic jams at the country’s busiest bridge and turned into a political scandal ended with a rebuke — not for the perpetrators, but for those who prosecuted them.

The U.S. Supreme Court in May threw out the convictions of two aides to former Republican Gov. Chris Christie in the George Washington Bridge lane-closing scandal.

The justices determined that while Bill Baroni and Bridget Kelly abused their power in 2013 by creating the gridlock to punish a Democratic mayor for refusing to endorse Christie, the U.S. attorney’s office overreached by charging them with federal crimes.

Christie, who wasn’t charged, denied knowing about the plot and accused prosecutors of targeting him in their own political vendetta.

The ruling ended more than six years of drama that sank Christie’s presidential hopes and reinforced New Jersey’s reputation as a political cesspool.

The scandal dubbed “Bridgegate” also cost taxpayers more than $15 million in legal fees and other costs and became a punchline for late-night talk show hosts.

Kelly, Christie’s former deputy chief of staff and the author of the infamous “time for some traffic problems in Fort Lee” email, said she wanted to return to public service.

Baroni, a former executive at the authority that operates the bridge who had already begun serving his prison sentence, planned to resume practicing law and become an advocate for prison reform.