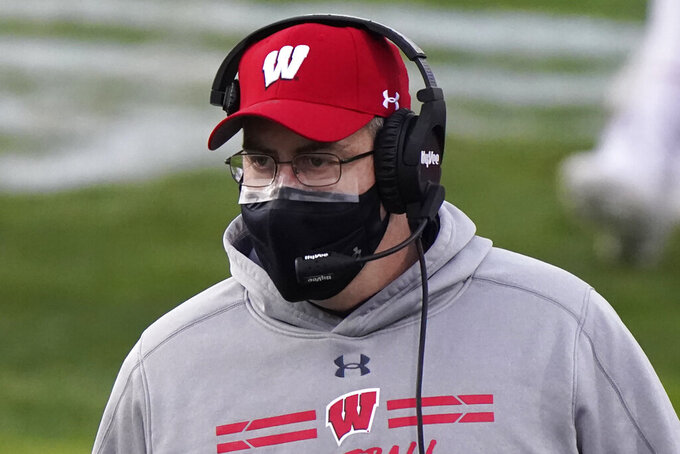 PISCATAWAY, N.J. (AP) — The coronavirus pandemic was considered by many coaches to be the biggest opponent for Big Ten Conference teams coming into this virus-delayed football season, and it certainly has been.

With the annual bragging rights game between Minnesota and No. 18 Wisconsin called off on Tuesday because of another outbreak among the Gophers, five games have been canceled due to COVID-19-related issues since play began on Oct. 23.

Because of federal laws limiting what the conference’s 14 universities can say about the health of college athletes, it’s hard to say how many have been taken off the field by the virus.

Here is just a snapshot:

— Rutgers had 30 players sidelined during a summer outbreak.

— Minnesota went into a game last week with 61 scholarship players. (FBS programs are allowed 85 scholarships on their roster.)

— Illinois was missing roughly a dozen players early in the season, including its starting quarterback.

— Maryland had to pause its program because of positive tests and close contact restrictions. A positive test requires a player to isolate for 21 days.

Just getting to this point has been a journey. The conference called off the season in August. Five weeks later, the league decided to play after receiving guarantees that athletes could be tested for the virus every day and there would be screening protocols for virus-related heart ailments for those who tested positive.

Fans got their football, but there it's been a struggle for players and coaches.

The pandemic is the first thing Rutgers coach Greg Schiano discusses at the start of his daily meetings with players. His message after last weekend brought the picture into focus. Eighteen out of 62 scheduled Division I games were canceled or postponed, so 36 teams didn't get a chance to play.

He continues to dispense the medical advice heard around the country since March: Wear your mask, wash your hands frequently and practice social distancing.

“What we try to say is we got to take care of here," Schiano said. “We can’t take care of everywhere. But if we take care of our business and we get a little lucky and we’ll be able to play our whole season, that’s really what we want to do.”

Wisconsin's program has been hit harder than any other in the league, seeing three games called off. It lost matchups against Nebraska (Oct. 31) and Purdue (Nov. 7) after an outbreak on campus. The Minnesota cancellation, which came after a spike among Gopher players, means the Badgers have played only three games this season with four weekends to go, including Saturday's washout.

When Wisconsin officials announced on Nov. 3 the Purdue game would be scrapped, the team had 27 active cases involving 15 players and 12 staffers.

“I 100% think it’s been worth the different things that have been thrown at us, testing every day and stuff like that," senior Badgers defensive end Isaiahh Loudermilk said. "I would do anything to have this season. I’m sure that’s how a lot of guys are. The main thing is staying safe, which is why a lot of guys don’t really do much. We’re just kind of stuck to our room when we leave this facility. That’s kind of just the sacrifice we have to make.”

Fleck said one of the toughest things for his players is getting a call saying their test came back positive.

It's all part of the new reality for players and coaches who are working under new rules. The meeting room is many times a virtual one. Hugs and pats on the back are now air pumps for the most part.

“This is one of the hardest years,” Fleck said. "I think every coach would sit there and say that.”

Maryland had home games against No. 3 Ohio State and Michigan canceled after Locksley and several players tested positive. The Terrapins returned to the practice field Monday and hope to play Saturday against No. 12 Indiana.

However, the momentum generated by consecutive wins over Minnesota and Penn State has been lost.

“We knew heading into this adjusted season that there could be hiccups along the way,” Locksley said. “Every week as we prepare, we prepare for two opponents: our football opponent and COVID.”

Even the non-football issues are a challenge.

Ohio State and Rutgers are having team meals instead of letting players go home to eat.

Buckeyes coach Ryan Day said it's a sacrifice made by the players that fans don't see.