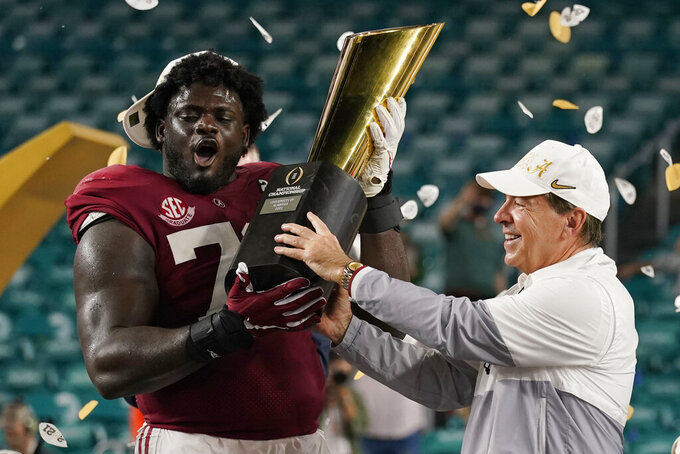 The end of the college football season began with a scene that would have looked bizarre 12 months ago — and will likely appear just as strange looking back years from now — but seemed entirely unremarkable Monday night.

From start to finish, the specter of COVID-19 loomed large over the 2020 college football season and the national championship game was no exception.

Along with masks for almost everyone except the players, there were lots of empty seats — around 50,000 — for the College Football Playoff showdown. The game, played in the Miami Dolphins’ stadium, drew the sort of turnout typically found in the fourth quarter of an NFL preseason game.

For sports fans, the odd atmosphere has become frustratingly familiar — like Alabama, which beat Ohio State 52-24 to complete an unbeaten season, the Lakers, Lightning and Dodgers won championships in mostly empty arenas.

But the challenges college football faced in navigating the pandemic were unique, as Heisman Trophy winner DeVonta Smith noted after catching three touchdown passes to lead Alabama to victory.

“With COVID and everything going on, it just made things tougher, and made us more together as a team, being here for each other, keeping our bubble small,” Smith said. “The discipline on this team is like no other.”

Many were pessimistic the season would ever reach the finish line when it began Aug. 29 with the Guardian Kickoff Classic between Austin Peay and Central Arkansas, a game attended by far fewer than the 2,000 tickets that were available.

Nearly 130 subsequent Bowl Subdivision games were postponed or canceled after that and every week seemed to bring a headache or a twist tied to the coronavirus. Players around the country endured frequent testing as they tried to avoid campus outbreaks of the virus, with mixed success.

The Pac-12 and Big Ten postponed their seasons before reversing course, and Ohio State played only eight games. Alabama made it to the Rose Bowl, which because of the pandemic was played not Pasadena but in Texas.

Fittingly, the championship game took place at a COVID-19 vaccination and testing site. Ohio State was without 13 players, and while the school didn't give a reason, Day acknowledged last week the Buckeyes were dealing with new cases of the virus.

Saban tested positive for the virus twice during the season, with one result deemed a false positive. That made it appropriate he was at the center of the championship trophy celebration, to applause from masked, socially distancing Crimson Tide fans scattered around the stadium.

“Perseverance probably is the one word that describes this team the best,” Saban said, “in terms of what they’ve had to overcome all season long to go undefeated and win a championship.”

Even with a small crowd, there was a big roar when Saban lifted the trophy. And the audience around the country was huge, as sports again offered a diversion and some semblance of normalcy.

It was a made-for-TV season that ends with an asterisk, and college football now looks toward the 2021 season, which question marks of its own.