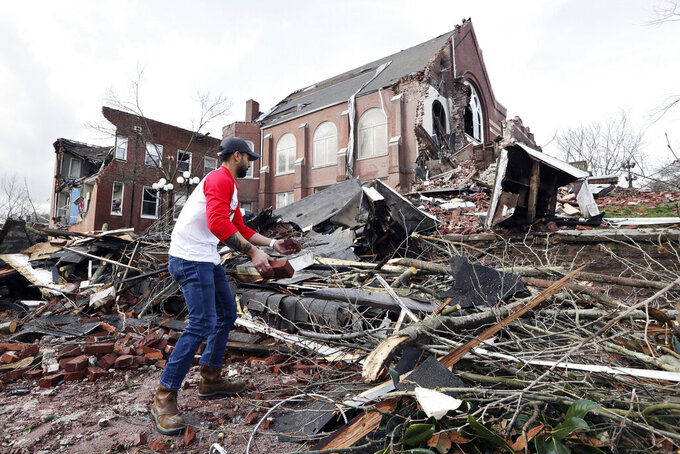 FILE — In this March 3, 2020, file photo, Sumant Joshi helps to clean up rubble at the East End United Methodist Church after it was heavily damaged by storms in Nashville, Tenn. In the overnight darkness before Tennessee's presidential primary day in March, at least six tornadoes carved through Middle Tennessee in a series of damaging storms that killed 25 people, including 19 in Putnam County and two in Nashville. The story was selected as the No. 2 news story in Tennessee for 2020. (AP Photo/Mark Humphrey, File) 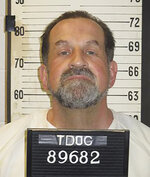 NASHVILLE, Tenn. (AP) — The top story in Tennessee in 2020 was the new coronavirus and its crippling grip on every facet of life, while a string of deadly tornadoes in March came in at No. 2 in an annual Associated Press survey of reporters, editors and broadcasters.

The COVID-19 pandemic has sickened hundreds of thousands of Tennesseans this year, and thousands are now dead. The easily spread virus prompted wrenching fights over the government's role in people's lives: whether to keep kids in school, how long to keep businesses closed or operating at a reduced capacity, and whether to require people across the state to wear masks to stop the virus's spread.

First-term Gov. Bill Lee, a Republican, approached the health crisis with a focus on minimizing how long Tennessee's economy would remain shuttered. He pushed for students to return to the classroom and let individual counties decide on their own whether to require masks. Six metro counties have been able to impose stricter limits on businesses and gatherings than the state.

The state chopped hundreds of millions of dollars worth of planned spending out of fear it could lose up to $1.5 billion in revenue due to the pandemic, then ultimately saw revenues begin to grow. Officials laid out emergency plans to care for COVID-19 patients in temporary medical centers, only to see that sufficient health care staffing, not space, would be the bigger issue.

The virus spread through prisons, homes, bars, churches and nursing homes. Legendary folk-rock singer-songwriter John Prine and country music star Joe Diffie were among the thousands of COVID-19 patients who died in Tennessee.

Heading into 2021, the recent pace of Tennessee's outbreak has hovered at or near the worst in the country per capita, with serious concern about how the hospital system could handle a prospective holiday outbreak coupled with the ongoing post-Thanksgiving surge.

“There’s no denying that the pandemic — and how Tennessee has navigated it — is the top story for our state this year,” said Allison Collins of the Chattanooga Times Free Press. “With the state leaving many decisions up to counties, the confusing balance of power put real pressure on local newspapers to accurately and thoroughly explain how that affected their communities.”

Those affected by the Middle Tennessee tornadoes in March didn't have much time to sort through the wreckage before the global pandemic and its restrictions bore down on them. They were forced to rebuild their property, homes and lives as the world around them was rapidly closing down to slow the suddenly spreading virus.

The twister-producing storms struck overnight before Tennessee’s presidential primary in March, causing massive damage and killing 25 people, including two in Nashville and 19 in Putnam County, where President Donald Trump surveyed damage on the ground.

Only a few weeks later on the other side of the state, mid-April Easter storms in the Southeast produced a tornado, killing three people in and around Chattanooga in the early phase of the pandemic.

The No. 3 story this year was the national outcry for racial justice in the wake of George Floyd’s death, which played out on several fronts in Tennessee.

The governor broke with his previous stance to recommend moving the bust of former Ku Klux Klan leader and Confederate Gen. Nathan Bedford Forrest out of the state Capitol and into the state museum, and officials cast the first of multiple votes needed to move the bust. Acting under an arduous state law that makes it difficult to move Confederate and other historical monuments, another state panel could vote next year to move the statue as early as February 2021.

Meanwhile, reacting to persistent protests against racial injustice near the Capitol, Republican lawmakers, backed by Lee, made it a felony offense to camp out on state ground. Anyone convicted of a felony loses the right to vote.

Supporters of the new penalty were angered by a demonstration in late May in which a few people set fires inside Nashville’s historic courthouse and toppled a statue outside the Capitol honoring Edward Carmack, a state lawmaker and newspaper publisher who espoused racist views. Opponents noted that such acts were already against the law, and argued there was no need for the crackdown on camping.