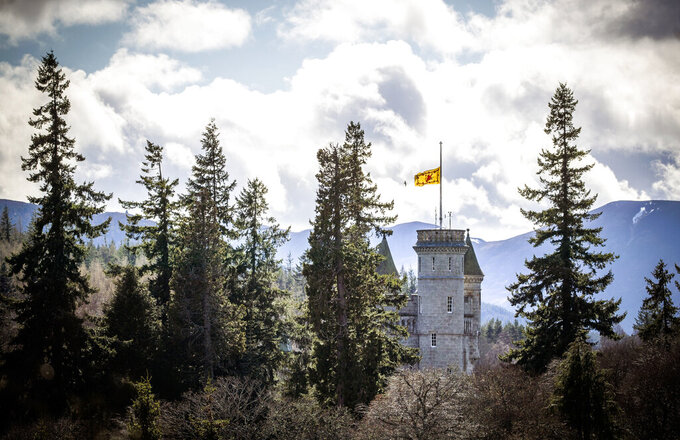 The Lion rampant flies at half mast at Balmoral Castle following the announcement of the death of Britain's Prince Philip, in Aberdeenshire, Scotland, Friday, April 9, 2021. Prince Philip, the irascible and tough-minded husband of Queen Elizabeth II who spent more than seven decades supporting his wife in a role that both defined and constricted his life, has died, Buckingham Palace said Friday. He was 99. (Jane Barlow/PA via AP) 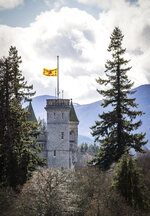 LONDON (AP) — Prince Philip will be laid to rest with all the honors due a prince of the United Kingdom and a consort to Queen Elizabeth II.

But the coronavirus pandemic means it will be a more low-key farewell than has marked many royal deaths. The pandemic has required changes to the well-prepared plans for Philip’s passing, code-named Operation Forth Bridge.

“During the coronavirus pandemic, and in light of current government advice and social distancing guidelines, modified Funeral and ceremonial arrangements for His Royal Highness The Duke of Edinburgh are being considered by Her Majesty The Queen,” Buckingham Palace said in a statement. “Details will be confirmed in due course.”

Flags on government buildings and royal residences were lowered to half-mast and British television networks canceled scheduled programs to allow for special coverage after Philip died Friday at 99.

His death will be marked with 41-gun salutes at noon on Saturday at locations across the country, including the Tower of London and Edinburgh Castle, as well as in Gibraltar and on Royal Navy ships at sea.

But the palace and the British government urged people not to gather or lay flowers outside the royal residences to honor him. The palace instead invited well-wishers to sign a book of condolences — but only online, to avoid crowds and queues.

Britain, which has Europe's highest toll in the pandemic at over 127,000 dead, is still under some lockdown restrictions to combat the spread of COVID-19.

When the Queen Mother Elizabeth — the last royal consort to pass on — died in 2002, her coffin lay in state at Parliament’s Westminster Hall, and thousands of people filed past to pay their last respects.

Philip’s body will not lie in state, a function both of the pandemic and his own “no fuss” attitude. Nor will it be a state funeral, in keeping with his wishes.

The College of Arms, the body that oversees ceremonial protocol, said Friday that the duke’s body will lie at rest in Windsor Castle, 25 miles (40 kilometers) west of London, where he spent his final weeks with the queen. His funeral will be held in St. George’s Chapel at the castle, the site of centuries of royal burials — and royal weddings, including the 2018 union of Prince Harry and Meghan Markle.

“This is in line with custom and with His Royal Highness’s wishes,” the college said.

Buckingham Palace will announce later when the funeral will be held and how many people will attend. Funerals are currently restricted to 30 people or fewer under England’s coronavirus rules, so it's likely to be immediate family only.

It’s thought that Harry will try to travel from his home in Montecito, California, to say goodbye to his grandfather but he could have to navigate Britain's coronavirus rules.

Travelers from the U.S. must produce a negative COVID-19 test before they get on the plane and must self-isolate for 10 days upon arrival, but that quarantine can end early if a test after five days comes back negative. His wife Meghan is quite pregnant with their second child and is not expected to make the trip.

Some aspects of British life will pause until after the funeral, with run-of-the mill government visits and announcements suspended.

Britain’s political parties on Friday paused campaigning for next month’s local and Scottish elections, as Prime Minister Boris Johnson led political tributes. Lawmakers will return a day early from their Easter break so they can pay tribute to Philip in the House of Commons on Monday.