COVID shot not just a day at the beach in NJ, but all summer 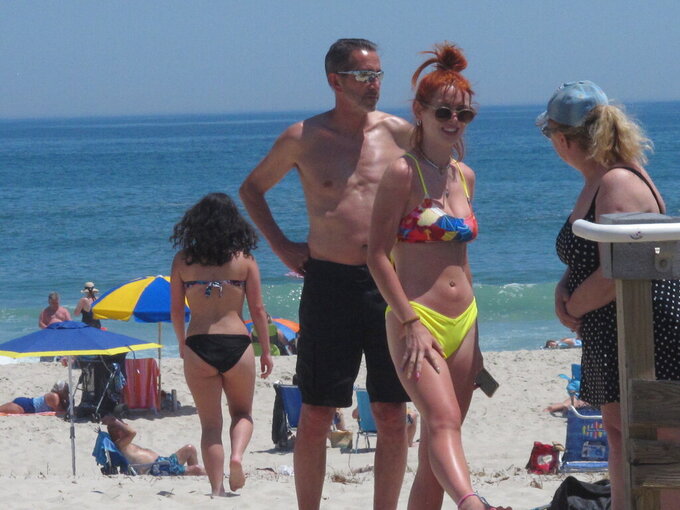 Beachgoers stand on Island Beach State Park in New Jersey as Gov. Phil Murphy announced that the state will give free season-long admission to the park and other state parks to any New Jersey resident who has gotten at least one dose of COVID-19 vaccine by July 4 on Wednesday, May 19, 2021. (AP Photo/Wayne Parry)

ISLAND BEACH STATE PARK, N.J. (AP) — Some say getting the COVID-19 vaccination is no day at the beach, but they're wrong: Getting the shot in New Jersey will get residents an entire summer at one of the state's most popular beaches, free of charge.

New Jersey Gov. Phil Murphy went to Island Beach State Park on the Ocean County coastline Wednesday to announce a series of incentives aimed at convincing more people to get vaccinated against the virus.

The most lucrative: A free season pass to any state park — including Island Beach State Park — for anyone who has received at least one shot by July 4. Eligibility includes those who have already gotten shots before the initiative was announced.

The Democratic governor also announced two other incentives, including a free glass of wine at one of nine participating New jersey wineries, and the chance to win dinner with the governor and first lady Tammy Murphy either at Drumthwacket, the governor's mansion in Princeton, or at the governor's beach house at Island Beach State Park.

“A season pass would cost you $50,” Murphy said at the oceanfront park, as a school of dolphins glided by in the distance. “But the state vax pass is free for doing the right thing and helping us end this pandemic.”

Starting May 27, people can go to www.nj.gov/vaxandvisit to apply for the free season parks pass, which will be emailed.

It applies to residents who get their first dose of vaccine in May.

The governor said more than 3.9 million New Jerseyans are already fully vaccinated. The state's goal is to increase that number to 4.7 million by June 30, he said.

Earlier this year the state rolled out a similar initiative involving free beer at some of the state's microbreweries for the recently vaccinated.