Coyotes looking to build off first playoff run in 8 years 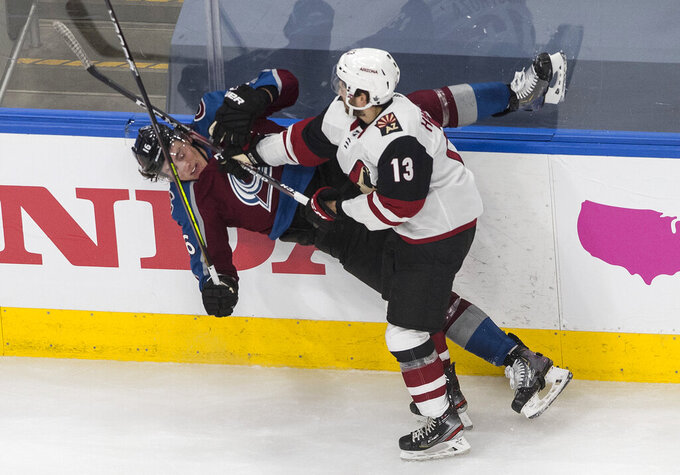 GLENDALE, Ariz. (AP) — The Arizona Coyote achieved a long-awaited goal by reaching the postseason for the first time in eight years. They won a series, knocking off the higher-seeded Nashville Predators in the Stanley Cup qualifiers.

The Coyotes managed to keep the first three games close thanks to Darcy Kuemper's stellar goaltending but were viciously bounced out of the Edmonton bubble by a combined score of 14-2 in the final two games.

The lopsided losses will certainly leave a sour taste throughout the offseason, however long it lasts.

Longer term, the experience of playoff intensity could be a huge boost for a franchise that's been trying to regain footing since reaching the 2012 Western Conference finals.

“Anytime you get playoff experience, it's going to help you down the road,” Coyotes forward Derek Stepan said. “Obviously, losing the last two games the way we did, I hope it sticks in their brain just how important every little play matters, every little detail matters this time of the year. If there's any doubt, any questioning within your lineup, it exposes you.”

Arizona made the biggest splash of last offseason, trading for high-scoring forward Phil Kessel. The Coyotes landed another talented offensive player around the trade deadline, picking up Taylor Hall in another deal.

Arizona started the season strong and looked like a playoff team, but an injury to Kuemper sent it tumbling to 11th in the Western Conference when the season was halted by the coronavirus pandemic.

The Coyotes earned a reprieve when the NHL expanded the postseason bubbles to 12 teams in each conference and they capitalized, knocking off No. 6 seed Nashville in four games.

Arizona then kept Colorado, one of the NHL's highest-scoring teams, mostly in check through the first three games before being overwhelmed by an avalanche of goals to get bounced from the Edmonton bubble.

“It's a great learning experience we got and hopefully we can carry it into next season and learn something,” Coyotes captain Oliver Ekman-Larsson said.

One of Arizona's top priorities of the offseason will be finding a replacement for general manager John Chayka.

Considered one of the NHL's best GMs, Chayka resigned right before the Coyotes left for Edmonton after his relationship with owner Alex Meruelo soured.

Arizona promoted assistant GM and former player Steve Sullivan to interim general manager and will likely give him a long look for the permanent job. The Coyotes may also open up their pocketbook to try landing a top-name GM, something Meruelo has proved willing to do.

Kuemper earned an All-Star nod last season and was one of the NHL's top goalies early this season before a lower-body injury sidelined him in December. Kuemper thrived in the Nashville series and kept Arizona in the Colorado series almost singlehandedly the first three games.

The Coyotes left Kuemper alone on an island for much of the final two games and he couldn't keep bailing them out.

An ugly ending, but Kuemper still had a strong season, finishing with 29 wins and a 2.22 goals-against average.

Hall, Carl Soderberg and Brad Richardson will be free agents, so the Coyotes will have some key offseason decisions to make.

Arizona would love to re-sign Hall, a former Hart Trophy winner, and Meruelo already met with him at least once. Hall finished with 10 goals and 17 assists in 35 games with Arizona.

Soderberg was a steady influence for the Coyotes after being traded from Colorado prior to the 2019-20 season, finishing with 17 goals and 18 asssits.

Richardson has been a key cog in the desert when he's been healthy the past five years, but turned 35 this year.