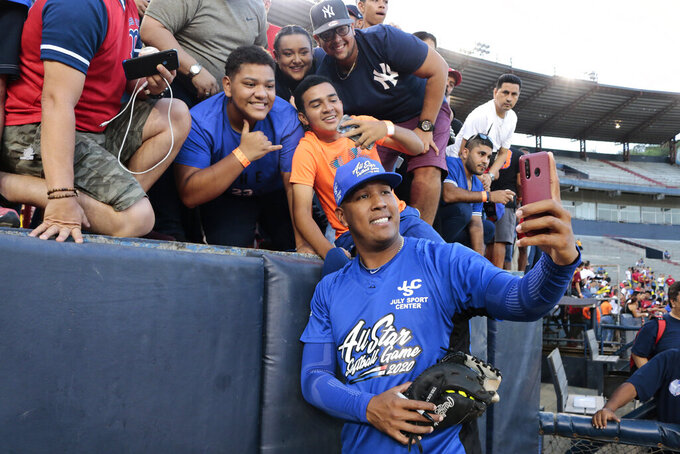 FILE - In this Jan. 11, 2020, file photo, Kansas City Royals' Salvador Perez takes a photograph with a fan's cellphone prior to an All-Star exhibition softball game at Rod Carew stadium in Panama City, Panama. When the virus wanes enough to allow the games to begin again, the very essence of these events will likely be missing. “You know how much I love to talk to the fans, you know? To be in conversation, to throw the ball to kids,” Kansas City Royals catcher Salvador Perez said. (AP Photo/Eric Batista, File)

The roar of the crowd has been such a staple of major sports, such an advantage for the home team, that NFL clubs have been accused at times of artificial amplification. The Atlanta Falcons even admitted to the mischief, leading to a 2015 punishment from the league.

When the coronavirus risk wanes enough to allow games to begin again, something besides the fans will be missing: The very essence of these events will be gone, too, at least for a while. No cheers, no boos, no chants or whistles. No one behind the backboard trying to distract a free-throw shooter. No kids seeking autographs.

Playing in empty buildings, for these well-paid performers, will require a significant recalibration.

“You know how much I love to talk to the fans, you know? To be in conversation, to throw the ball to kids,” Kansas City Royals catcher Salvador Perez said, hoping a baseball season will come to pass. "It’s going to be hard. It’s never happened before to me. If that’s going to be the best way to start playing, we have to do it, but I don’t think I’m going to feel good the first couple of games with no fans.”

One NASCAR driver called fan-less sports “weird” and he won't be the last. Even when there is the green light to reopen the gates to the public, near or full-capacity attendance figures are not likely for some time. Temporary caps on the amount of fans who can come in are expected, with the goal of maintaining social distancing.

Michigan State athletic director Bill Beekman said national consultants have advised between 17% to 35% capacity at football stadiums for now, depending on layout. The combination of an economic downturn and skittishness about germ spread might naturally keep crowds smaller, too.

“Sure, it would still be guys competing at their highest level and their hardest, because that’s what we do,” said Minnesota Wild center Eric Staal, who won the Stanley Cup with Carolina in 2006. “But as far as comparing it to a full building in a Game 7, there’s no comparison.”

Strength and stamina. Speed and agility. Focus and determination. Experience and preparation. All that factors in to success on the field, court or rink. Adrenaline is also an ingredient, though, and athletes might have to learn how to play with a little less than they've been used to. LeBron James declared he had no interest in playing in front of empty seats before walking that back to being simply disappointed.

“I feel like the fans pick you up,” Los Angeles Rams defensive tackle Aaron Donald said. “The fans are what makes the game exciting. The fans would give you that extra juice when you’re tired and fatigued. When you make that big play and you hear 80,000 fans going crazy, that pumps you up. If you don’t have that in the game, I think that just takes the fun out of it.”

The players may need to revert to those school-age days of summer when a complaint about boredom might have prompted this familiar challenge from a parent: Make your own fun.

"When I was in college, we would go and play like Purdue, and there wasn’t a lot of fans in the stadium, and our coach would say, ‘Y’all have got to bring your own juice today,’ because there’s no electricity in the crowd,” said Green Bay Packers safety Adrian Amos, who played at Penn State.

Edmonton Oilers defenseman Darnell Nurse was pondering this recently in light of the widely viewed ESPN documentary, “ The Last Dance,” about Michael Jordan and the 1997-98 Chicago Bulls.

“That’s a perfect example, his mindset in a lot of those games of creating your own environment, creating your own fire,” Nurse said. “That’s a test everyone who is in this situation is going to have to go through: Having to create your own excitement. There shouldn’t be a whole lot that you need to get you going, because you are still playing for a Stanley Cup. Yes, there are no fans there, and you might be in a hub city, but there is an opportunity to win a Stanley Cup."

The recipe for success?

“The team or the teams that get over that the quickest and buy into the format and the fact that it’s not changing and we’ve just got to get on with it,” said Winnipeg Jets right wing Blake Wheeler, anticipating the NHL's 24-team postseason tournament that will be held behind closed doors in two yet-to-be-determined cities. The NBA is planning a 22-team format in Orlando, Florida.

For all the atmospheric change that would come to the games themselves, it's worth noting just how much time teams spend rehearsing with nobody there to root them on.

“We practice every day in an empty grass area and pump in fake crowd noise for away games,” Minnesota Vikings quarterback Kirk Cousins said. “Honestly, to go out and just play the game would kind of be refreshing, a breath of fresh air, to just let us know that we don’t have to have all the smoke and the fire. We can just play football.”

Road games would certainly become easier for Cousins and his blockers and their peers around the NFL, suddenly able to hear all the pre-snap strategy without worrying about a false start penalty. In Germany, where the Bundesliga soccer season has resumed without fans, players have been able to pick out some positives despite the letdown in energy level.

A little bit like the days of youth leagues.

“Maybe the focus is more on the game. It’s not like a show,” Kimmich said.