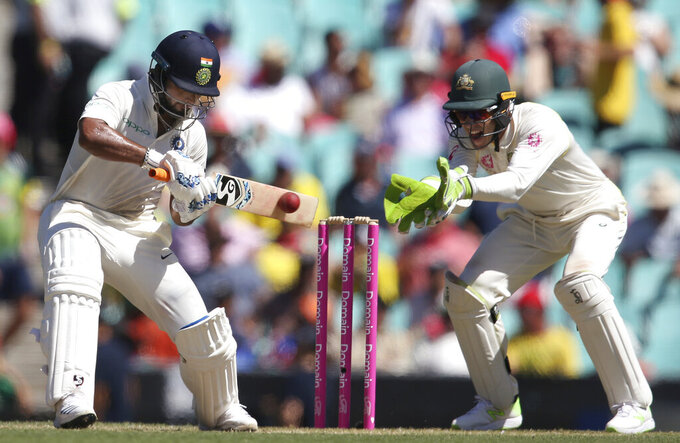 In this Jan. 4, 2019, file photo, India's Rishabh Pant, left, plays a shot in front of Australia's Tim Paine on day 2 during their cricket test match in Sydney. Cricket Australia is considering an expanded five-test series against India next season and is still planning to host the Twenty20 World Cup later this year, even if it has to be staged in empty stadiums. (AP Photo/Rick Rycroft, File)

BRISBANE, Australia (AP) — The prospect of a five-test series between Australia and India is gaining traction as cricket authorities contemplate ways of making up for lost time when the peak of the coronavirus pandemic has passed.

Cricket Australia chief executive Kevin Roberts says all options will be considered for hosting India, the sport's major income generator, in December and January. That could include playing all games between Australia and Virat Kohli's India squad in one venue.

Australia is also pushing ahead with plans to stage the Twenty20 Cricket World Cup, which is slated to run Oct. 18 to Nov. 15.

“If you contemplate the prospect of the international season in particular being affected, we have an issue of (losing revenue of) hundreds of millions of dollars on our hands,” Roberts said during a teleconference on Tuesday. “We’ll be doing everything possible to launch and stage a season in 2020-21.”

That could include a T20 World Cup devoid of fans at games.

“What we do know is that the bigger returns from the broadcast rights around the event that are generated by the ICC are very important to all of our counterparts around the cricket world," Roberts said. “So it’s incumbent on us to do everything possible to stage and host the T20 World Cup.”

All sports leagues are on hold in Australia and strict border and travel restrictions have been imposed amid the pandemic, including bans on international visitors.

The National Rugby League staged two rounds in empty stadiums last month before the competition was postponed. The NRL is planning to relaunch the season in late May in a heavily modified competition, although there are strong critics of the push. The Australian rules Australian Football League played one round before the suspension, and is hoping to restart in June.

The women's T20 World Cup final, which Australia won by 85 runs over India in front of more than 86,000 people at the Melbourne Cricket Ground on March 8, was the last major sports event staged Down Under before the strict social distancing rules were imposed.

Cricket is in the off-season in Australia, but the game's governing body has already stood down most staff and slashed salaries in case the situation deteriorates.

Worldwide the virus has infected nearly 2.5 million people and caused more than 170,000 deaths, according to a Johns Hopkins University count. Australia has had more than 6,500 cases and 67 deaths, although the infection rate has been decreasing and speculation is increasing that tight restrictions may start to ease.

Australia and India have regularly met in four-test series but administrators in both countries want to expand on the growing rivalry. Australia's oldest and fiercest rivalry is the Ashes series against England, which is played over five tests.

Roberts said the relationship between Australian officials and the Board of Control for Cricket in India is strong, and both sides are committed to stages five-test series in the future. The lucrative Indian Premier League T20 competition has been postponed, and the timing of that could be a factor in scheduling.

“We won’t rule anything out in terms of the Indian series. Along with the BCCI and Indian players, we want to stage a series that inspires the cricket world, whether or not there are people in the stands," he said. “We need to face into all possibilities. Fortunately, we have a little bit of time to work out scenarios."