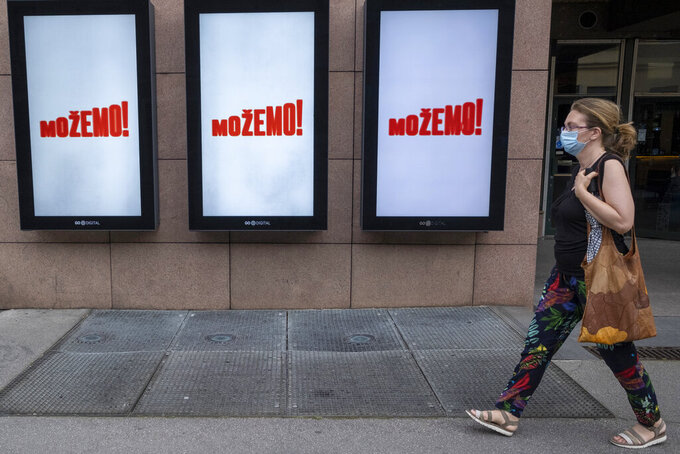 A woman walks past electoral posters of a new green-left coalition led by the Mozemo, or We Can group, in Zagreb, Croatia, Thursday, July 2, 2020. Croatia is holding a parliamentary election on July 5, 2020, with no clear winner in sight as the ruling conservatives' bid for re-election faces a strong challenge from both liberal and right-wing groups. (AP Photo/Sasa Kavic)

ZAGREB, Croatia (AP) — Croatia is holding a parliamentary election this weekend amid a coronavirus outbreak and with no clear winner in sight as none of the main contenders appears set to garner a majority of votes.

The ballot on Sunday will take place as Croatia, like other parts of Europe, contends with a renewed spike in reported virus cases that followed the reopening of borders and easing of lockdown rules.

The country's current conservative government, which initially handled the public health crisis relatively successfully, has sought continued support from voters. But polls have suggested a liberal coalition has a slight lead over the ruling Croatian Democratic Union.

Here is a look at who's who on Croatia's political scene and what's at stake:

WHO ARE THE MAIN PLAYERS?

The governing Croatian Democratic Union, or HDZ, has dominated the political scene since steering Croatia to independence in 1991 from the former Yugoslavia and through the war that followed.

Staunchly nationalist in the past, the HDZ has moved toward the conservative center under the leadership of Prime Minister Andrej Plenkovic. The shift has alienated some of the party's right-wing supporters.

The party's main challenger for the right to govern is the center-left Social Democratic Party, which allied with several smaller groups to form a joint Restart candidates' list. The alliance has urged voters to choose a new beginning as opposed to the ruling party's message of choosing a safe bet.

The Social Democratic Party led the Croatian government a few times in the past, and its candidate won the second round of the country's presidential election in January. Restart has topped pre-election polls, but analysts say the conservatives are not far behind.

WHO ELSE IS IN THE GAME?

None of the remaining parties are as strong as the main players, but two new groups have emerged in the election from both the left and the right.

The right-wing Homeland Movement, which is led by folk singer Miroslav Skoro, is believed to be chipping away votes from the ruling HDZ party. Skoro ran for president last year and finished third in the election's first round.

On the left, a new green-left coalition led by the Mozemo, or We Can group, has gathered civic activists and gained ground particularly in the capital, Zagreb. The group has attracted voters who are disappointed with the center-left SDP's record in politics.

WHAT COULD HAPPEN AFTER THE VOTE?

If predictions prove right and no party gains a majority of the future parliament's 151 seats, a coalition government will have to be formed. This means post-election negotiations could take a while before a new Cabinet takes office.

Analysts think a right-wing coalition is more likely to emerge between the conservatives and Skoro's movement. The center-left Restart might try to form a majority with liberal Mozemo and other smaller groups, if they win enough seats.

The predominantly conservative Catholic nation of 4.2 million people is best known for its beautiful Adriatic Sea coast and hundreds of islands that are usually packed with tourists during the summer holiday season. The walled city of Dubrovnik, the location of the fictional King’s Landing in the TV series “Game of Thrones,” is a globally famous destination.

Croatia's economy remains among the weakest in the European Union, and the country is struggling to avoid huge financial damage from the loss of tourism during the coronavirus pandemic. The last country to be admitted to the EU, Croatia also is a member of NATO.

WHAT IS THE VIRUS SITUATION?

Croatia's is seeing a spike of several dozen new cases of infections daily, but authorities say the situation is under control. Prime Minister Plenkovic has appealed to all right-leaning voters to continue backing his government, saying “This is no time for charlatans."

While Croatia had reported fewer than 3,000 virus cases and 110 deaths in all as of Thursday, Plenkovic's team was shaken after a cluster of new cases came out of a tennis tournament organized by top-ranked Serbian player Novak Djokovic in the coastal town of Zadar.

Several players, including Djokovic, have tested positive for the virus and Plenkovic faced criticism for not isolating after meeting them.

HOW IS VOTING ORGANIZED?

Polls open at 0500 GMT on Sunday and close 12 hours later. Exit polls are expected to be available immediately after polls close, while preliminary official results will start coming in an hour or two later.

Analysts say the virus outbreak could lead to low turnout among Croatia's 3.8 million voters. Authorities have urged voters to bring their own pens and to stay home if they have fevers. Face masks and hygiene supplies are mandatory at the polling stations.