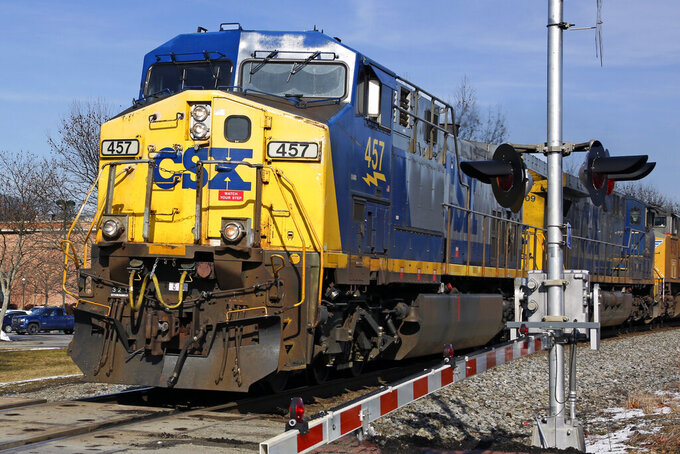 FILE - In this Feb. 12, 2018, file photo a CSX freight train passes through Homestead, Pa. CSX Corp. said its first-quarter profit declined 8% as expenses increased, but the railroad said it expects the economy to strengthen further over the rest of the year. The Jacksonville, Florida-based company said Tuesday, April 20, 2021, that it earned $706 million, or 93 cents per share, during the quarter. (AP Photo/Gene J. Puskar, File)

OMAHA, Neb. (AP) — CSX Corp. said its first-quarter profit declined 8% due to higher expenses, but the railroad said it expects to benefit as the U.S. economy strengthens further over the rest of the year.

The Jacksonville, Florida-based company said Tuesday that it earned $706 million, or 93 cents per share, during the quarter. That's down from $770 million, of $1 per share, a year ago.

The results fell short of Wall Street expectations. The average estimate of six analysts surveyed by Zacks Investment Research was for earnings of 95 cents per share.

CSX reiterated that it expects volume to grow this year at a faster pace than the U.S. economy, which is the midst of a recovery from the impact of the coronavirus pandemic. The railroad also said it expects revenue to grow by a rate in the low double digits this year because its customers are shipping more.

“We entered this year cautiously optimistic about the potential for an improving economic environment. And I am pleased to see momentum steadily building over the last few months,” CEO Jim Foote said. “It’s nice to finally have an economic tailwind at our backs.”

Foote said there is less uncertainty about the economy now than there was at the start of the year, and the railroad's customers are saying they expect the second half of 2021 will be stronger.

The freight railroad's revenue declined 1% to $2.81 billion in the period, which matched forecasts. Volume was up about 1% over last year's first quarter, but revenue fell across automotive, chemical and coal shipments.

CSX said its expenses increased 2% to $1.71 billion in the quarter as it spent more on salaries, fuel and materials as it dealt with severe winter weather and a spike in coronavirus cases.

Edward Jones analyst Jeff Windau said the quarter was disappointing but CSX should be in good position to take advantage of growing volume throughout the rest of the year.

CSX shares have climbed nearly 9% since the beginning of the year. They slipped about 1.7% in after-market trading following the release of the earnings report.

Foote declined to comment on the merits of the two competing proposals from Canadian railroads that are trying to acquire Kansas City Southern railroad because he hasn't seen all the details of the offers from Canadian National and Canadian Pacific. But he said that consolidation has generally been good for the railroad industry in the past. CSX and each of the other major freight railroads today is the result of many previous mergers.

“I think in most circumstances, you find that consolidation has been good for the customer,” Foote said. But he said regulators will have to closely examine any proposed merger before it could be approved.