CT lawmakers greeted by protests at start of unusual session 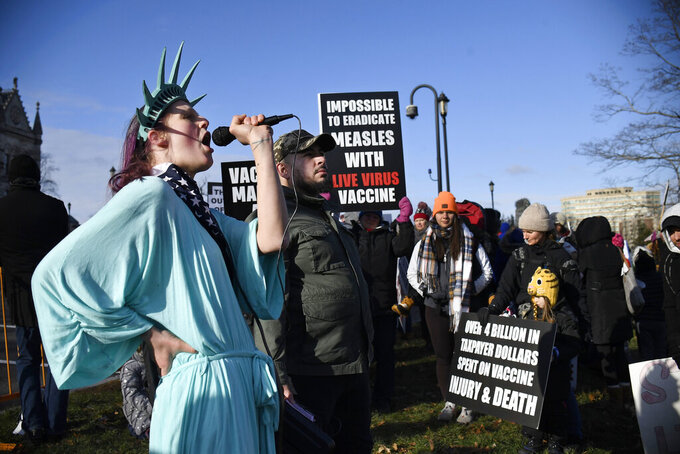 Jessica Smalley, left, of Shelton, protests outside on the State Capitol grounds, Wednesday, Jan. 6, 2021, in Hartford, Conn. Hundreds of protesters turned out for the swearing-in ceremonies. Many held up signs expressing support for President Donald Trump, or opposing any legislative effort to eliminate a religious exemption for vaccinations of schoolchildren. Others voiced support for the Black Lives Matter movement or pushed for racism to be declared a public health emergency. (AP Photo/Jessica Hill)

HARTFORD, Conn. (AP) — Greeted by hundreds of protesters waving signs, some chanting “you work for us,” Connecticut lawmakers on Wednesday officially convened what will be a highly unusual and possibly contentious legislative session that's expected to mostly take place in the virtual world as the COVID-19 pandemic continues to impact the state.

Despite the extraordinary circumstances, Democratic Gov. Ned Lamont urged the General Assembly during a pre-taped address to not allow COVID-19 to place limitations on this session. Rather, he called for legislation that expands the state's commitment to affordable housing, access to broadband, transit-oriented development, small businesses and allowing urban students to attend nearby suburban schools. He also called for legalization of recreational marijuana, sports and internet betting.

“I don’t want our state to be defined by a COVID crisis,” he said. “Instead, I want this to be the year we changed the narrative of Connecticut. Let this be the year of the Connecticut comeback.”

Democrats, who control the House of Representatives and Senate, appeared to agree with Lamont's desire to tackle major issues. Sen. Martin Looney, D-New Haven, who was elected by his colleagues to his fourth term as Senate President Pro Tempore, said besides adopting a new two-year budget that provides “significant” support for social services and public education, he called for local property tax reform, addressing inequities in health care and urban economic development, as well as an “urgent commitment to racial equity and social justice.”

The two top Republican leaders were less enthusiastic about taking on major issues outside of the budget and the pandemic, especially since members of the public will have limited ability to express their views to lawmakers. Beginning Thursday, legislative committees will meet on Zoom and YouTube. The state Capitol building has been closed to the general public since March.

“I don’t see how legalizing marijuana or sports betting helps people that are suffering from COVID. And while I think some of those issues will be taken up this session, I want to hear more about how we are going to get children back into schools if we’re going to see distance learning continue," said House Minority Leader Vincent Candelora, R-North Branford, who said Connecticut needs to do a “deep dive” in terms of addressing the state’s budget challenges.

Many of the protesters on Wednesday, a varied group that numbered about 500 people, voiced concern about a legislative effort to eliminate the state's religious exemption from required vaccinations for schoolchildren — concerns that have become even more heightened as the COVID-19 vaccine is being distributed. Some held signs that read “God is my scientist,” “let me call the shots” and “my body, my choice.”

Maria Altamura, an expectant mother with a 2-year-old from Stamford, held a sign that read: “The immune system is NOT a conspiracy theory.” She said she's upset that state lawmakers hope to pass legislation that will “take away” her religious rights.

“I feel like the government is really overreaching into our rights as human and as citizens,” she said. “And I think that and hope and really pray that people start to wake up and start to fight for our rights. Because little by little, they’re being stripped away.”

Unlike the scene later in the day in Washington, the protest in Hartford was mostly peaceful. Shouts could be heard from protesters who remained behind steel fencing as House and Senate members took the oath of office outside on opposite sides of the building for social distancing purposes. State Capitol Police made one arrest, charging a woman with breach of peace for spitting on someone during a verbal confrontation.

Staff members at the legislative complex have been working for months planning for what will be an unusual 2021 session.

“I look at it as historic,” said Jim Tamburro, executive director of the Office of Legislative Management. “People will be talking about this session for years and years and years, probably forever, when they look back and say, 'What the heck happened in 2020-21? How did they handle that?’”

This story has been corrected to add “because” to a quote, replacing the erroneous word “this” and to correct the spelling of a person’s last name in the story as Altamura, not Altmura.