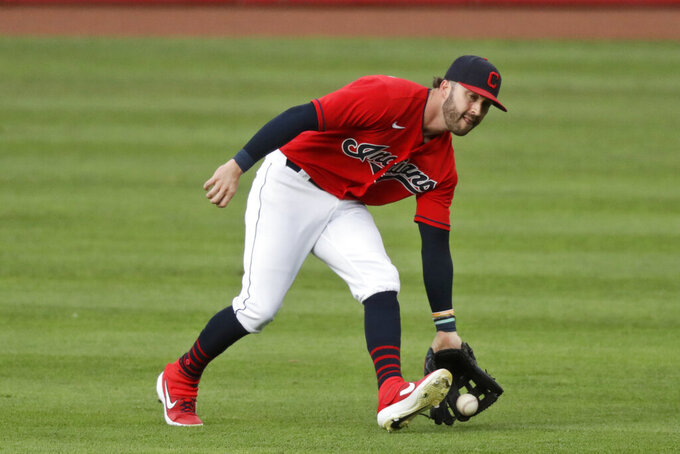 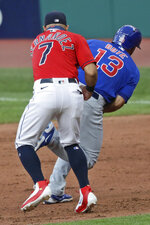 CLEVELAND (AP) — Bell bottoms were in style and Nixon was in the White House the last time the Chicago Cubs started a season this hot.

Their rookie manager isn't taking any credit for the fast start.

Kyle Hendricks pitched six strong innings in his first appearance against Cleveland since Game 7 of the 2016 World Series and Anthony Rizzo homered, leading the Cubs to a 7-2 win over the Indians on Wednesday night to match their best start in 50 years.

Hendricks (3-1) didn't have much trouble with the slumping Indians, who came in batting a major league-worst .192. He allowed one run and seven hits — threw 18 straight strikes in one juncture — and handled everyone in Cleveland's lineup but Franmil Reyes, who got three hits.

Since taking over, Ross has preached about being positive and energetic and the constant chatter coming Chicago's dugout is evidence his players are listening.

“There is nothing to complain about because the talent’s there, the character’s there, the commitment, the focus, the energy, the work,” Ross said. “It's not easy, especially in the environment we’re dealing with now. I’ve got really good players, man.

“I just put them in the lineup and I start trying to cheerlead them on. They’re really good.”

Rizzo homered in the third off Carlos Carrasco (2-2), David Bote drove in two runs and Kris Bryant connected for a 430-foot shot as the Cubs swept the two-game interleague set.

Hendricks hadn't faced the Indians since Nov. 2, 2016, when he started the dramatic finale as the Cubs beat the Indians in extra innings to clinch their first Series title since 1908. The right-hander is as efficient now as he was four years ago.

“I’m just happy that we are where we are right now,” he said. “You never know why things click at a certain time. I think we missed baseball so much being out for so long that it just gave us that little breather, and guys are really just excited to be around each other and excited to be playing the game again.”

Carrasco was pulled in the fifth after a shaky, seven-walk outing over 4 1/3 innings. The right-hander struggled with his control from the outset, but he was able to work around two, two-walk innings without giving up any runs.

“He was really yanking a lot of fastballs to the lefties and away to the righties,” manager Terry Francona said. “Shoot, he was probably in the fourth inning and his strike-to-ball was even. There were a lot of walks. He was pitching out of danger the entire time.”

It's been a tough few days for the Indians.

Not only are they struggling to score, but they're still sorting through the situation with starters Mike Clevinger and Zach Plesac, who broke team rules and COVID-19 protocols when they left the team hotel in Chicago last weekend and risked exposure to the virus.

Francona did not say if the players have yet been tested. And as for their fractured relationship with teammates, Francona said that could take time to heal.

“I know that they’ve got some trust to earn back and they’re gonna have to earn that back,” he said. “I don’t know how easy that will be.”

Francisco Lindor and Javier Báez followed eerily similar paths to stardom. Both were born in Puerto Rico, moved to Florida and were drafted one pick apart in 2011.

They're close friends and two of the game's best middle infielders. Just ask Jason Kipnis, who played with Lindor in Cleveland and is teammates with Báez.

“They’re both better at baseball than me,” he said. “I don’t know what’s in the water over there, but these guys’ natural ability to play this game is astonishing. "

Cubs: OF Kyle Schwarber was scratched from the starting lineup with a bruised right knee suffered when he got hit with a pitch Tuesday. He struck out pinch-hitting in the ninth. ... Ross said feedback was positive on LHP José Quintana's simulated game. He cut his pitching hand while washing dishes at home last month. There is still no timetable for his return.

Indians: C Roberto Perez (shoulder) has been running and throwing at the team's alternate site in Lake County. Francona said Perez has not suffered any setbacks and the club could have him back soon.

Indians: Following their second off day in four days, Cleveland opens a three-game series in Detroit on Friday. Aaron Civale (1-2) starts the opener against Iván Nova (1-0).