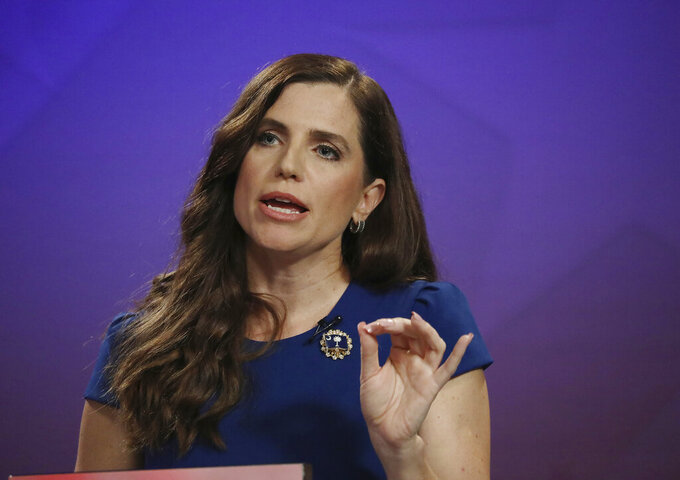 In their second and final planned debate for the 1st Congressional District seat in South Carolina, the surprise Democratic incumbent and his Republican challenger continued Tuesday to hit on the same themes of missing votes and the future of the Marine base on Parris Island.

The attacks were still there, but a bit softer. Republican challenger state Rep. Nancy Mace stuck to her line of attack over the past few weeks in saying U.S. Rep. Joe Cunningham's vote on a military budget bill meant he wanted to close Parris Island, the South Carolina site where Marines have been trained for more than a century.

That accusation opened the door for Cunningham to point out his bipartisanship. Six of the state's seven Republicans in the U.S. House and U.S. Senate voted with Cunningham.

The bill calls for the Marines to make sure women and men can go through basic training together at Parris Island in five years. Gender-integrated training already takes place in other military branches.

“That vote I took in no way endangers Parris Island. Those aren’t my words. Those are Sen. Tim Scott's words," Cunningham said of South Carolina's junior Republican U.S. senator.

The leader of the Marines told military.com last month that all options are on the table to bring men and women together for training, including closing Parris Island and a second base in San Diego and possibly build a new base.

Republican Gov. Henry McMaster said last week the state will do anything the Marines want to help renovate Parris Island so it can train men and women together. Other Republican leaders echoed there is no way the Marines would close their South Carolina base.

Cunningham, 38, stunned state and national political observers by winning the South Carolina coastal district that runs from Charleston to Hilton Head Island by more than a percentage point in 2018. It was the first time the district voted Republican in 40 years and the first U.S. House seat flipped by Democrats this century.

President Donald Trump won the district 54 percent to 40 percent for Hillary Clinton in 2016 — although that was the smallest margin of the six Republican controlled districts in South Carolina. The 1st District is also richer and better educated than most of the state.

Unlike their first debate where Mace, 42, accused Cunningham of denigrating single mothers when he pointed out Mace missed a number of votes during a special session in September, things were less personal on Tuesday.

Both candidates accused the other of lying. Mace tried to link Cunningham to more liberal U.S. House members, including Speaker Nancy Pelosi.

“He’s with her 90% of the time. That's not leading by example when you follow as a foot soldier or a lackey," Mace said.

Cunningham said he works with anyone who will help make the Lowcountry a better place, from Trump to Pelosi and said Mace kept bringing up the U.S. House Speaker because she didn't want to talk about her own record.

There were also questions about COVID-19. Both Mace and Cunningham contracted the coronavirus and agree that masks, hand washing and social distancing are the best ways to fight the disease.

But Cunningham pointed out Mace called Dr. Anthony Fauci a liar. Fauci is the infectious disease chief at the National Institutes of Health and has been one of the most prominent federal voices in fighting COVID-19.

“Dr Fauci did lie," Mace said. “He said masks don't work in February and then in March; I think we have to hold our elected officials accountable and those that serve the United States. That's why there was a lot of skepticism.”

WCIV-TV in Charleston produced the debate and aired it online.