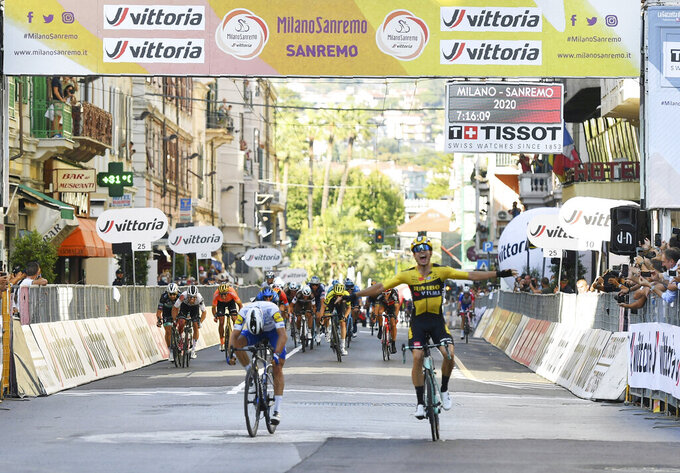 GENEVA (AP) — Cycling’s road world championships in Switzerland next month were canceled Wednesday after a government ruling on mass gatherings during the pandemic was extended until October.

However, cycling's governing body said it still hoped to find a new host for the event on the same dates of Sept. 20-27.

Swiss organizers of the championships, which were supposed to centered around Aigle where the International Cycling Union (UCI) is based, said they could not continue within a federal limit of 1,000 people for major events.

The decision followed the Swiss federal council extending the limit into a seventh and final month until Oct. 1 amid rising numbers of coronavirus infections in the Alpine nation.

Easing the rules in October helps Switzerland's two major sports leagues, soccer and ice hockey, which warned that their clubs need bigger crowds to survive financially. They can look to a new season now with more fans, likely facing mandatory orders to wear masks at stadiums, though with none from away teams allowed.

The new guidance came too late for cycling's first road worlds in Switzerland for 11 years, and follows the ice hockey worlds in May also being canceled.

The UCI will now search for a new host for the worlds, likely in Europe, on the same dates allocated in a congested calendar that aims to reschedule the major stage races and most one-day classics within three months.

“We will put all our energy into ensuring that these UCI world championships take place,” its president, David Lappartient, said in a statement. A decision was promised by Sept. 1.

The UCI is among the Olympic sports governing bodies hardest hit financially during the pandemic and said in April it needed to take “drastic action.”

World championships in several disciplines have been canceled and the 2020 Tokyo Olympics were postponed by one year. After the 2016 Rio de Janeiro Games, the UCI received more than $25 million in revenue sharing from the International Olympic Committee.

With coronavirus cases rising in Switzerland and elsewhere, local organizers in Aigle-Martigny also noted problems with riders and team officials from around 45 countries that currently face quarantine after entering Switzerland.

Swiss federal lawmaker Alain Berset said the situation was “delicate and uncertain,” on the day 274 new infections were reported nationally compared to around 15-20 cases daily in June.

The latest Swiss federal guidance gave some hope to the soccer and hockey leagues, which have warned clubs need bigger crowds at games and more revenue to help them survive financially.

Easing the federal limits was "of existential importance for our clubs,” said the league’s chief executive, Claudius Schäfer.

Professional sports teams will still need permission from public authorities in their home canton (state) to host events with more than 1,000 people present.

“The cantonal authorities may refuse to grant a permit if the local epidemiological situation or their contact tracing capacities do not allow it,” the Swiss federal council said.

The Swiss soccer season is due to start Sept. 11, though the league said it must now reconsider that program.

Advice is being prepared for clubs, the league said, to help regulate the flow of fans to and from stadiums, and collect contact details for tracing people in case of infections.