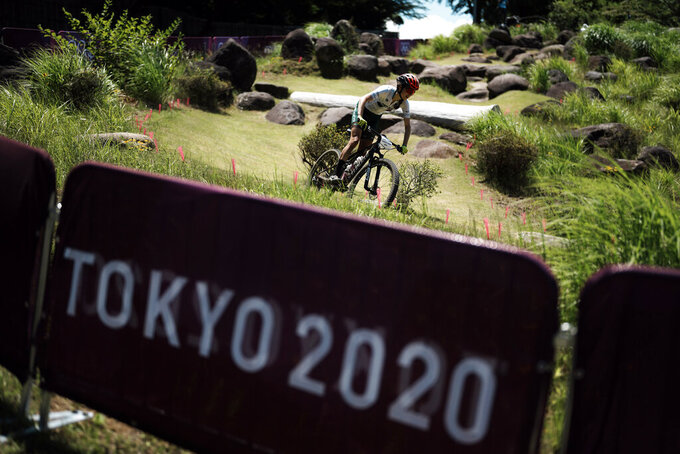 IZU, Japan (AP) — One thing that sets cycling apart from most other sports at the Olympics is the importance of technology.

With the exception of a few other sports, such as sailing and rowing, most events that take place at the Summer Games come down solely to the performance of the athlete.

They try to swim and run faster, jump and climb higher, lift and hit with more strength, and that is what determines whether they go home with a medal.

In cycling, the competition is so close — often hundredths of a second separates riders — that the difference in winning and losing can be found in the bike, the wheels, the kit and even the helmet that they choose to wear.

Want proof? After six hours of racing, silver and bronze in the men's road race Saturday was decided in a photo finish.

“Speed and winning are the name of the game,” said Bouker Pool, the chief commercial officer at USA Cycling, which has partnered for years with American manufacturer Felt Bicycles in researching and developing their Olympic steeds.

That's why federations and equipment partners spend each four-year cycle between Olympics doing everything they can to shave a few grams from their bikes, carve them into increasingly aerodynamic shapes and, perhaps most importantly, find a way to transfer every last watt from the pedal to the pavement in search of speed.

For high-profile teams such as the U.S. and Britain, that means an exceedingly expensive arms race.

The U.S. made headlines five years ago at the Rio Games, when it rolled out a radical track bike design that moved the entire drive train from the right side to the left. Researchers at Felt claimed that it made the bike better through the tight corners of the velodrome, giving the Americans a big advantage in endurance events.

It might not catch the attention of the average bicyclist, who probably can't think to themselves what side the drive train is on their own bikes. But it caused plenty of consternation from the UCI, the sport's global governing body, which doesn't always appreciate the way some nations think outside the box.

“We're pushing the boundaries of athletic excellence,” said Eric Sakalowsky, the vice president of marketing for Felt. “For us, it's all about the finish line, not the bottom line. There's a deep-seated passion for competition at Felt and we'll continue to take on projects like this so that we can take part in these athletes' passion for pushing our sports' limits.”

Sakalowsky's not kidding about the bottom line. Olympic rules state any bike used in competition must be made available to the public. But Felt only expects to sell a handful of its top-of-the-line track bike. Its price tag: $25,999.

“We don't have anything like that up our sleeve this year,” USA Cycling's Jim Miller said coyly, “but we'll have to see.”

While the Americans appear to be standing pat for Tokyo, the British have teamed up with bike maker Hope Technology and Lotus Engineering — yes, the designer of high-performance supercars — to create something entirely new.

Their cutting-edge track bike features wider seat stays, proprietary disk wheels, advancements in carbon fiber and other subtle advancements. And while the looks are sure to turn off some cycling purists, that's hardly the point.

The point is to go fast.

“I love the bike,” said Katie Archibald, a member of the reigning Olympic gold medalist women's pursuit team. "I love the image of the bike as well, the fact that you can come out with a question of how different looking it is.

“To me,” Archibald said, “it's like when Felt put the chain setup on the left-hand side of their track bikes. It's when something looks weird, I guess — yeah, it puts a swagger in your pedal. I do also love to ride it. It's fast. It's fun.”

It's not just track cycling, either. While most new road bike technology is unveiled earlier this summer during the Tour de France, some of it comes out again for the Olympics. In mountain biking, manufacturer Specialized created a special paint five years ago in Rio that changed colors from yellow to orange to red based on the temperature.

Throw in the skinsuits made of cutting-edge materials to cut down on drag, advanced lubricants for chains, and top-of-the-line helmets, sunglasses and shoes, and the investment needed to compete for a cycling medal can be staggering.

“This is the best time of the cycle because all the shiny bits come out. We're not holding back," said six-time Olympic gold medalist Jason Kenny of Britain. “We have our best bike, our best wheel, our best tire, our best kits on. This is it.”