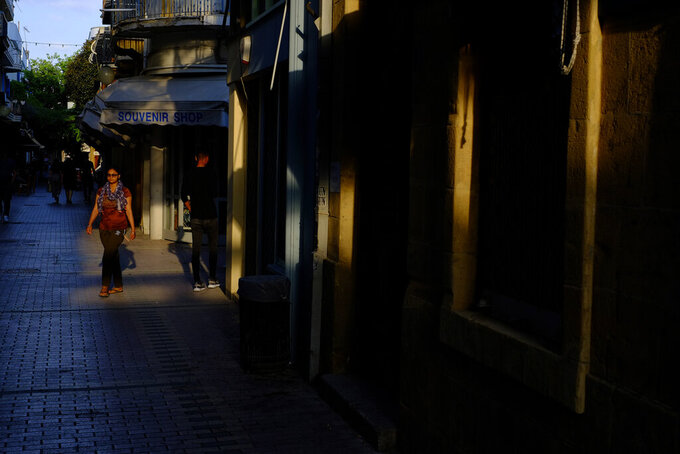 A woman walks past a closed souvenir shop in central capital Nicosia, Cyprus, Wednesday, June 3, 2020. Health Minister Constantinos Ioannou said the third phase of the country's gradual rollback of restrictions will be completed by June 24 instead of July 14. (AP Photo/Petros Karadjias)

Preliminary results showed significantly reduced levels of carbon monoxide and nitrogen oxides along a normally busy street and in a suburb of Nicosia between February and April compared to the same period last year. Both pollutants are produced by fossil fuel use.

The study by researchers at the Cyprus Institute’s Climate and Atmosphere Center showed that carbon monoxide levels dropped by 28% and 23% respectively along the street and in the suburb. Levels of nitrogen oxides dropped 57% and 67% respectively.

Most cars stayed off Cypriot roads between March and May during a government stay-at-home order that included a night-time curfew.

A recent study co-authored by Cyprus Institute Professor Jos Lelieveld that looked at pollution declines during COVID-19 lockdowns estimated that, up until mid-May, 50,000 premature deaths and nearly 90,000 pediatric asthma emergency room visits had been avoided in 34 countries.

A 2019 study also co-authored by Lelieveld estimated that nearly 800,000 people — 1,100 people in Cyprus — die prematurely each year in Europe because of dirty air and that the life of each citizen is cut short by an average of more than two years.

Air pollution, especially particulate matter, can cause respiratory and cardiovascular diseases as well as premature deaths.

“Reducing air pollution in the long-term in a sustainable way will require that the burning of fossil fuels is phased out,” Lelieveld said.