Czechs start to ease lockdown, youngest kids back to schools 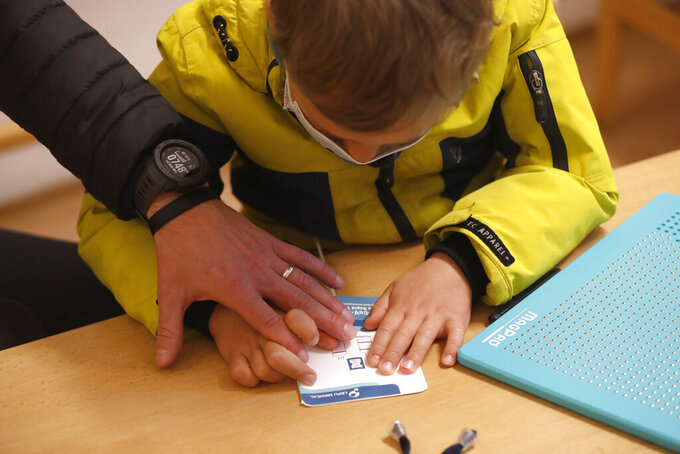 A young boy waits for the result of rapid COVID-19 test before entering his class at a kindergarten in Prague, Czech Republic, Monday, April 12, 2021. The Czech government has agreed to start easing the tight lockdown in one of the hardest-hit European countries and has given a green light for at least some children to return to schools. (AP Photo/Petr David Josek)

PRAGUE (AP) — As the coronavirus pandemic eases up in the Czech Republic, one of the European Union’s hardest-hit countries took its first steps on Monday toward easing of its tight lockdown.

Health experts, however, warned that the relaxation was going too far as infection and death rates still remain at dangerously high levels.

As of Monday, Czechs are allowed again to travel to other counties and a night-time curfew has ended. The tight restrictions had taken effect at the beginning of March as the Central European nation was desperate to slow down the spread of a highly contagious virus variant first found in Britain.

Children up to the fifth grade returned Monday to school under strict conditions. All have to wear face masks and be tested twice a week. They are also returning on a rotating basis at first, with in-school attendance one week and distance learning the next.

However, all schools remained closed in Decin county on the country's northern border with Germany, where health authorities discovered the first two cases of a variant first found in Brazil.

The Prague zoo's reopening will mark an end to an unusual period for the animals.

Despite a decline in new cases of COVID-19, the Czech Republic still has the fourth highest infection rate per capital in the European Union, according to the European Centre for Disease Prevention and Control.

At the last minute, Health Minister Petr Arenberger cancelled an original plan to allow up to 20 people to gather outdoors, and 10 to gather indoors.

An advisory group of scientists at the Health Ministry has strongly opposed that, saying it poses a risk.

“To limit gathering is one of the most effective measures to limit the pandemic,” said Jan Kulveit, a member of the group.

If the government approves it later Monday, only two people will be allowed to gather, indoors or outdoors.

The nation of 10.7 million has had 1.58 million confirmed cases with over 27,918 deaths. That leaves it with the highest number of cumulative deaths (259.7) per 100,000 people in the world, according to Johns Hopkins University.