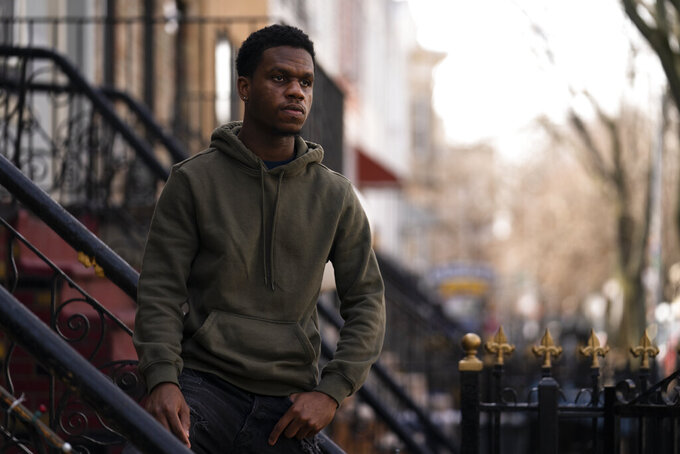 Mikel Haye poses for a portrait on his stoop, Friday, March 12, 2021, in the Brooklyn borough of New York. Haye, who was forced into performing a financial triage after he lost all three of his part-time jobs shortly after the pandemic struck. He was scrambling to pay the bills on a Brooklyn apartment he shares with his unemployed mother and two brothers while deciding how to spend whatever money was left: On food? The car insurance? His phone bill? (AP Photo/John Minchillo)

SAN RAMON, Calif. (AP) — Millions of U.S. households are facing heavy past-due utility bills, which have escalated in the year since the pandemic forced Americans hunkered down at home to consume more power.

And now, government moratoriums that for months had barred utilities from turning off the power of their delinquent customers are starting to expire in most states. As result, up to 37 million customers — representing nearly one-third of all households — will soon have to reckon with their overdue power bills at a time when many of them are struggling with lost jobs or income.

A study done by Arcadia, which runs a service that helps households lower utility bills, found that the average past-due amount by those in its network was roughly $850.

The crisis has emerged as one of the repercussions of the recession that was touched off by the viral pandemic. Though the economy has achieved considerable gains in recent months, about 9.5 million jobs remain lost. And many people have lost income even while remaining employed, leaving them unable to buy food, pay rent or afford utility bills.

President Joe Biden’s $1.9 trillion rescue aid package, enacted into law this month, will provide some support. It includes $5 billion earmarked for people who need help with power and water bills. Combined with other government financing allotted for energy aid since the pandemic began, the total available to help struggling households pay utility bills is about $9.1 billion.

But all that assistance represents just a fraction of the $27 billion in past-due balances of U.S. households, according to the National Energy Assistance Directors Association, which helps low-income consumers. The aid will be distributed through the Low Income Home Energy Assistance Program.

Caught in the squeeze are people like Paula Desper, who lives in Lancaster, Pennsylvania, with her husband and the youngest two of their five children, ages 7 and 10. Desper worries about how her family will manage once the utility shutoff moratorium lifts soon in Pennsylvania.

“It’s come to the point where I look at a bill, and either I’m going to pay a bill or I’m going to buy food,” said Desper, 45. “I’ve got two little children. I will go without food. My children will not.”

After the pandemic erupted, Desper's weekly hours and income were reduced by half. Her husband's work hours were cut, too. Unable to afford his car payments, he lost his vehicle.

With their sharply reduced income, Desper and her husband fell nearly $700 behind on energy bills and more than $1,100 behind on mortgage payments. In the meantime, she worries about being exposed to COVID at work, particularly because her 10-year-old daughter has asthma.

“I always wanted to do better for my children, and I feel guilty,” Desper said. “I have my moments where I cry because I feel hopeless. I feel like I did something wrong, even though I know it wasn’t my fault.”

Officials at agencies involved in financial aid for energy customers say the problem has become an urgent one.

“We have never had debts of this size before,” said Mark Wolfe, executive director for the National Energy Assistance Directors Association, which estimates that the total amount due has soared from roughly $11 billion, owed by nearly 20 million U.S. households at the end of 2019, to the more than $27 billion now.

Those findings mirror the study of electricity bills in 13 states and the District of Columbia by Arcadia, which helps households find renewable energy sources to lower their utility costs. It found that one-quarter of the households belonging to Arcadia’s network in those states had past-due balances on their electricity bills as of January, with the average amount owed nearly $850 — a 67% jump from the end of 2019.

Even bigger past-due bills have been emerging in New Jersey, said Kathy Kerr, director of utility assistance for the Affordable Housing Alliance. Before the pandemic, people who approached the organization seeking help typically had past-due balances of $800 to $1,000. Now, she said, it’s not uncommon to see past-due balances ranging between $2,000 to $3,000, reflecting a crisis that cast millions of people out of jobs, especially at restaurants, gyms, concert venues and small businesses and left them consuming more electricity at home.

Moratoriums on shutting off power for past-due households had existed in at least 35 states at some point during the pandemic. In response, some struggling consumers chose to funnel their money toward housing, food and other obligations because they knew they wouldn't lose their electricity or natural gas even if they skipped their utility payments.

Compounding the problem, American households have been using, on average, 10% more electricity during the pandemic lockdowns, which have kept them home more hours, with computers and other electronic devices, along with heat or air conditioning, swelling utility bills.

Now, the power shut-offs are beginning to lift, forcing customers to reckon with their piled-up bills. More than 30 states — including New York, Pennsylvania, Michigan and Wisconsin — are ending shutoff moratoriums in March and April, according to the National Energy Assistance Directors Association. California and New Jersey will do so at the end of June.

Some customers now facing outsize utility bills might have been lulled into the belief that they wouldn't have to pay for many additional months.

“There’s a moratorium,” said Tracey Capers, executive vice president of the Bedford Stuyvesant Restoration Corporation, a Brooklyn-based non-profit that offers financial aid and counseling. “It doesn’t mean you never have to pay. That’s the concern that we have for people.”

Among them is Mikel Haye, who was forced into performing a financial triage after he lost all three of his part-time jobs after the pandemic struck. Suddenly, he was scrambling to pay the bills on a Brooklyn apartment he shares with his unemployed mother and two brothers while deciding how to spend whatever money was left: For food? Car insurance? The phone bill?

The utility bill often went unpaid, leaving him at one point with a past-due balance of $500.

“We took a risk, thinking that hopefully they will extend more leniency when it came to paying that bill,” said Haye, 24.

In the end, things did work out for him. With the help of the Bedford Stuyvesant organization, he managed to pay his electricity bill.

Not as fortunate, thus far, is Yomaira Romelina Heredia Melo, who was a hotel supervisor until she lost her job in the pandemic. Though she's managed to stay current on her utility bill, she has fallen $10,000 behind on her Brooklyn rent. A mother of two, Melo worries about being able to continue paying her bills while her husband is stuck in the Dominican Republic awaiting clearance from immigration officials to return.

Utilities are sometimes willing to negotiate repayment plans with delinquent customers rather than cut off their power. Still, a more comprehensive solution is urgently needed, said Sen. Edward Markey, a Massachusetts Democrat, who notes that Black and Hispanic households are disproportionately vulnerable. Markey said he expects Congress to draft legislation this year to provide further financial help to people struggling with utility and other bills.

“This is a crisis that wasn’t created by consumers,” Markey told The Associated Press. “It’s potentially a tragedy for so many of these families that could have a traumatic impact on their lives.”

The unpaid balances can also be a burden for utilities themselves, because the bills must often be written off as tax losses if they can’t be collected. And Wolfe notes that if that happens, utilities will typically try to recover some of the money by pushing for rate increases that will affect all the households in their service areas, including low-income consumers who have managed to stay current on their bills.

Duke Energy, which owns utilities that provide power to about 25 million people across six Southeastern and Midwestern states, has warned that losses are likely from past-due accounts.

“I think we are going to have to find a way to forgive all this debt,” Wolfe said. “People have run through their savings during the pandemic, and now they are stuck. Even if you threaten to turn off their power, you still aren’t going to collect anything.”