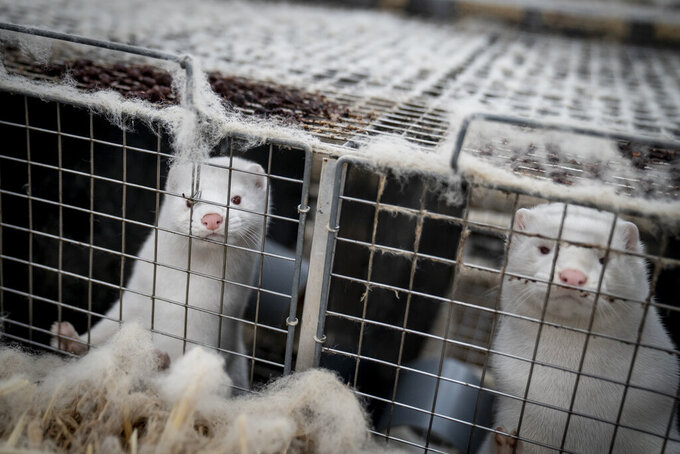 FILE - In this file photo dated Friday Nov. 6, 2020, mink look out from a pen at a farm near Naestved, Denmark. Danish Prime Minister Mette Frederiksen has appointed Thursday Nov. 19, 2020, a new agriculture minister, after Mogens Jensen resigned after the government ordered the culling of all Danish mink because of the coronavirus, but without having the necessary legislation in place first.(Mads Claus Rasmussen/Ritzau Scanpix FILE via AP)

COPENHAGEN, Denmark (AP) — Danish Prime Minister Mette Frederiksen appointed a new agriculture minister Thursday to succeed Mogens Jensen, who resigned after the government ordered the culling of all Danish mink without having the necessary legislation in place.

Development Cooperation Minister Rasmus Prehn was tapped to replace Jensen, who was in charge of agriculture and fisheries.

The mass cull was ordered after it was discovered that a mutated version of the coronavirus found among minks in Danish farms can be transmitted to people, though there is no evidence so far that it is more dangerous or resistant to vaccines. Earlier this month, authorities said that 11 people were sickened by it.

Other countries have noted the Danish example. The Irish government on Thursday recommended culling mink in Ireland despite tests for the virus not yielding any positive results to date.

The Department of Agriculture in Ireland said it had worked closely with the owners of the country’s three mink farms.

“Mink farmers continue to operate in full compliance with all legislative and animal welfare requirements and have co-operated fully with these efforts,” the department said in a statement.

The move followed the cull ordered in Denmark despite the government lacking a legal basis for killing healthy animals. The embarrassing oversight caused it to scramble to build political consensus for a new law that now has the backing of a majority in the Danish parliament.

The left-leaning parties that support the Social Democratic one-party, minority government said they no longer had confidence in 57-year-old Jensen, prompting his departure. The center-right opposition also expressed similar reservations.

The prime minister’s traditional presentation of a new government member to Queen Margrethe, who formally is the country's head of state, didn’t happen because one of Frederiksen’s family members had tested positive to the coronavirus.

In a statement, Frederiksen said that she will “out of an extra precautionary measure not meet the Queen,” neither will the outgoing agriculture minister.

Frederiksen who later tested negative, said she informed the 80-year-old monarch of the ministerial change by telephone.