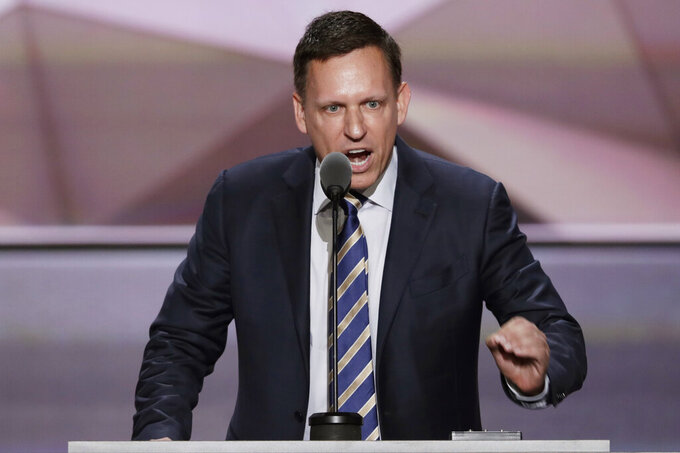 FILE - In this July 21, 2016, file photo, entrepreneur Peter Thiel speaks during the final day of the Republican National Convention in Cleveland. The Silicon Valley data-mining firm Palantir Technologies says it has confidentially filed to go public, setting up what could be the biggest public stock offering of a technology company since Uber’s debut in 2019. (AP Photo/J. Scott Applewhite, File)

The Silicon Valley data-mining firm Palantir Technologies confidentially filed to go public, setting up what could be the biggest stock offering from a technology company since Uber’s debut last year.

Founded in 2004 by investors including Peter Thiel, the company works with governments, law enforcement agencies and the defense establishment to organize and analyze huge volumes of data. The technology can be used to disrupt terrorist networks or battle human trafficking. Most recently, it was used by the White House to track coronavirus infections. Last year, Palantir won army contracts potentially worth hundreds of millions of dollars.

The company has stirred controversy for upgrading Immigration and Customs Enforcement software that has been used in the Trump administration’s deportation crackdown, which led to on-campus campaigns to discourage recruitment and the picketing of CEO Alex Karp’s home.

The Palo Alto company has attracted venture capital from investors including In-Q-Tel, the Central Intelligence Agency’s investment arm. It has been weighing going public for years, with reluctance coming from the added scrutiny to the secretive nature of much of its business.

In a prepared release late Monday, Palantir said it had submitted its filing to the Security and Exchange Commission for confidential review and that a public stock listing is expected afterward “subject to market and other conditions.”

With the U.S. stock market rallying in recent weeks, a number of tech companies have gone public including Vroom, which sells used vehicles online, and Lemonade, an insurance start up.