Dates locked in for India's cricket tour to Australia 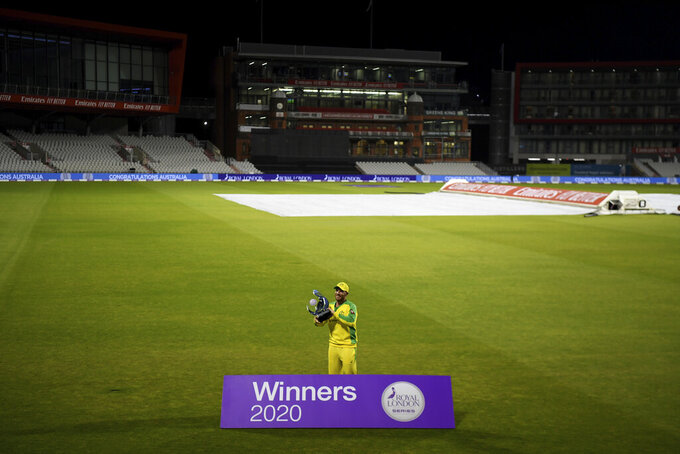 Australia's captain Aaron Finch poses with the winners trophy after their win in the third ODI cricket match between England and Australia, at Old Trafford in Manchester, England, Wednesday, Sept. 16, 2020. (Shaun Botterill/Pool via AP)

MELBOURNE, Australia (AP) — Cricket Australia has locked in dates for India’s tour Down Under after a lengthy delay while overhauling the schedule to meet the varying quarantine and COVID-19 pandemic travel restrictions in different states.

A four-test series, starting with a day-night match at the Adelaide Oval on Dec. 17, will be preceded by three one-day internationals and three Twenty20 internationals played in Sydney and Canberra from Nov. 27 to Dec. 8.

The Adelaide match to start the Border-Gavaskar Trophy series will be the first day-night test between top-ranked Australia and India, and also India’s first away from home.

“Across all three formats, Australia and India represents one of the great rivalries in world sport and we're delighted to welcome Virat Kohli’s outstanding squad to Australian shores this summer,” Cricket Australia’s interim chief executive Nick Hockley said Wednesday. He thanked the Board of Control of Cricket in India for its patience.

“We have worked closely with the BCCI for many months to bring this tour to life," Hockley said, "and I cannot speak more highly of the professional, thorough and collaborative manner with which they have approached this tour in these extraordinary and complex times.”

The tour was initially set to open with a test match at the Gabba, then there was a proposal to start with the limited-overs portion in Queensland state. That had to be revised again to move the white-ball series to Sydney and Canberra after Cricket Australia and the Queensland Government were unable to agree on quarantine conditions for players in Brisbane.

Leading players from India and Australia involved in the Indian Premier League, which is being played in the United Arab Emirates, are scheduled to arrive on a chartered flight in mid-November and go into 14 days of quarantine in a bio-secure hub that will allow them to keep practicing.

Most people arriving in Australia must undergo a strict hotel quarantine for 14 days.

“The safety of the Australian community and all participants is our highest priority and we will continue to work with governments across Australia to ensure the schedule proceeds in line with relevant directions and biosecurity protocols," Hockley said.

Victoria state is coming out of almost three months of lockdown following a second wave of COVID-19 infections, and the state government is set to allow fans into the Melbourne Cricket Ground for the traditional Boxing Day test, which will now be the second match in the series. Tests at the Sydney Cricket Ground (Jan. 7-11) and the Gabba in Brisbane (Jan. 15-19) will follow.

India hasn't played international cricket since losing a test series in New Zealand in early March, although it has won three of its last four test series against Australia — including its first ever series win in Australia in 2018-19.

Australia's men's squad was the first national sports team to leave the country following the coronavirus lockdown when it embarked on a short tour to Britain, which finished Sept. 16 with an ODI series win over World Cup champion England.