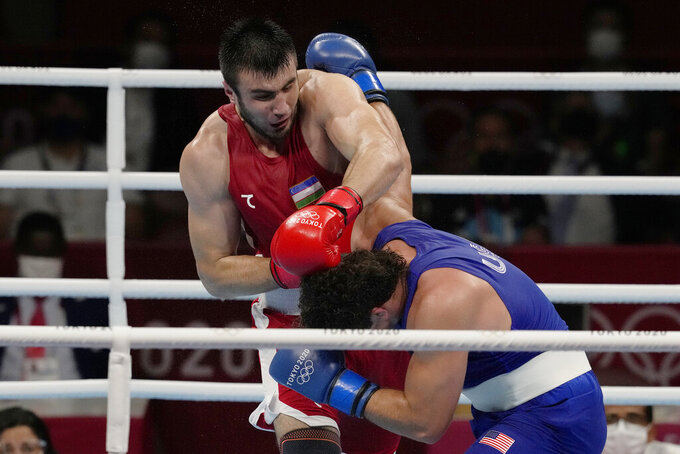 TOKYO (AP) — Richard Torrez Jr. stared up at 6-foot-7 Bakhodir Jalolov and didn't blink, courageously holding his own and staying on his feet against the most intimidating fighter in Tokyo.

Keyshawn Davis and Andy Cruz traded shots for three thrilling rounds, showing off some of the most polished boxing skills in the entire Olympics.

The final two Americans in the Tokyo field got agonizingly close to ending their team's 17-year men's gold medal drought Sunday, only to fall short against two of the best boxers who stepped into the Kokugikan Arena.

“We came in here and did some things that a lot of people probably thought we weren't going to do,” super heavyweight Torrez said after his 5:0 loss to Jalolov in the final bout of the tournament.

“We're putting boxing back into the USA," he added. "We're giving it a surge again. I can’t be more proud of my teammates. I do think we came out here and we fueled the amateur scene in the U.S.”

The team coached by Billy Walsh is leaving Tokyo with four medals — the most won by the U.S. since 2000. They also reached three gold medal bouts, more than any team since 1988.

Although they finished with three silvers, it was impossible to fault the efforts of Davis, Torrez and featherweight Duke Ragan against three elite opponents. International amateur success is a process that takes years, and Walsh's teams rarely get more than a few tournaments together before their top talents turn pro and it all starts over again.

“The guys on this team, they’ve been through a lot, me included,” Torrez said. “We usually only stay together for a year until another team comes in and it changes. Because of COVID, we got to stay together for a whole other year, and I think that helped us in our Olympic run."

Tyrell Biggs and Riddick Bowe are the only other Americans to win medals at super heavyweight, and Torrez was a striking figure in the division because of his size. Although he is hardly small at 6-foot-2, Torrez was the tiniest boxer in the super heavyweight field, and he fights in a cagey crouch that makes him look even smaller against giants like Jalolov.

Jalolov was an enormous obstacle, both physically and mentally: The Uzbek knocked Torrez unconscious when they fought in Russia in 2019.

Torrez got off to an outstanding start in the Olympic rematch before he forgot his game plan and began leaning too far forward in a rough second round.

“It's one of those bittersweet moments, and I have to blame myself,” the visibly heartbroken Torrez said. “It's a big dude. He's a great competitor. Being in the ring with him, it's not fun. ... Ever since I was 8 years old, I remember watching the Olympics with my dad. I was there. It just didn't go my way.”

Davis lost 4:1 in a close bout with Cruz, who claimed Cuba's fourth gold medal in Tokyo. The 3-0 professional who repeatedly said the Olympics would be “easy work” acknowledged he was only trying to motivate himself to gold.

Davis almost got there after sweeping the second round on all five scorecards. Cruz then swept the third and claimed gold.

“Leaving this tournament, I’m a completely different fighter,” Davis said “I’m glad I got to experience this Olympics, and it’s something I’ll remember for the rest of my life. I feel like I’m starting my career all over again. I’m a brand-new fighter. I’m worth way more than I was before, and I just can’t wait to do it again.”

Indeed, Davis is headed back to his pro career with Olympic recognition that boosts a fighter's promotional value exponentially. Torrez is about to seize the same opportunity.

“The pro thing does look like it's going to be upcoming very soon,” Torrez said.

The U.S. team was strong, but it didn't have the most impressive performance in Tokyo. Cuba claimed four golds with a trio of two-time champions, while Britain won six total medals to match Russia for the overall Olympic lead.

Jalolov, an 8-0 professional who trains in California, won the only medal for the vaunted Uzbek team, which topped the table in Rio de Janeiro and sent 11 fighters to Tokyo. While his teammates endured a disappointing series of defeats, Jalolov dominated every time he stepped into the Kokugikan ring, winning 5:0 in three bouts and earning a stoppage in the fourth.

Jalolov said he isn't in a rush to fight for a professional heavyweight title, even indicating he might fight in the world championships in Serbia this fall.

Price succeeded two-time gold medalist Claressa Shields of the United States as the champion of the largest women's weight class, while Harrington followed in the footsteps of Katie Taylor of Ireland, who won the inaugural lightweight gold in London.