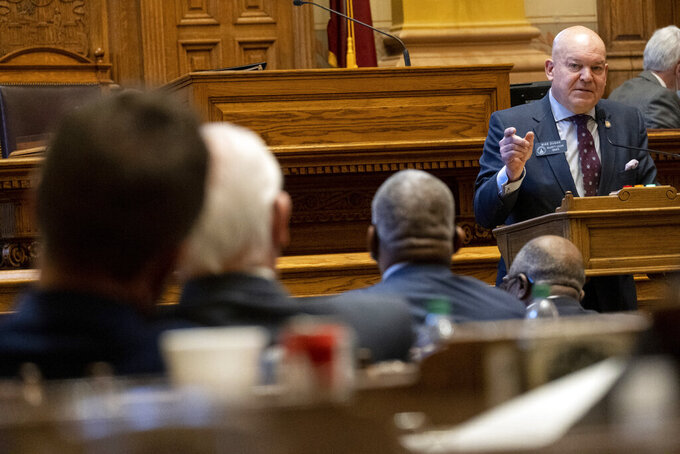 ATLANTA (AP) — Georgia lawmakers reached a key deadline on Monday, which was crossover day in the General Assembly. That's when bills and other measures must pass the House or Senate and move on to the other chamber. Some key proposals had already moved forward, like restrictive voting and elections bills. The Senate passed additional voting restrictions on Monday. A bill to strip the state labor commissioner of some powers sprang back to life Monday. The failed measures include an effort to impose new criminal penalties for some protesters. There are ways of reviving failed measures later by amending them to other bills. Because it's the first year of a two-year term, measures that don't advance this year could still pass next year. Here's a look at the status of some significant issues:

CITIZEN’S ARREST: House Bill 479 would abolish the Georgia law that allows private citizens to arrest someone, while still allowing security guards and store employees to hold people they accuse of a crime until police arrive.

INCOME TAX CUT: Georgia would raise the amount of money someone could earn before paying income taxes under House Bill 593, cutting overall taxes by $140 million.

PATIENT VISITATION: Hospitals and nursing homes would be required to allow patients at least one visitor, after many cut visitor access because of the coronavirus pandemic, under House Bill 290.

LABOR COMMISSIONER: Senators on Monday revived Senate Bill 156, which would create a chief labor officer to oversee unemployment benefits. The measure would cut into Labor Commissioner Mark Butler’s authority because lawmakers say his department has poorly handled a deluge of jobless claims.

SCHOOL VOUCHERS: Senate Bill 47 would broaden eligibility for a program that pays for children with special education needs to attend private schools. The House failed to consider House Bill 60, which would have created a new educational savings account program to provide vouchers for private schools and home schooling.

ADULT CRIMINAL AGE: The age for charging most people with adult crimes would rise from 17 to 18 in Georgia under House Bill 272.

HOME-SCHOOLED ATHLETES: Public schools would be required to let home-schooled students take part in athletics and extracurricular activities as long as they take at least one online course through the local school under Senate Bill 51.

LAWSUIT LIABILITY: House Bill 112 would renew until July 2022 Georgia’s law protecting businesses and others from being sued if someone blames them for contracting COVID-19.

HUMAN TRAFFICKING: Senate Bill 33 would allow victims or state officials to file civil lawsuits seeking money damages against traffickers while Senate Bill 34 would make it easier for people who have been trafficking victims to change their names.

DISTRACTED DRIVING: Georgia drivers wouldn’t be able to avoid penalties by telling judges they have purchased hands-free devices for their cellphones under House Bill 247.

DEFUND THE POLICE: House Bill 286 says cities and counties can’t cut spending on their police departments by more than 5% a year.

PORCH PIRACY: It would be a felony with mandatory prison time for people who steal packages off someone’s porch under House Bill 94.

HAZING: Senate Bill 85 would increase penalties for hazing, making it a felony to force people to participate in hazing when someone is seriously injured, including by alcohol poisoning.

TEACHER INCENTIVES: House Bill 32 would give a $3,000-per-year state income tax credit to some Georgia teachers who agree to work in certain rural or low performing schools.

EMERGENCY POWERS: House Bill 358 would require lawmakers to renew Gov. Brian Kemp’s emergency powers after 30 days, and then every 90 days after that in an effort to limit powers Kemp has exercised under Georgia’s public health emergency for nearly a year.

IN-STATE TUITION: House Bill 120 would have allowed some people without legal immigration status to claim in-state tuition at most Georgia universities and colleges.

TRANSGENDER SPORTS: Senate Bill 266 would have banned transgender girls from playing on girls sports teams in high schools. Proponents say those not born as women could have unfair advantages, but opponents say the proposal was illegal under federal law and cruel.

TERM LIMITS: Georgia voters would have been able to vote on limiting state lawmakers to serve 12 years per chamber and extending state senators’ terms to four years under Senate Resolution 37, a constitutional amendment. The measure would also have imposed a two-term limit on the lieutenant governor’s office.

STONE MOUNTAIN: Senate Bill 158 would have required that a “Let Freedom Ring” monument to civil, voting and human rights be built on Stone Mountain, home to a giant carving of Confederate leaders.

PROTEST RESTRICTIONS: Senate Bill 171 would have made blocking a highway during a protest a felony, raised penalties for other forms of protest and expanded the state's definition of illegal assembly. It never passed out of committee.

CASINO GAMBLING: None of the various measures that would authorize casinos passed out of committee.

HORSE RACING: None of the various measures that would authorize betting on horse racing passed out of committee.