Deadly clash in the Himalayas ups ante for China and India 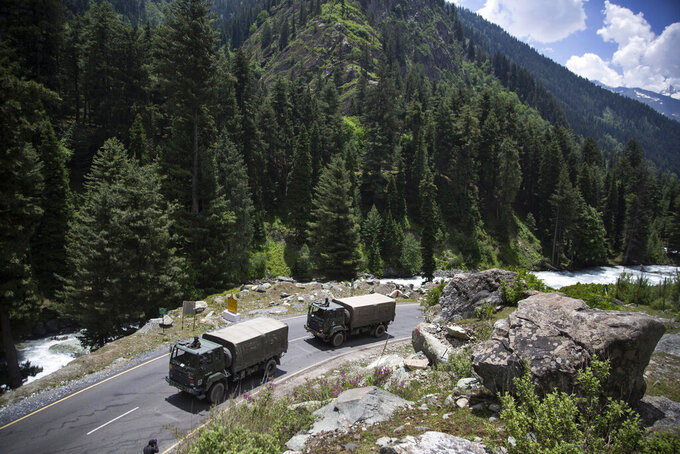 An Indian army convoy moves on the Srinagar- Ladakh highway at Gagangeer, north-east of Srinagar, India, Wednesday, June 17, 2020. Indian security forces said neither side fired any shots in the clash in the Ladakh region late Monday that was the first deadly confrontation on the disputed border between India and China since 1975. China said Wednesday that it is seeking a peaceful resolution to its Himalayan border dispute with India following the death of 20 Indian soldiers in the most violent confrontation in decades. (AP Photo/Mukhtar Khan)

NEW DELHI (AP) — India and China sought Wednesday to deescalate tensions after flexing their muscles in a clash along a disputed border high in the Himalayas that left 20 Indian soldiers dead.

The skirmish Monday in the desolate alpine area of Ladakh, in Kashmir, followed changes by India to the political status of Kashmir amid a geopolitical tug-of-war with the United States in the region.

Chinese officials said Wednesday that both sides had agreed to peacefully resolve their Himalayan border tension through dialogue. India should “not take unilateral actions that might complication the situation," said the Foreign Ministry in Beijing.

Prime Minister Narendra Modi said in a speech Wednesday that “India wants peace but is capable of giving a befitting reply.” He has called a meeting of India’s major political parties on Friday to discuss the China situation.

Twenty Indian soldiers, including a colonel, died of severe injuries suffered in sub-zero temperatures, Indian officials said, after the two sides threw rocks and traded blows in the culmination of a months-long standoff in the Galwan Valley near the Line of Actual Control that separates the two countries.

No shots were fired because neither side’s patrolling soldiers carry firearms, in accordance with the terms of the unresolved border dispute, Indian officials said, speaking on condition of anonymity because they weren’t authorized to disclose information.

Still, it was the worst violence since 1962, when a war over completing claims on the remote Himalayan area ended with an uneasy truce.

Thousands of soldiers backed by armored trucks and artillery have been facing off near the border. Scuffles are not uncommon, but Indian authorities say China upped the ante when its troops breached the line of control.

China accused Indian forces of carrying out “provocative attacks” on its troops. It did not say if any of its soldiers died.

As the countries around the region grapple with the coronavirus pandemic, China has been asserting its territorial claims and influence across the region, notably toward Hong Kong and Taiwan and in the South China Sea.

In South Asia, the sides have been engaged in a “very complex dance” along the line of actual control since early May, said Jeff M. Smith, a research fellow in Heritage’s Asian Studies Center.

That has fanned anti-Chinese sentiments already running high due to Beijing’s opposition to India’s decision in August to revoke the statehood and semi-autonomy of Kashmir, parts of which are claimed by both Pakistan and China, and split it into two territories governed by New Delhi.

Tussles for power between China and India, the first and second-most populous nations, date back centuries, though the two have sought to keep political, economic and security ties and avoid outright bloodshed.

Indian Prime Minister Narendra Modi and Chinese leader Xi Jinping have met more than a dozen times for talks, most recently in October in India, to smooth relations and build up trade. But India's unilateral decision in August to split Kashmir rankled Beijing.

“I think what is interesting is how quickly Sino-Indian relations have deteriorated,” said Joe Fewsmith, a China politics expert at Boston University. “A few years ago, Xi Jinping expressed hope that China and India could build cooperative relations. (That’s) not likely now.”

The pandemic’s origins in the central Chinese city of Wuhan are another factor: With more than 354,000 coronavirus cases and 11,903 deaths India is now the fourth worst affected country in the world.

But the bigger cause for antagonism lies in the Himalayas: a region China has always considered a strategically vital corridor between its restive Muslim Xinjiang region and Tibet.

At the U.N. General Assembly, China has supported Pakistan's opposition to India's decision to split Kashmir into the union territories of Jammu and Kashmir and Ladakh.

The U.S. backed India's assertion of its sovereign right to make such changes within its borders. While troops brawled in eastern Ladakh region in May, President Donald Trump offered to mediate.

The Trump administration has withdrawn U.S. support from Pakistan in favor of India, which it sees as a bulwark against China's growing influence. After two high-profile meetings between Modi and Trump — including rallies in Houston, Texas, and Gujarat, Modi's home state — India agreed to purchase $15 billion in American arms.

The U.S. and India have balked at China's multi-billion-dollar Belt and Road Initiative, a string of infrastructure and finance development projects from the Pacific to the Atlantic Ocean.

In response to the pandemic, a movement has emerged to build up India as an alternative to China for Western markets and to boycott Chinese goods.

Chris Biggers, a former government satellite imagery analyst, said Monday's clash fits a pattern of Chinese “intimidation” along the border. In 2017, similar low-scale hostilities along the tri-border area of Doklam broke out as China pushed into disputed territory, bringing in troops, building roads, expanding airbases, and flying drones and jets.

Yet, the forces amassed at Galwan dwarf what was seen at Doklam.

“I’ve never seen anything, outside of a military exercise, of this kind of mobilization of force, particularly between India and China,” Biggers said.

A further escalation shouldn't be ruled out, said Pravin Sawhney, a military expert and editor of FORCE, a monthly magazine focused on national security.

"They (China) are fully prepared for it. Their belligerence is quite open not only on the border but in the South China Sea, too. On the other hand, India’s response has been very subdued and defensive in nature. There is no immediate threat of an all-out war with China but India should be concerned about an exit strategy and I fear they have none,” he said.

Associated Press writer Sheikh Saaliq in New Delhi and reporters in Beijing contributed to this report.