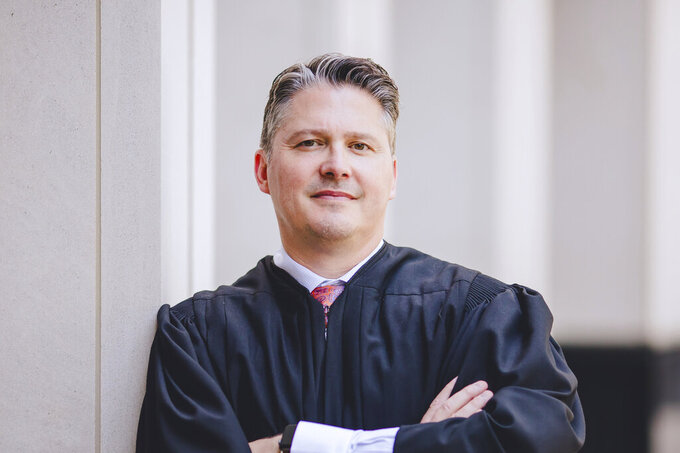 In a provided campaign handout photo, appeals court Judge Brock Swartzle, is shown. Two seats are up for election on the Michigan Supreme Court. If Elizabeth Welch and Chief Justice Bridget McCormack win, Democratic nominees will be in the court's majority for the first time since 2010. The Republican nominees are Swartzle and Mary Kelly. (Chelsea Whitman via AP)

DETROIT (AP) — A decision that torpedoed Gov. Gretchen Whitmer's emergency orders during the coronavirus pandemic has led to calls for political payback in the election for two seats on the Michigan Supreme Court.

The court struck down reams of orders to control the spread of the coronavirus, saying Whitmer acted under a 1945 law that was unconstitutional. The opinion was 4-3, with Republican-nominated justices ruling against the Democratic governor.

If Elizabeth Welch and Chief Justice Bridget McCormack win, Democratic nominees will be in the court’s majority for the first time since 2010. Whitmer is seizing on it by declaring that her effort to save lives was "undermined" by Republican justices, although most major orders, such as masks and crowd restrictions, were quickly rolled out again under different powers.

“I'm hoping they elect McCormack and Welch because we’ve got to have justices who do the right thing and follow the rule of law,” said Whitmer, whose handling of the pandemic has been supported in surveys of Michigan residents.

Supreme Court candidates are nominated by political parties, but they appear on the ballot without a party affiliation. McCormack will have “justice” under her name because she's an incumbent, a significant advantage in a field of seven.

While Whitmer criticizes Republican justices, the court's overall work doesn't appear to bear partisan stripes. McCormack, for example, was unanimously picked by her colleagues to be chief justice. Nearly half of the court's 23 opinions in the 2019-20 term were unanimous.

“I try to ignore the things people in the political branches say about the court. They play a different role,” McCormack said when asked about Whitmer's remarks.

Brock Swartzle, a candidate nominated by the Republican Party, said reaction to the coronavirus decision produced “much partisan heat” but "scant legal light."

“We simply have judges who do their level best to apply the law to the facts,” said Swartzle, an appeals court judge.

The two top finishers get seats. Justice Stephen Markman, author of the opinion that upset Whitmer's orders, is retiring. A look at the major party candidates:

Kelly, 62, of Fort Gratiot was nominated by the GOP. She is a lawyer in private practice but spent 30 years in the St. Clair County prosecutor's office.

“I had a lot of special assignments,” Kelly said. “Back in the '90s, I was asked to start a criminal sexual conduct unit for abused children. I met with the child from beginning to end. I devoted my career to advocating for victims, children, families and business.”

Name recognition in a statewide race is a challenge. Ads promoting Kelly have appeared on cable TV. She also shares a name with two women who were on the Supreme Court: Marilyn Kelly and Mary Beth Kelly.

McCormack, 54, of Ann Arbor is seeking reelection after an eight-year term, including two years as chief justice. She keeps a high profile, co-chairing a commission on reducing jail populations and even running with prisoners to raise money for charity. She has more than 10,000 followers on Twitter.

“It really is a nonpartisan institution," she told Detroit Public TV in 2019. “Part of our message is to convince the public of that even when sometimes the hyperpartisans don't want to believe it.”

COVID-19 forced McCormack to flex the court's authority in overseeing the entire Michigan court system. By September, courts statewide had logged more than 1 million hours of hearings over Zoom, which anyone can watch. MI-Resolve is an online program that allows parties to resolve relatively small disputes with help from a mediator.

“We've seen more change in seven months than in many decades in the courts. That part of the job has been kind of exhilarating,” McCormack said. "Most of what we’re seeing now is not going to go away."

Among her opinions, McCormack in 2018 wrote the 4-3 decision that said public schools can ban visitors from carrying guns.

Swartzle, 49, of Okemos is a judge on the Michigan Court of Appeals. He was appointed in 2017 by Gov. Rick Snyder and elected the next year.

Swartzle said he was inspired to run because Markman, a fellow conservative, was leaving the Supreme Court.

“We need to get someone on the court who has that voice," he said. “In the judiciary, we need to respect what the Legislature does and not ‘fix it’ or infuse our own policy views. We encroach into other branches when we try to do their jobs for them.”

The appeals court assigns cases to three-judge panels. Swartzle has heard appeals over the First Amendment, medical malpractice and criminal convictions. He dissented in a 2-1 decision against a barber who had reopened his shop during the pandemic. But the Supreme Court unanimously ruled in Karl Manke's favor a week later, and Swartzle's work was noted.

Swartzle declined to comment on the decision striking Whitmer's orders because the issue could return to the courts.

Welch, 50, of East Grand Rapids is trying to land on the court from western Michigan. Her campaign is connected to McCormack's reelection bid, with the women appearing together in TV ads and getting a plug in a social media video by the cast of “The West Wing.”

Like Kelly, Welch has never been a judge. Does it matter?

“It's a very good question and one I address frequently,” Welch said. “I practice employment law. I’m mired in COVID (work) right now. I think having a mix of professionals on the court who have different backgrounds — all of those backgrounds add value to the bench.”

Welch has served on her local school board and is former president of the Michigan League of Conservation Voters, an environmental advocacy group.

“I am not a textualist,” she said, referring to a philosophy of looking strictly at a law's text for meaning. “I believe you do have to sometimes look at legislative intent if a law is not clear. The justices have to figure out an answer somehow.”

Welch, too, declined to share her view of the court's opinion on Whitmer's powers.