Deep US cycling team headed to Tokyo with golden ambitions 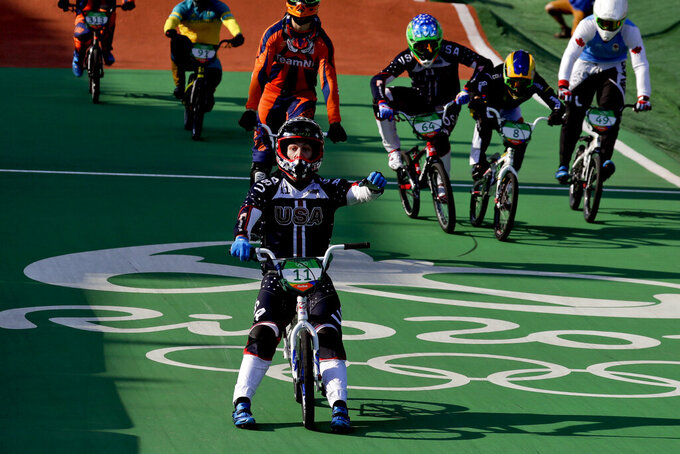 File-This Aug.19, 2016, file photo shows Connor Fields of the United States celebrating after crossing the finish line to win gold in the men's BMX cycling final during the 2016 Summer Olympics in Rio de Janeiro, Brazil. The cycling team that the U.S. is taking to the Tokyo Olympics is a little bit different than the one it would have taken a year ago, when the COVID-19 pandemic forced organizers to postpone the Summer Games by an entire year. In many ways, the team announced Thursday, June 10, 2021, is a whole lot stronger. Fields will try to defend his Olympic title while Corben Sharrah — the 2017 world champ — gives the Americans another medal contender. (AP Photo/Pavel Golovkin, File) 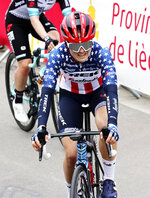 KANSAS CITY, Mo. (AP) — The cycling team that the U.S. is taking to the Tokyo Olympics is a little different from the one it would have taken 12 months ago, when the COVID-19 pandemic forced organizers to postpone the Summer Games by an entire year.

In many ways, it's a whole lot stronger.

Among those on the team announced Thursday are mountain biker Haley Batten, who's been on the podium each of the first two World Cup races of the season; Megan Jastrab, the 19-year-old track cycling prodigy who will be part of the gold medal-favorite women's pursuit team and also contest the Madison; and 23-year-old time trial star Brandon McNulty.

There's a chance none would have made the squad a year ago, yet the extra competition and development gave them the chance to join what could be the deepest American team headed to an Olympics in decades.

“This is a really good team, to be honest,” Jim Miller, the chief of sport performance for USA Cycling, told The Associated Press in a wide-ranging interview. “We've qualified a good number of spots, a good group of athletes competing. I think in most cases the year off was good for us. It gave us a little more time to prepare.”

Miller guided the national team to 14 Olympic medals over a 17-year tenure before departing USA Cycling two years ago to work for a private coaching company. But as part of a massive overhaul under new chief executive Rob DeMartini, he agreed to return last March and guide the American squad in its final preparations for Tokyo.

That four-month sprint to the Summer Games wound up being a year-plus buildup.

“It gave me more time to prepare,” Miller said. “When I came in, I was looking at a few months and we were out of here. We were just going to ‘run what we brung.’ But that extra year gave us additional time to prepare and prep and get some extra projects under our belt and into the teams and everything we were able to accomplish.”

It also allowed riders such as Batten and Jastrab to make sure they would be part of the team.

Batten recently won the short-course race and finished second in the cross-country race at the mountain bike World Cup in Nove Mesto, Czech Republic. That performance followed a third-place finish in the race in Albstadt, Germany.

She'll be joined on the three-member women's mountain bike team by Chloe Woodruff, who finished 14th at the Rio de Janeiro Games, and Kate Courtney, the 2018 world champ whose World Cup overall win two years ago locked in her place on the team.

Christopher Blevins, a former under-23 world silver medalist, will be the lone men's mountain biker.

Jastrab will provide depth for the heavily favored women's pursuit squad, which roared to the 2020 world title with Chloe Dygert, Jennifer Valente, Emma White and Lily Williams — all of whom will ride in Tokyo. Jastrab and Valente will also team up in the Madison, Valente will ride the multi-discipline omnium and Maddie Godby will contest the keirin and sprint.

On the men's side, Gavin Hoover will ride the omnium while teaming with Adrian Hegyvary for the Madison.

Dygert, who was seriously injured during a crash last fall, will be busy during the three weeks in Tokyo. The 2019 world time trial champ will join Amber Neben in the race against the clock, and both of them will join Ruth Winder, Coryn Rivera and Leah Thomas as the Americans try to upset the heavily favored Dutch in the women's road race.

McNulty will join Lawson Craddock in both the men's road race and time trial.

New to the Olympics this year is BMX freestyle, where both the American women and men are ranked No. 1 in the world.

Hannah Roberts was among the first riders to qualify for the Tokyo Games when she won her second world title in three years in 2019. The rider that interrupted her streak? Perris Benegas, who will also compete for the U.S. in Tokyo.

Nick Bruce and Justin Dowell, both among the top five in the world, will represent the men's team.

“We're a strong team,” Miller said, “but the big wild card is we haven't raced. We're not that far away from the fall of ‘21, so for the most part, almost every discipline with the exception of the men’s road, we haven't raced much in two years. So we will have to see, but we think we're taking a really good team to Tokyo.”