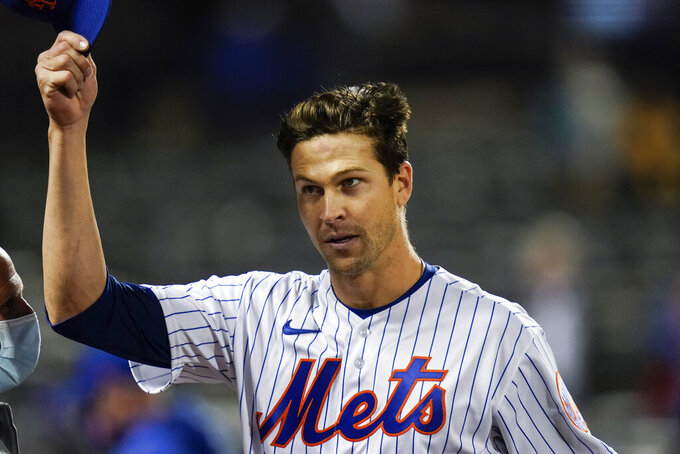 “That made me a little nervous,” he said. “Some of my best starts I’ve barely thrown strikes down there.”

Nothing to be skittish about. He simply pitched the finest game of his eight-year career.

DeGrom struck out a career-high 15, threw a two-hitter and boosted the Mets’ sagging offense with a go-ahead double from the No. 8 spot in the batting order, leading New York over the Washington Nationals 6-0 Friday night.

“You’re going to be replaying that game at the end of 2021 in one of those greatest games of 2021,” said Brandon Nimmo, who hit his first home run of the season and had four RBIs. “He has to be from a different planet because he just does things that seem out of this world.”

DeGrom has 43 strikeouts in his last three outings and 50 this season, breaking the major league record for most in a pitcher’s first four starts set just last weekend by Cleveland ace Shane Bieber with 48.

The two-time Cy Young Award winner walked none and retired the final 19 batters of his second shutout and fourth complete game in 187 starts, just the 16th time since 1901 that a pitcher had 15 or more strikeouts and no walks in a shutout. Starlin Castro singled in the second and Andrew Stevenson doubled in the third.

DeGrom also made the final putout, leaping on first base to catch Pete Alonso’s toss on Josh Harrison’s grounder.

DeGrom smiled and blushed when informed Mets catcher James McCann had told the team's SNY network: “He doesn't just want to beat you, he wants to take your heart and soul in the process.”

“It's part of competing,” deGrom said.

New York stopped a three-game slide after getting to Citi Field at 4:15 a.m. after a Thursday night game at Chicago’s Wrigley Field — deGrom flew home Thursday before his teammates,

He was coming off consecutive 14-strikeout games against Miami and Colorado, and New York gave him a fifth day of rest. DeGrom (2-1) reached double-digit strikeouts for the third time this season and 49th overall. He joined Boston’s Pedro Martínez in 1999 and Houston’s Gerrit Cole in 2019 as the only pitchers to strike out 14 in three straight appearances.

Taking the mound to Lynard Skynyrd’s “Simple Man,” deGrom was anything but.

He topped out at 101 mph and reached 100 mph on 10 pitches, five in the first inning. Since the start of the 2020 season, deGrom has reached triple figures on 33 first-inning pitches; Miami’s Sixto Sánchez is a distant second with eight, according to MLB Statcast.

DeGrom threw 84 of 109 pitches for strikes, mixing 56 fastballs with 46 sliders at about 92 mph and seven changeups of 91-92 mph. He got seven strikeouts on sliders, and four on each of his other two pitches.

"It was one of those days where he was on," Nationals manager Dave Martinez said,

DeGrom struck out the side in the sixth and seventh innings and dropped his season ERA to 0.31 with one earned run allowed. The pandemic-limited crowd of 8,130 repeatedly chanted “M-V-P!”

He knew his previous strikeout high was 14.

“When I looked up there and I saw 12, I was like, OK, you've got to figure out a way to strike out three guys,” deGrom said.

Erick Fedde (1-2) allowed three runs and four hits in five innings. He hit J.D. Davis on the back of his left leg with a one-out pitch in the fifth. Jeff McNeil worked a nine-pitch walk and deGrom lined a belt-high sinker to the opposite field into left, giving him a five-game hitting streak dating to 2019.

“I get paid to hit the ball and this guy, he gets paid to throw the ball and he hits it better than all of us,” Nimmo said with overstatement.

Back in the lineup after missing two starts with a sore right hip, Nimmo ended an 0-for-8 slide by grounding a two-run single past first baseman Josh Bell for a 3-0 lead in the fifth and added a two-run homer in the eighth off Kyle McGowin. Dominic Smith had an RBI single off Austin Voth in the seventh.

Long after the final out, Nimmo was marveling about deGrom.

“He single-handedly won and changed the game,” Nimmo said.

With two off days next week, the Mets optioned No. 5 starter Joey Lucchesi to their alternate training site and recalled LHP Stephen Tarpley.

Washington RHP Max Scherzer will start Tuesday against the Blue Jays in Dunedin, Florida, as the Nationals temporarily go with a four-man rotation.

Martinez choked up and fought back tears near the end of what had been a routine pregame availability.

“I want to just go out there and honestly just give my condolences to all the people that lost family members and friends throughout this pandemic,” he said, putting a hand over his heart. “I went down — I’m riding the bus and I saw a big cemetery that had family, and to see all those stones is something else.”

Nationals: LHP Jon Lester (recovering from COVID-19) is scheduled to throw six innings and up to 90 pitches in a simulated game Sunday, and the Nationals will decide Monday whether he is ready to be activated for his Washington debut.

Mets: RHP Carlos Carrasco (elbow soreness) is scheduled for a rehab outing Saturday at Port St. Lucie, Florida. ... RHP Seth Lugo (elbow surgery Feb. 16) has thrown off a mound but has not faced hitters. He is expected back next month.