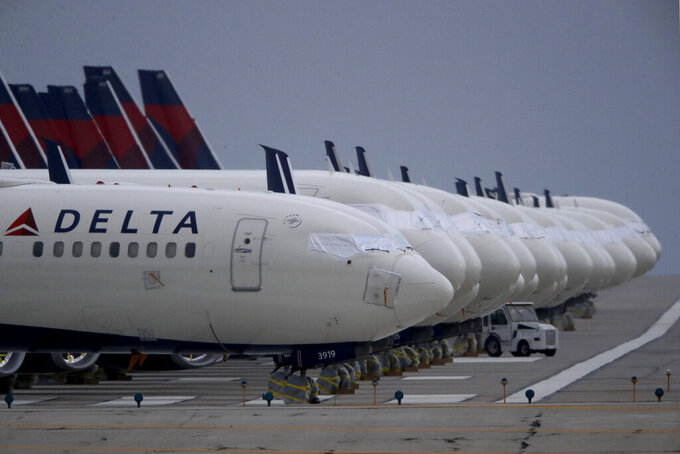 FILE - In this May 14, 2020 file photo, several dozen mothballed Delta Air Lines jets are parked on a closed runway at Kansas City International Airport in Kansas City, Mo. Delta Air Lines is the first carrier to report financial results for the third quarter, and the numbers are grim. Delta said Tuesday, Oct. 13 that it lost nearly $6.9 billion as travel remain depressed over the normally peak vacation season because of the pandemic. (AP Photo/Charlie Riedel, File)

The summer travel season was even worse than expected for Delta Air Lines, which said Tuesday that it lost $5.4 billion in the third quarter as people hunkered down at home during the pandemic.

Delta officials pushed back their timetable for breaking even, from year-end to next spring, as their previous expectation that COVID-19 would be contained proved too rosy. The airline's shares fell almost 3% on Tuesday.

However, Delta's executives said passengers are starting to return and bookings for Thanksgiving and Christmas are looking up.

“It's slow, but it's steady — week by week, they are coming back,” CEO Ed Bastian said of passengers.

Bastian said Delta plans to stop blocking middle seats in the first half of next year. That would reverse a policy that Delta has used to distinguish itself during the pandemic from its closest peers, American Airlines and United Airlines, who do not block seats.

The number of people screened at U.S. airports is down 65% this month, compared with last October, but that's better than the 68% decline in September, the 71% drop in August and the 96% plunge in mid-April.

Most of the people flying now are low-fare leisure travelers. Bastian said business travel is down 85% but that most corporate customers are putting at least a few employees back in the air.

Bastian said video technology might replace some trips, and there could be a 10% to 20% drop "in the next couple of years when we get to that new normal of business travel.” Some analysts found that troubling.

“Business travel was 50% of their revenue at one point,” said Peter McNally, an analyst at Third Bridge Group in New York. “It’s a market that Delta has made the core of their business, so they will be forced to compete harder on the leisure side of the market to make up for that loss.”

Atlanta-based Delta's loss compared with a year-ago profit of $1.5 billion and nearly matched the loss of $5.7 billion in the second quarter, when the pandemic brought air travel to a near standstill. Since then, Delta has concentrated on hoarding cash — it raised $9 billion by mortgaging its frequent-flyer program — and cutting costs.

Delta reduced its cash-burn rate to $18.4 million a day in September from $26.1 million in July and August, and Bastian predicted it could reach break-even cash flow by spring. Investors are watching cash as a gauge for how long carriers can last in the industry’s current depressed state.

Cowen airline analyst Helane Becker said she was not surprised that Delta said it would take more time than expected to hit break-even.

“Air travel demand has been improving, but the pace of the recovery has been slower than what the market wants to hear,” she said.

The slower cash burn comes with a human price: It is possible in part because 18,000 employees took buyouts or early retirement and thousands more have taken unpaid leave. Executives said 40,000 took leave during the summer; 12,000 were on leave in September. Delta had 91,000 employees in January.

The large number of voluntary departures has let Delta avoid layoffs, in sharp contrast to American, which furloughed 19,000 employees this month, and United, which cut 13,000.

Delta could still furlough 1,700 pilots next month unless the union agrees to contract concessions or Congress and the White House provide more aid for the airline industry.

“We haven’t needed to furlough — our employees took care of that themselves,” Bastian said in an interview. “They didn’t rely on the government relief to take of saving their jobs. They saved each other’s jobs.”

Back in April, airlines reached agreements with the Treasury Department for up to $25 billion in payroll relief, with Delta getting $5.4 billion. On Tuesday, Delta listed a $1.3 billion gain in federal payroll support, which a company spokesman said represented an additional payment by the Treasury Department. The money — and an accompanying ban on layoffs — expired this month. The industry and its unions are seeking another $25 billion.

Those amounts don’t represent Delta’s full dependence on government funding to get through the pandemic.

Delta employees say the company helped them apply for taxpayer-funded unemployment benefits if they took a voluntary leave of absence. In one such message, Delta suggests that employees stress on applications that they took a leave “in direct response to Delta’s urgent need to cut payroll costs” because of the pandemic and government travel restrictions.

Most of Delta's third-quarter loss stemmed from the cost of paying people to quit and writing down the value of assets including planes destined for resale or the scrap yard. The rest was linked to a 76% plunge in revenue.

The company reported a pretax loss of $2.6 billion, excluding charges for employee severance and asset write-downs and a gain from the federal payroll grant. The adjusted loss of $3.30 per share compared with an average forecast of $3 per share among 18 analysts surveyed by FactSet.

Revenue plummeted to $3.06 billion, less than the $3.13 billion estimated by analysts. Passenger revenue, which excludes cargo and the Delta-owned refinery, dropped 83% from a year earlier — an improvement from the 94% plunge in the second quarter.

“We are seeing good booking momentum into Thanksgiving and Christmas and really even into the off-peak periods in December and into early January,” said airline President Glen Hauenstein. He did not give figures.

Delta is the first U.S. airline to release third-quarter numbers. United Airlines is scheduled to release its results Wednesday, and analysts expect another large loss.