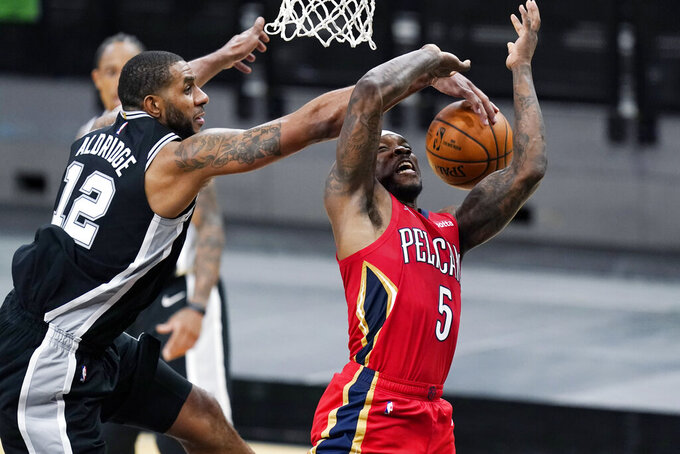 SAN ANTONIO (AP) — DeMar DeRozan returned to the court Saturday night and it was exactly what San Antonio’s veteran guard needed after a chaotic and sorrowful two weeks.

DeRozan had 32 points and 11 assists and the short-handed Spurs held on to beat the New Orleans Pelicans 117-114.

“All I cared about was making you proud,” wrote DeRozan, who was not available following the game. “Over the past three years I seen you display the ultimate measure of a man fighting to the end. Wish I could tell you thank you one last time.”

DeRozan responded with his fifth game of least 25 points and 10 assists since joining San Antonio in 2018. He had only one turnover in 36 minutes against New Orleans.

“It just showed he’s a real professional, real vet,” said Spurs guard Dejounte Murray, who had 18 points. “This is his happy place, because what he was going through, I can only imagine. I talked to him the whole time he was gone, letting him know I’m here for him, the team’s here for him. We’re brothers.”

Brandon Ingram had 29 points and Zion Williamson added 23 points and 14 rebounds for New Orleans. The Pelicans have lost two straight and seven of 10.

DeRozan’s return was a needed boost for the Spurs, who played their first home game since Feb. 9 before embarking on what was supposed to be seven-game trip. San Antonio’s annual month-long excursion was shortened when the team had to postpone four games after multiple players contracted COVID-19 or encountered someone with the virus.

The Spurs leaned on DeRozan with two starters and two key reserves sidelined. The 12-year veteran had his fifth 30-point game and third in his last seven outings.

“To be gone that long and not show any rust and be able to have wind and play as much as he did and as hard as he did ... he was special,” San Antonio coach Popovich said.

LaMarcus Aldridge added 21 points off the bench in his second game back after missing six games because of a sore right hip.

“We were a little bit better (defensively) down the stretch, but today we couldn’t make shots and our defense isn’t good enough over the course of the game to win for us,” New Orleans coach Stan Van Gundy said.

“We are totally dependent on our offense to win games and you’re not going to go far with that.”

Pelicans: G JJ Redick missed the game with right hamstring tightness. Redick had nine points and seven rebounds in 26 minutes in Thursday’s 129-125 loss to Milwaukee. It is the first game Redick has missed due to injury, but he did not play in three games due to coach’s decision. … Adams played in his second consecutive game after missing two games with an ankle injury. He averaged 10.5 points and 10.5 rebounds in those two games.

Spurs: Popovich said he is unsure when the five players sidelined by COVID-19 protocols will return, but he expects it to be a slow process. “They’re not all going to come back at the same time,” Popovich said. “Some may be back before the break, maybe some of them won’t, I just don’t know. But we won’t have a whole group before the break, for sure.” ... Lonnie Walker IV had 17 points and set a career high this season with 44 3-pointers in 27 games. He had 41 3-pointers in 61 games last season. … The Spurs have used seven starting lineups this season, including a change to their starting unit in each of their past two games.