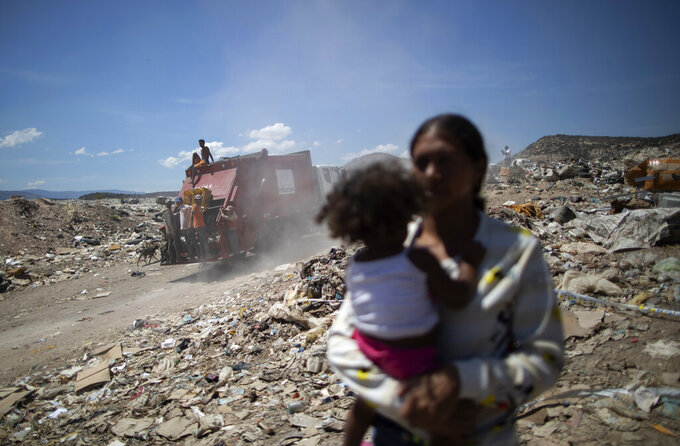 FILE - In this March 3, 2021 file photo, youths who cull through trash for items to resell ride on the back of a garbage truck entering the Pavia landfill on the outskirts of Barquisimeto, Venezuela. A U.S. senator urged the Biden administration Tuesday, March 23, 2021, to lift a ban on diesel fuel swaps with Venezuela, adding to pressure from some Democrats and aid workers who argue sanctions are worsening the South American country's dire humanitarian crisis. (AP Photo/Ariana Cubillos, File)

MIAMI (AP) — A U.S. senator urged the Biden administration Tuesday to lift a ban on diesel fuel swaps with Venezuela, adding to pressure from some Democrats and aid workers who argue sanctions are worsening the South American country's dire humanitarian crisis.

The Trump administration in November barred non-U.S. companies from sending diesel to Venezuela in exchange for the country’s crude oil. Previously, such swaps had been exempted from U.S. sanctions aimed at ousting President Nicolás Maduro because of the critical role diesel plays in public transport and helping farmers move food supplies to market in diesel-powered trucks.

Sen. Chris Murphy of Connecticut, a Democratic member of the Senate Foreign Relations Committee, sent a letter to Secretary of State Antony Blinken calling for the U.S. to end what he called the “misguided” policy. He said that immediately restoring diesel swaps would “provide lifesaving relief for millions of Venezuelans” as current diesel reserves are expected to run critically low by April.

The ban “has created no real political leverage with Maduro, who was able to maneuver around the unilateral sanctions, and instead threatens to severely worsen the already dire humanitarian situation in the country,” Murphy wrote in the letter, a copy of which was provided to The Associated Press.

Murphy’s request comes as the Biden administration reviews U.S. policy toward Venezuela with the goal of building a multilateral front against Maduro and ensuring humanitarian aid gets to Venezuelans in need. It also would seem to reinforce tentative steps by Maduro and the U.S.-backed opposition to work together to jointly address Venezuela's crisis, beginning with a deal to import badly needed coronavirus vaccines.

It’s an approach favored by many in the Democratic party as well as aid workers in Venezuela, Wall Street bondholders and foreign oil companies that are seeking a recalibration of U.S. sanctions policy.

Last fall, a group of 115 organizations and individuals in the U.S. and Venezuela wrote then Secretary of State Mike Pompeo warning of “devastating consequences” for regular Venezuelans as a result of the diesel ban. Spain's Repsol SA and Italy's Eni SpA, both of which carried out swaps with Venezuela's state-owned oil company, have also recently lobbied members of Congress on Venezuelan sanctions, lobbying disclosure forms show.

Neither the Biden administration nor opposition leader Juan Guaidó, who the U.S. recognizes as Venezuela’s rightful leader, have said whether they support lifting the diesel ban.

U.S. officials have insisted that current sanctions allow for the delivery of humanitarian goods, though many observers say there is a risk of overcompliance by companies and organizations fearful of doing business with Maduro’s government.

Guaidó and his allies blame Maduro’s mismanagement of the oil-based economy for the fuel shortages, pointing out that his government, despite mounting hunger, continues to ship thousands of barrels of diesel daily to leftist ally Cuba.

“They try to portray this as a humanitarian situation but they’re stockpiling the diesel for the army and giving it to Cuba while the people suffer,” Juan Gonzalez, the National Security Council’s senior director for the Western Hemisphere, said in an interview this month with Miami-based Spanish-language broadcaster EVTV. “We understand very well what’s happening.”

About 4% of total diesel supplies in Venezuela were shipped to Cuba since January 2020, all of it domestically produced and of a poorer quality than the imported fuel, according to consultancy Gas Energy Latin America.

Murphy has emerged as a Democrat more willing to question the effectiveness of sanctions than close Biden ally Sen. Bob Menendez, the chairman of the Senate Foreign Relations Committee.

Feliciano Reyna, head of the Caracas-based aid group Accion Solidaria, which focuses on HIV/AIDS treatment and medical relief activities, said lifting the ban would hopefully unfreeze relations between the Maduro government and the opposition.

In recent days, the two sides overcame a months-long impasse to reach an agreement to purchase 12 million coronavirus vaccines through the World Health Organization. As part of the deal, the opposition will ask the Biden administration to release up to $30 million in funds frozen by sanctions in U.S. bank accounts to pay for the vaccines. In turn, Maduro must commit to distributing the vaccines without any political interference.

Reyna said he hopes that lifting the diesel ban would eventually lead Maduro to yield on another key demand of aid groups: that the Rome-based World Food Program be allowed to operate in Venezuela.

“This would be a very strong sign from Biden that he’s thinking first of the Venezuelan people,” said Reyna, who testified about the fuel swaps this month before the House Foreign Affairs Committee.