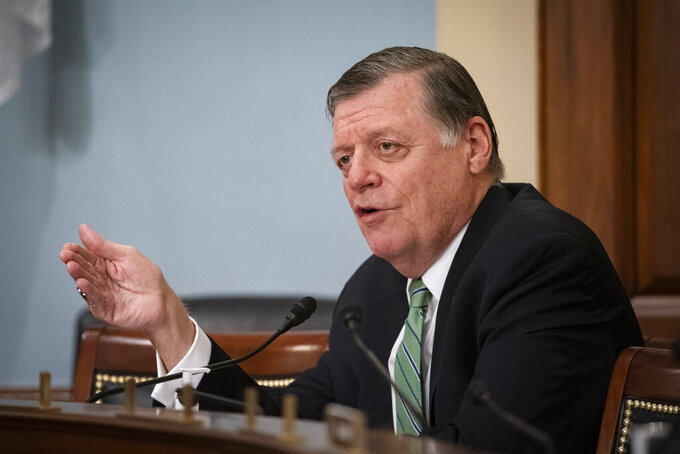 FILE - In this June 4, 2020, file photo, Rep. Tom Cole, R-Okla., speaks during a hearing on Capitol Hill in Washington. A dirty word for many Republicans is making the rounds on Capitol Hill -- earmarks. For nearly a decade, both chambers of Congress have abided by a ban on earmarks, or spending requested by a lawmaker to fund a specific project or institution back home. But Democrats are moving to bring back the practice, leaving the GOP lawmakers divided over how to respond.(Al Drago/Pool via AP, File)

WASHINGTON (AP) — Can lawmakers bring home the bacon without it being pork?

It's a question that's vexing Republicans as they consider whether to join a Democratic push to revive earmarks, the much-maligned practice where lawmakers direct federal spending to a specific project or institution back home. Examples include a new bridge, community library or university research program.

Earmarking was linked to corruption in the 2000s, leading to an outcry and their banishment in both the House and Senate. But many in Congress say the ban has gone too far, ceding the “power of the purse” to party leaders and the executive branch and giving lawmakers less incentive to work with members of the other party on major legislation.

Democratic appropriators in the House see a solution and are proposing a revamped process allowing lawmakers to submit public requests for “community project funding” in federal spending bills. To guard against graft, the process includes safeguards to prevent conflicts of interest.

Whether earmarking becomes bipartisan could have enormous implications not only for the allocation of spending across the country, but for President Joe Biden, who is gearing up for a massive infrastructure push that he hopes will attract significant Republican support. With earmarking in place, bipartisanship could prove easier to achieve, as lawmakers on both sides of the aisle could have reason to support bills they would otherwise oppose.

“This is a matter of allowing members to serve their own constituents,” said Rep. Tom Cole, R-Okla. “Somebody is going to be making these decisions — and I don’t want to bash federal bureaucrats — but somebody who has never been to my district probably doesn’t know the needs as well as I do.”

With Congress having allocated nearly $6 trillion responding to the COVID-19 pandemic, some conservatives are aghast at the prospect of Republicans participating in a Democratic spending spree. They say their party should resist earmarking, not revive it.

"This is not the time to fall into the swamp, or into the dark hole of earmarks," said Rep. Ted Budd, R-N.C. “We've got to draw a bright line between Republicans and Democrats right now."

For now, the debate over earmarks is taking place mostly behind the scenes, with House Republican leadership holding a listening session on the issue Monday night.

“It really feels like a jump ball,” Budd said. “Some are adamantly opposed, as am I. The older members who have been here a lot longer, they tend to be for it.”

Worried about what's ahead, Republican members in both chambers of Congress have sponsored legislation this year to prohibit earmarks. Eleven Republicans have added their name to a bill sponsored by Sen. Steve Daines, R-Mont., and 10 Republicans have signed onto a House version from Rep. Ralph Norman, R-S.C.

About three dozen lawmakers also signed onto a letter Wednesday urging the leaders of the Appropriations committees in both chambers to avoid a return to earmarking. Budd spearheaded the effort and said he's telling groups outside the Beltway and inside to contact their members and let them know “how precarious this is.”

The end of earmarking came swiftly a decade ago, when House Republicans took the majority and quickly banned the practice. President Barack Obama pledged during a State of the Union address that “if a bill comes to my desk with earmarks inside, I will veto it.” The Senate Appropriations Committee soon followed up with a moratorium of its own.

It was a popular move after headlines focusing the nation’s attention on Alaska’s $223 million “bridge to nowhere” and Rep. Randy “Duke” Cunningham’s guilty plea to accepting bribes from companies in exchange for steering government contracts their way. President Donald Trump pardoned the eight-term GOP congressman earlier this year as he was exiting the White House.

Over the years, the moratorium has been enforced by party rules and committee protocols. It does not exist in House or Senate rules, or by force of law.

In late February, as Chairwoman Rosa DeLauro, D-Conn., took charge of the powerful Appropriations Committee, she said it was time for a change. Done properly, she and other Democrats say a defined process for funding requests can make lawmakers more responsive to their constituents.

She has spelled out several requirements that must be met for lawmakers to request funding, including;

— All requests must be made online.

— Members must certify that they and their family have no financial interest in the projects they request.

— Members may request funding for state or local government grantees and for nonprofits, but not to help for-profit corporations. A maximum of 10 requests will be considered per member.

— The overall amount of spending on projects must not exceed 1% of discretionary spending. Such spending doesn’t include entitlement programs such as Medicare and Social Security, or the cost of financing the federal debt.

“As long as they’re transparent and I have to put my name by them that I requested this stuff,” Simpson said. “I’m not gonna be asking for anything that’s stupid, that people are going to beat me up on. I’m going to say the city of Boise requested this stuff because they needed help in this area.”

Rep. Peter DeFazio, the chairman of the House Transportation Committee, also announced he would allow earmarks in the next roads and transit infrastructure bill being drawn up in the committee. He said requests should include, among other things, letters of support, sources of funding for the full cost of the project, the status of the project, and a description of opportunities for the public to comment.

The ranking Republican on the committee, Rep. Sam Graves of Missouri, said earmarks would not increase the amount of money spent in a bill. They just spend that money differently.

“It just changes who makes the decision. And when you have bureaucrats who are not elected and don’t have to withstand scrutiny for their decisions, then you don’t have any accountability on how those dollars are spent,” Graves said. “That’s something I feel pretty strongly about.”

Norman worries that earmarks would be used to entice Republicans to vote for bills with expensive price tags.

“In your family budget you have priorities,” Norman said. “And the priority of this country today is to get on a firm financial basis. Will earmarks do that? I would make the argument they will not.”

The Senate appears less further along in its earmark planning, but Sen. Patrick Leahy, D-Vt., said Wednesday he expects to allow lawmakers to request what he called “designated spending.”

“I’m perfectly willing to divide it equally between Republicans and Democrats. And so it will be up to them if they want it. If they don’t, we’ll just have it on the Democratic side,” Leahy said.