Democrats, $200K consultant agree on map; not most others 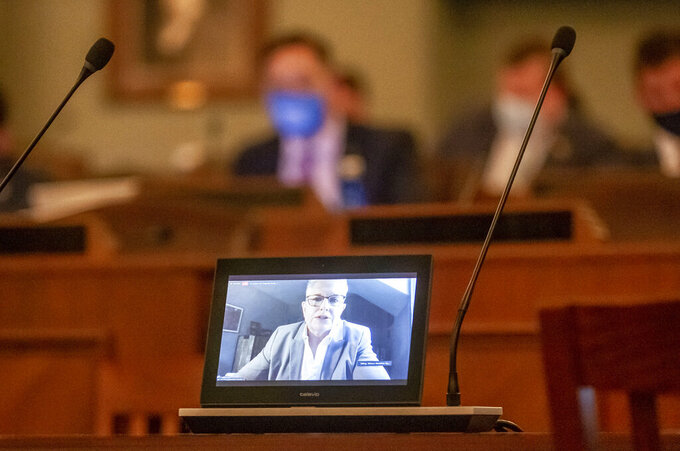 Madeleine Doubek, the Executive Director of Change Illinois, delivers her remarks virtually on the proposed boundaries for new state legislative districts during a public hearing with the House and Senate redistricting committees at the Illinois State Capitol in Springfield, Ill., Tuesday, May 25, 2021. (Justin L. Fowler/The State Journal-Register via AP)

SPRINGFIELD, Ill. (AP) — Illinois Democrats are pushing to redraw legislative district maps required each decade despite not having the latest Census data and a public hearing in which the only witness to agree with their approach was their $200,000 consultant.

Democrats say that the remap of House and Senate districts governing Illinois General Assembly elections for the next decade has been an open process involving input garnered from four dozen public hearings. But Republicans complain they've been shut out. Critics want lawmakers to wait for 2020 Census numbers which have been delayed until late summer by the COVID-19 pandemic. And they're angry at Democratic Gov. J.B. Pritzker for backing away from a campaign pledge to veto any map drawn by politicians.

But at a hearing this week, renowed social scientist Allan Lichtman of American University defended the Democrats' approach and their use of less-precise data from the Census' American Community Survey while acknowledging that he did not participate in the map-making.

Lichtman, who helped Democrats in the remaps of 2000 and 2010, is under contract with both the House and Senate Democrats for $100,000 apiece from February through June, according to state records.

“In terms of providing minority representation in the General Assembly, the state of Illinois is an exemplar. It’s a model for the nation,” Lichtman said. “About a third of the members of the state House and the state Senate are African Americans, Asian Americans, or Hispanics. That’s right in line with the minority, citizen voting age population in the state.”

His testimony came in the first of ongoing hearings on the map after Democrats last Friday night popped out computerized, unlabeled drafts of House and Senate lines without detail or explanation. It was a surprise in this map construction, the first in decades not under the thumb of former Democratic House Speaker Michael Madigan, who resigned in February.

Political lines must be redrawn after each decennial Census to reflect changes in population and ensure protection of voters’ rights. They must be compact, contiguous, and of equal population, among other things. After the state spent millions of dollars to promote an accurate 2020 Census count, critics have argued that the maps should be based on those numbers, which the COVID-19 pandemic has delayed until August.

Interest groups testifying Tuesday complained they didn't have enough information — “We're looking at shapes on a map,” Senate Republican Leader Dan McConchie lamented — to comment on whether the newly drawn districts are fair and agreeable.

“We need to see exactly how many people from each demographic — ages, races, so on — are in each of these districts so that we can do our own fact-checking,” said Grace Chan McKibben, executive director of the Coalition for a Better Chinese American Community.

But Chicago Democratic Rep. Elizabeth “Lisa” Hernandez, the House Redistricting Committee chairwoman, repeatedly refused to commit to a release date for the base data and incomplete.

“After these hearings are concluded, and any resulting changes to the proposal are finalized, we plan to provide further information about the population demographics and communities that comprise the final districts in the form of a descriptive resolution,” Hernandez said.

Democrats likely will vote on final lines before Monday's scheduled adjournment of the General Assembly's spring session. They say they’re in a hurry because the state constitution sets June 30 as a map deadline. But that's a deadline only for Democrats to produce a map without Republican interference. After that date, the cartography moves to a bipartisan, eight-member commission which Democrats have labeled “political insiders” and Republicans say is the kind of independent commission many politicians say they prefer. When that commission inevitably deadlocks, the name and party of a tie-breaking ninth member is chosen from a hat. The final deadline is not until Oct. 5.

Pritzker has also staked out June 30 as the deadline. He's been castigated because as a candidate in 2018, he called for an independent commission to draw the lines and promised he would nix a map created by politicians. He's blamed his change of heart partly on the fact no commission has materialized. Last week he reiterated, “I’ll veto an unfair map, that's for sure.”