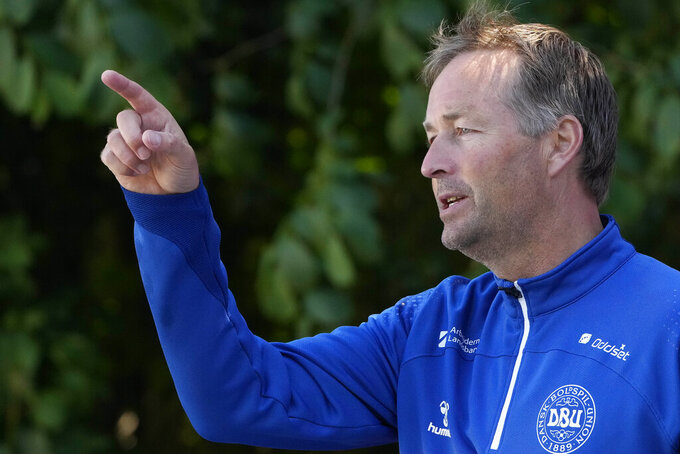 Denmark's manager Kasper Hjulmand talks to the media prior a training session of Denmark's national team in Helsingor, Denmark, Tuesday, June 15, 2021. It is the second training of the Danish team since the Euro championship soccer match against Finland when Christian Eriksen collapsed last Saturday. (AP Photo/Martin Meissner)

COPENHAGEN (AP) — Denmark coach Kasper Hjulmand stepped up his criticism of UEFA on Tuesday for not giving his players the option to postpone the game against Finland in the wake of Christian Eriksen’s collapse.

Hjulmand said UEFA failed to “lead with compassion” and that his players were put “in a hugely difficult situation” after the incident on Saturday at the European Championship.

The Euro 2020 game resumed following a suspension of about 90 minutes after Eriksen suffered cardiac arrest and had to be resuscitated with a defibrillator.

Denmark was given the option by UEFA to either resume that evening or come back at noon on Sunday. That has led to widespread anger in Denmark and a spat between the team and UEFA about whether the players were pressured into coming back onto the field so soon.

Hjulmand pointed out that newly created coronavirus protocols for Euro 2020 allow UEFA to postpone a game for 48 hours if a certain number of players from one team test positive or have to self isolate.

”The only real leadership would have been to put the players on a bus and send them home. And then deal with it after,” Hjulmand said. ”With corona cases it’s possible to postpone a game for 48 hours. But with cardiac arrest, apparently it’s not. And I think that’s wrong. You don’t necessarily find good leadership in the protocols. Good leadership can sometimes be to lead with compassion.”

UEFA on Monday defended its handling of the situation and has repeatedly said it wasn’t possible to postpone the game for longer because Finland is due to play its second group game on Wednesday in St. Petersburg, Russia. Denmark plays Belgium in Group B in Copenhagen on Thursday.

Finland scored after the resumption and won 1-0. Had Denmark refused to play, it would have risked being handed a 3-0 forfeit loss.

“UEFA is sure it treated the matter with utmost respect for the sensitive situation and for the players,” the governing body of European soccer said. “It was decided to restart the match only after the two teams requested to finish the game on the same evening.”

However, the insistence from UEFA that it was the Denmark players who requested the resumption on Saturday has rankled both Hjulmand and his players. They insist that it would have been worse to come back Sunday after a sleepless night and that they should have been given a third option.

“It's completely wrong to give the perception that it was we who came and said we wanted to continue playing as our first option. It was a choice between the two scenarios,” Hjulmand said. ”And then you can argue whether we were put under pressure. I felt that the players — and us close to them — were put under that pressure and were given that dilemma. It was a hugely difficult situation to be in.”

Eriksen remains in the hospital and sent his first public message via social media on Tuesday, thanking supporters from around the world for their well-wishes.

Denmark forward Martin Braithwaite said Monday that he and his teammates would have preferred a longer postponement.

”It was not our wish to play,” Braithwaite said. “But we were told we had to make a decision. ... There were many players who weren’t in a condition to play the match. We were in a completely different place.”

Hjulmand said he’s not expecting any kind of compensation from UEFA but is hoping that the governing body learns from the incident.

“Looking back, I don’t feel right that we were there (back on the field) after the incident,” Hjulmand said. “I think it showed so much strength from the guys, to be able to go out and play. That shows so much character, so much strength, and I’m very proud of that.

"Having said that, I don’t think it was the right thing to be given those two choices, play now or tomorrow at 12. … And maybe that’s a learning lesson for the future.”