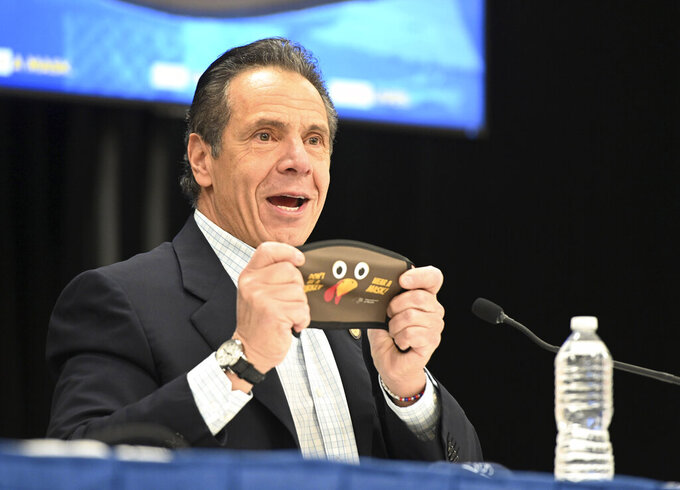 In this provided by the State of New York, New York Gov. Andrew Cuomo holds up a new Thanksgiving-themed face mask during his daily coronavirus briefing at the Wyandanch-Wheatley Heights Ambulance Corp. Headquarters in Wyandanch, N.Y. After disclosing that he will no longer be celebrating Thanksgiving with his 89-year-old mother in-person, Cuomo asked New Yorkers to abandon plans for in-person Thanksgiving festivities. (Kevin P. Coughlin/State of New York via AP)

BOSTON (AP) — Massachusetts Gov. Charlie Baker and New York Gov. Andrew Cuomo — both praised and reviled for their coronavirus wins and missteps — were honored for their pandemic leadership at a virtual event Wednesday evening.

Baker, a Republican, and Cuomo, a Democrat, have led states that were among the hardest-hit places during the first wave of infections last spring. The Edward M. Kennedy Institute credited Cuomo and Baker with taking actions that helped slow the spread of the disease, including pushing people to wear masks in public and take other precautions.

The institute, naming both governors as recipients of its Award for Inspired Leadership, also praised them for actions beyond their handling of the pandemic. It pointed to efforts by Baker to use public-private partnerships to spur economic development, overhaul the state’s regulatory environment and deliver tax relief by doubling the Earned Income Tax Credit.

It also noted Baker’s efforts to invest in K-12 education, combat the opioid crisis and expand the state’s reliance on renewable energy.

Baker said during the award ceremony that he understands how difficult the pandemic has been. Baker said he used to have a meal every week with his elderly father. That stopped when the virus took hold and Baker stopped visiting for months.

“I didn’t see him for 100 days and I still haven’t had a meal with him,” Baker said. “For me and for so many others, this is a nightmare.”

He said the coronavirus has also taken an economic toll, pointing out that he hasn’t permitted bars to open since March.

“This virus just punches me in the gut every day,” he said.

Baker has come under criticism for his handling of a second surge of the coronavirus in Massachusetts, particularly his decision to allow restaurants to continue to allow indoor dining, which he didn't allow during the initial surge. Baker has said that restaurants have taken precautions, and this week he announced that their capacity limit would be reduced from 50% to 40% as of Sunday.

The institute praised Cuomo, who first took office on January 2011, for fighting “for social, racial and economic justice for all New Yorkers.”

Victoria Reggie Kennedy, the widow of Edward Kennedy, said Cuomo showed leadership during the early days of the pandemic when thousands were dying in New York.

Cuomo said the test of leadership is telling people what they don’t want to hear — including the need for social distancing from those not in their immediate household.

Cuomo said he’s hoping not to have to reimpose the harsh measures to control the pandemic, but doesn’t want to overwhelm hospital capacity.

“If you get near that point you have to shut down,” he said.

Cuomo has been faulted for not acting sooner to shut down New York City during the early days of the pandemic and for waiting too long to require New Yorkers to wear masks. He's also been criticized for a March 25 order that sent thousands of recovering COVID-19 patients from hospitals into nursing homes.