Despite federal ban, renters still being evicted amid virus 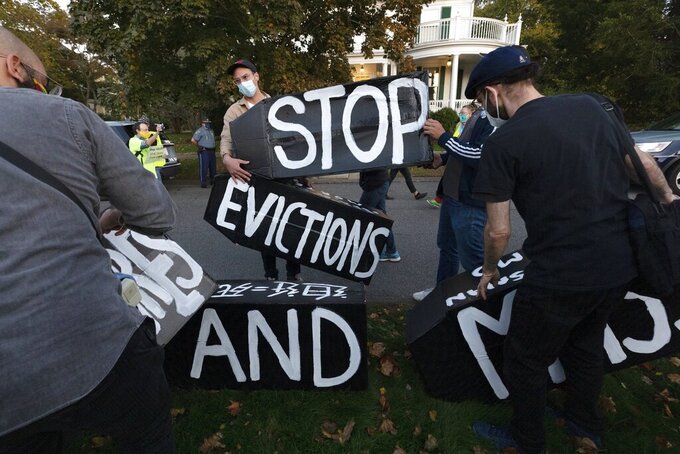 FILE - Housing activists erect a sign in front of Massachusetts Gov. Charlie Baker's house, Wednesday, Oct. 14, 2020, in Swampscott, Mass. Renters are still being evicted during the coronavirus pandemic despite a federal order that is supposed to keep them in their homes. The nationwide eviction ban went into effect Sept. 4 and was supposed to replace many state and local bans that had expired. But tenant advocates said there are still people unaware of the directive implemented by the Centers for Disease Control and Prevention that broadly prevents evictions for nonpayment of rent through the end of 2020. (AP Photo/Michael Dwyer, file)

BOSTON (AP) — A nationwide eviction ban was supposed to protect tenants like Tawanda Mormon, who was forced out of her two-bedroom apartment last month in Cleveland.

The 46-year-old, who was hospitalized in August for the coronavirus and can't work due to mental health issues, said she fell behind on her $500-a-month rent because she needed the money to pay for food. When she was evicted in October, Mormon said she was unaware of President Donald Trump’s directive, implemented in September by the Centers for Disease Control and Prevention, that broadly prevents evictions through the end of 2020.

"It was difficult. I had to leave all my stuff,” said Mormon, who has been staying with friends and relatives since her eviction. “I don’t have no furniture, no nothing.”

With most state and local eviction bans expired, the nationwide directive was seen as the best hope to prevent more than 23 million renters from being evicted amid a stalemate in Congress over tens of billions of dollars in rental assistance. It was also billed as a way to fight the coronavirus, with studies showing evictions can spread the virus and lead to an increase in infections.

The CDC order has averted a wave of evictions, housing advocates said, but tenants are increasingly falling through the cracks.

Some judges in North Carolina and Missouri refused to accept the directive, tenant advocates said. The order has been applied inconsistently, and some tenants, who had no legal representation, knew nothing about it. Landlords in several states also unsuccessfully sued to scrap the order, arguing it was causing them financial hardship and infringing on their property rights.

“Right now, we are seeing variations in the way courts are applying the CDC order, and we are also seeing a lack of knowledge among tenants and property owners,” said Emily Benfer, a law professor at Wake Forest University and the chair of the American Bar Association's COVID-19 task force committee on evictions. “Advocates are working overtime to inform tenants of their rights under the CDC order and, in many places, evictions are going forward.”

In Fremont, Nebraska, Dana Imus went to court this month to avoid getting evicted for falling behind on rent. The 41-year-old mother of four lost her job as a forklift operator in March due to the pandemic and hasn't been able to get another one — partly due to her car breaking down.

When she presented a declaration to her landlord that she qualified for the federal moratorium, she said he told her wrongly that Nebraska didn't recognize it. She also tried to pay her landlord $400 of the $1,000 rent for October, but he refused. She used the money, instead, for a car payment and now has no money for rent.

“It's been a struggle," she said. “It's stressful. But I trust God so, I mean, I'm not too worried about it. I know I am not going to be evicted because I trust God.”

Those who didn't know about the CDC moratorium include Charlene Wojtowicz, who thought she had avoided eviction from her two-bedroom house in Cleveland after a nonprofit paid three months of her back rent and her landlord withdrew his lawsuit. This week, the landlord demanded the 33-year-old mother of three pay the $455 she owes for November.

“I'm worried that me and my kids will be out on the street,” said Wojtowicz, who lost a new housekeeping job after getting COVID-19 this summer. “I'm a single mother with three children trying my hardest. It's not like I don’t want to pay this man.”

Eviction filings have begun creeping up in several states, with the Eviction Lab at Princeton finding cities in South Carolina, Ohio, Florida and Virginia saw big jumps during October. A factor, tenant advocates said, was the CDC's guidance related to the order last month that allows landlords to start eviction proceedings.

“It’s pretty alarming that lots of evictions are still, at least, being filed,” said Eric Dunn, director of litigation at the National Housing Law Project in Richmond, Virginia. The act of filing an eviction, he said, can prompt tenants to move out ahead of a hearing over fears that an eviction record would prevent them from renting another apartment.

“Because tenants often value their ability to obtain other rental housing over remaining in one specific property, the fact that such cases are being filed likely has a chilling effect on tenants who would otherwise assert the moratorium,” he said. “Tenants who receive eviction notices will move out to avoid the creation of an eviction record, rather than stay in their homes.”

The CDC last month also said landlords have the right to challenge the veracity of tenants' declarations that they qualify for the moratorium. A false claim could result in criminal charges for perjury, and lawyers for landlords have taken advantage of that language to challenge tenants in court.

To be eligible for protection, renters must earn $198,000 or less for couples filing jointly, or $99,000 for single filers; demonstrate that they’ve sought government help to pay the rent; declare that they can’t pay because of COVID-19 hardships; and affirm they are likely to become homeless if evicted.

“We now have to fight this battle every time we go into court, where it's not enough that the tenant provides the declaration,” said Hannah Adams, an attorney for Southeast Louisiana Legal Services. "Now they have to explain where every penny of their monthly check is going or even if they are getting a check. It creates a higher burden for tenants than was intended by the original order."

Also driving evictions is that the order only applies to nonpayment of rent.

As a result, landlords are increasingly trying to sidestep the order by evicting tenants for minor lease violations like excessive noise or trash, or they are simply not extending leases, tenant advocates said.

That is what is happening to Imus, according to Caitlin Cedfeldt, a staff attorney at Legal Aid of Nebraska. Even before a judge ruled Monday that she qualified for the federal moratorium, her landlord gave her a new notice to vacate, alleging criminal behavior at her residence.

“The landlord lost today, but I think they are going to keep coming after her with notices like these in an attempt to circumvent the federal order,” Cedfeldt said by email.

The other challenge is that any legal victory could be short-lived. The CDC order is set to expire Dec. 31, just when a spike in virus cases threatens to further undermine the economy. Many tenants owe months of back rent. The global investment bank and advisory firm Stout estimates that by January, renters will owe as much as $34 billion.

It is unclear if the moratorium will be extended as tenant advocates have demanded. In addition, a coronavirus relief package that could include tens of billions of dollars for rent and mortgage assistance appears to be going nowhere. State and local rental assistance programs provided some relief, but advocates say the funds fall far short of what is needed.

Advocates already are pressing President-elect Joe Biden to sign a broad, new national eviction moratorium on his first day in office. They want Biden to work with Congress in his first 100 days to pass a relief package that includes at least $100 billion in emergency assistance for renters and landlords and resources for the homeless.

“By the time President-elect Biden takes office on Jan. 20, we may be in the midst of a historic eviction crisis in our country if no action is taken between now and then,” said Diane Yentel, president of the National Low-Income Housing Coalition.