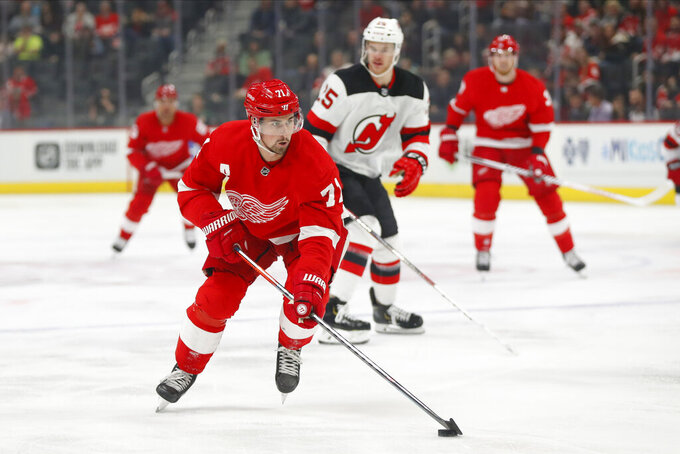 FILE - In this Feb. 25, 2020, file photo, Detroit Red Wings center Dylan Larkin (71) skates with the puck against the New Jersey Devils in the first period of an NHL hockey game in Detroit. The Red Wings are entering the fifth season of a rebuilding project and this still might not be the year that they break through and make the playoffs. (AP Photo/Paul Sancya, File)

The Detroit Red Wings have spent half a decade rebuilding.

And, this still might not be the year a once-proud franchise with 11 Stanley Cups breaks through and makes the playoffs.

Detroit had the NHL's worst record last season with 23 fewer points than any other team in a pandemic-altered season that mercifully lasted just 71 games.

When this shortened, 56-game season ends in May, the Red Wings will most likely extend their postseason drought to five years to match the longest since they were known as the Dead Wings from 1979-83.

Entering his second season as general manager with the franchise he led as a Hall of Fame center, Steve Yzerman is making no promises about progress.

“I can't really predict what we're going to be," Yzerman said. “I believe we'll be improved from last year. How much? I don't know."

The Red Wings have not played a game since March 10 because they didn't qualify for the 24-team playoff format last season.

They're trying to knock the rust off with exhibition games, including one on Tuesday at Little Caesars Arena.

“I was just saying to one of the guys, just to get out there, whether it’s a game or a scrimmage, just to get back in game shape and a game format it was fun,” winger Tyler Bertuzzi said.

Detroit is hoping that a trio of standouts turning into stars this season.

Center Dylan Larkin, who may be named captain, has three seasons left on his $30-plus million contract. The Red Wings signed winger Anthony Mantha to a $22.8 million, four-year deal, and Bertuzzi was awarded a $3.5 million, one-year contract in arbitration.

Each player has been good, but this team needs all of them to be better on a regular basis to have a shot to surpass low expectations.

“I want to be a great player in this league," Larkin said. “I want our team to be a great team that’s respected and is back in contention for the Stanley Cup every year."

Bobby Ryan is shooting to revive his career, taking advantage of a chance to play for a team in desperate need of help with a $1 million, one-year contract.

The 33-year-old winger was one of the NHL’s top scorers a decade ago, but his career was stunted in part by alcohol issues. He missed more than two months of last season after entering the NHL/NHLPA players assistance program in November of 2019.

Upon his return to practice in February, he shared his story in hopes of inspiring others facing similar challenges, and he later was named the Bill Masterton Trophy winner for perseverance, sportsmanship and dedication to hockey.

Yzerman turned over much of the roster, retooling with free agents up front, on the back end and in net. The additions include Ryan, center Vladislav Namestnikov, defensemen Troy Stecher and Jon Merrill along with goaltender Thomas Greiss.

“The players were very enthusiastic when we talked to them prior to signing with the team,” Yzerman said. “That was very encouraging. There will be renewed enthusiasm. A majority of our players are on short-term contracts. They have a lot to play for — a lot of personal motivation.”

The Red Wings placed forward Justin Abdelkader on unconditional waivers with three years left on his contract at a salary cap hit of $4.25 million and chose not to re-sign goaltender Jimmy Howard.

Detroit's first four games are at home, starting with a two-game visit from the Carolina Hurricanes on Jan. 14, to potentially help get off to a desperately needed strong start to begin the sprint of a season.