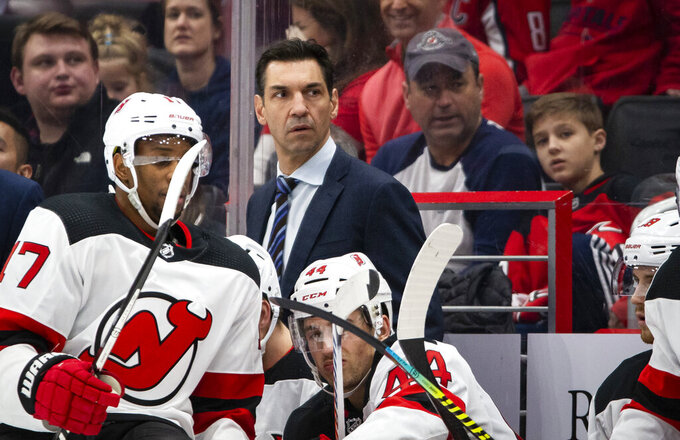 FILE - In this Jan. 16, 2020, file photo, New Jersey Devils interim coach Alain Nasreddine watches during the second period of the team's NHL hockey game against the Washington Capitals in Washington. Nasreddine is focusing on a having his team ready to play should the NHL resume games after a pause caused by coronavirus pandemic rather than whether he will have a job next year. (AP Photo/Al Drago, File)

New Jersey Devils interim coach Alain Nasreddine is focusing on a having his team ready to play should the NHL resume games after a pause caused by coronavirus pandemic rather than whether he will have a job next season.

The Devils have not commented on the report.

“To be honest, we’re still in the (20)19-20 season,” Nasreddine said. “As far as I know, I was the head coach on March 12th, you know, and I’m the head coach of the New Jersey Devils. Now, I’ve heard what’s going on with interviews and stuff like that. But to be honest, I’m just focused on this season.”

The 44-year-old Nasreddine has a 19-16-8 record since replacing John Hynes on Dec. 3. The Devils were 9-13-4 under Hynes and they have played much of the season with one of the NHL's youngest teams.

Nasreddine didn't expect to become a head coach this season and he admitted his anxiety increased when he was elevated to the top job. He said it's one thing to be an assistant coach for almost a decade and offer advice. Everything changes when you suddenly have to make the final decision and not every decision turns out right.

Nasreddine had taken pride in his work ethic and his preparedness.

“I really grew,” he said. “You know, I mean, three months felt like a year, but I felt like I got experience 10 years worth and I felt really comfortable in the end. You know, I feel like and I know it’s only a 40 or 50 games, but I feel like I’ve learned a lot. I’m ready.”

While the NHL has not announced plans, Nasreddine said he has heard the rumors if the league does resume play. It would be a 2-to-3 week training camp and the season might extend into June and July.

Whether that happens, we'll see.

Nasreddine said he talks with Fitzgerald a couple of times a week and has contact with his players. He talks to goaltender Cory Schneider and forward Kyle Palmieri more because they are the team's union player representatives.

“Right now, I consider if we come back, almost be another new year,” Nasreddine said. “We’re gonna have a training camp. We have time to make some adjustments. Well, there are a few tweaks, a few things we’re going to look at. And I think that will give us the perfect opportunity to work on them, whether it’s seven games, 13 teams, whatever that is. So we’re definitely going to look to to make some improvements.”

Nasreddine said he has not done player evaluations for the season, saying that's something that will happen once the season ends.

While he called the pandemic horrible, Nasreddine said the time off has given him more time with family than he has had in years. They eat together every day and he laughs about watching his children learn on-line.

“You know, I declare myself the school principal here at home,” he said. “Well, they didn’t like that too much. But we had a structure. We had a schedule in place. It’s been going real well with the school, with them. And then you have to know we’ll all get a little workout. Well, we’ll be active. So we have a routine that’s worked really well.”