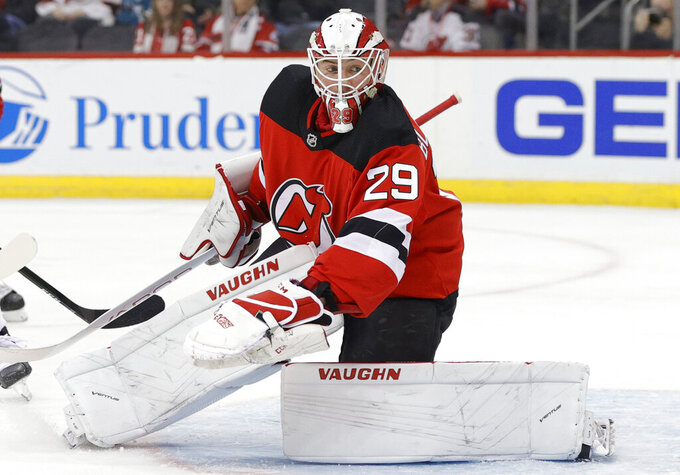 General manager Tom Fitzgerald announced the deal for the Devils' No. 1 goaltender on Wednesday.

"Mackenzie is going to be one of the key young, core pieces for this organization for a long time and we are excited and extremely happy to have him under contract,” Fitzgerald said. “He’s obviously shown that he can be a No. 1 goalie, and the sky’s the limit for him.”

“I’m excited. I’m really happy to be back,” Blackwood said from his hotel room in New Jersey. “You know, this is awesome. I’m really excited for the year coming up and, you know, to get back with the team and see all the faces and all the new ones that I haven’t met yet.”

The NHL will have a 56-game season in 2021. The first game will be played on Jan. 13 and the regular season is scheduled to run through May 8.

Blackwood posted a 22-14-8 record with a 2.77 goals-against average and three shutouts last season, which was paused because of the COVID-19 pandemic and later restarted by going straight into the playoffs with 24 teams. He had a .915 save percentage.

Because the Devils missed the playoffs, they will be allowed to start training camp on Dec. 31. Playoff teams begin on Jan. 3.

Blackwood, who started working out in Toronto in November, said that once the NHL schedule was outlined, contract talks progressed quickly.

This might be a different season for Blackwood. He got most of the playing time last season with Cory Schneider, now with the Islanders, struggling as his backup.

New Jersey signed veteran goaltender Corey Crawford in the offseason. The 35-year-old gives the Devils a proven goalie who twice helped the Chicago Blackhawks win the Stanley Cup (2013 and ’15).

“My approach is kind of the same whether I play with Cory or the other Corey or anybody,” Blackwood said. “It doesn’t matter. It’s more about, you know, making sure that I’m on top of my game and always learning and growing. So it’s nice to have good people around you and good teammates like that. But I think, you know, my approach doesn’t change.”