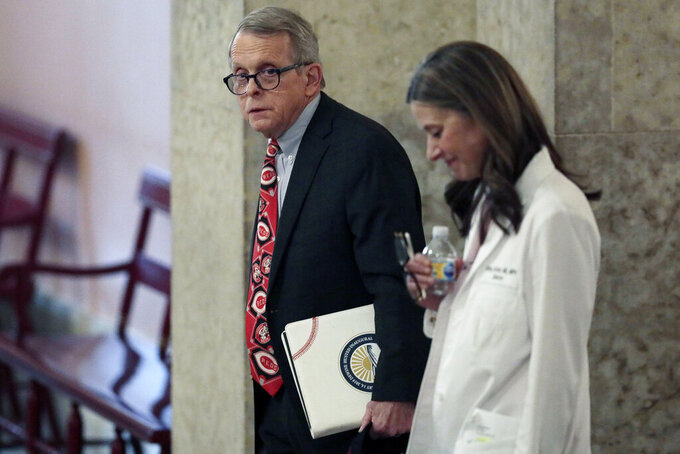 FILE - In this March 26, 2020, file photo Ohio Gov. Mike DeWine, left, and Dr. Amy Acton, director of the Ohio Department of Health, leave the State Room before their daily update on the states response to the ongoing COVID-19 pandemic at the Ohio Statehouse in Columbus, Ohio. DeWine is ready to mark one year of fighting the coronavirus pandemic. It was 12 months ago Wednesday, March 3, 2021, that he laid down strict attendance limits on the annual Arnold Sports Festival in Columbus, which brings thousands of people to the capital city. (Joshua A. Bickel/The Columbus Dispatch via AP, File)

COLUMBUS, Ohio (AP) — At the beginning of 2020, Ohio Gov. Mike DeWine was working on plans to battle algae blooms in Lake Erie, crack down on distracted driving, and figure out a way to save an Ohio minor league baseball team.

The largely popular first-term Republican governor accepted an invitation to give the commencement address at Miami University in May. The 2022 election was a long way off, but some Democrats were already exploring challenges to DeWine.

Then came the first week of March, and with it a decision by DeWine that set the stage for a year of politics that today seems like something viewed from the other side of Alice in Wonderland's looking glass.

On March 3, without a single reported COVID-19 case in the state, DeWine laid down strict attendance limits on the annual Arnold Sports Festival in Columbus, a supersized gathering founded three decades ago by Arnold Schwarzenegger that typically brings 20,000 athletes from 80 countries to compete in events including professional bodybuilding and a strongman competition. Annual economic impact on the city: more than $50 million.

“That was really, at least for me, the beginning of the pandemic,” DeWine said earlier this week, adding: “It’s hard to believe that it’s been an entire year.”

Nine days later, with the virus spreading rapidly elsewhere but with just five confirmed virus cases in Ohio, DeWine ordered schools closed for three weeks, becoming the first governor nationally to make such a move. The closing of gyms and theaters followed shortly, and then statewide stay-at-home orders.

What came next was a year of surprising political turmoil for a career politician who many initially believed had met his moment. DeWine, who's held multiple state and federal offices, now faces reelection in 2022 amid fierce criticism from the very Republicans whose party he spent decades helping to build.

DeWine's actions against the virus won him early praise, not just from public health professionals but also from business groups and even restaurant owners hammered by the shutdown who acknowledged his actions could save lives.

Soon DeWine, Health Director Dr. Amy Acton and GOP Lt. Gov. Jon Husted were a daily fixture for many Ohioans, the 2 p.m. routine dubbed “Wine with DeWine” by cooped up Ohioans teasingly prone to day-drinking by the pandemic. Acton became a folk hero in her own right, inspiring young girls to dress up like doctors and to conduct their own living room briefings.

In April, DeWine walked back a statewide mask mandate after a single day following intense opposition from Republican constituencies, including many businesses. While keeping masks mandatory for business employees, he finally issued a statewide mandate in July that remains in effect. A DeWine spokesperson said Wednesday there are no immediate plans to lift it despite the decision by Texas and other states to end their mask mandates.

On April 13, dozens of lockdown protesters shouted outside the Statehouse Atrium and briefly pounded on its windows as reporters covered the governor’s daily briefing, which had been moved to increasingly larger spaces to accommodate social distancing rules.

As virus deaths rose and national divisions grew, Republican lawmakers pushed back with multiple bills against the GOP governor's public health orders, leaving Democratic legislators to defend Acton and DeWine. One legislator started a movement to have DeWine impeached.

The bespectacled, graying 74-year-old persisted, concentrating during his briefings on conveying the status of the pandemic and buoying the state's spirits. He praised ball teams, music groups and schoolchildren, celebrated frontline workers and small business owners and brought on First Lady Fran DeWine to share recipes, activities for parents to do with their stir-crazy children and tips for making a festive mask. He and the first lady also livestreamed themselves receiving the first shot of the COVID-19 vaccine.

In June, it appeared his strategy was working. DeWine's approval rating spiked 31 percentage points from the previous year, to 75%, in a Quinnipiac University poll released that month. Approval for his coronavirus response was even higher, at 77%. What's more, the numbers carried across party lines and marked an all-time high for any Ohio governor in all the school's polls of registered voters going back to 2007.

Around that same time, though, Acton had had enough, quitting abruptly amid a torrent of conservative criticism of her that included armed protesters outside her suburban Columbus house. The 55-year-old is now exploring running as a Democrat next year for an open U.S. Senate seat.

With his amiable virus expert gone and criticism growing, DeWine augmented his bi-weekly briefings with two primetime speeches to Ohioans, on July 15 and Nov. 10, pleading for people to wear masks and socially distance themselves to slow the spread of the virus.

Meanwhile, a faction of far-right conservatives grew angrier and louder as the months passed. They refused to wear masks as DeWine and the Centers for Disease Control and Prevention advised. They rebelled against stay-at-home orders, business closures, curfews and other safety measures. Some GOP governors were opening their states in response, leaving DeWine in an increasingly shrinking club of Republicans willing to embrace some continued restrictions.

Less than a week after his November speech, DeWine found himself in the upside down political position of being praised by Democratic President-elect Joe Biden on the same day he was trolled on Twitter by former GOP President Donald Trump, who suggested that DeWine needed a primary challenger.

DeWine plans to seek reelection next year. Some critics of the governor’s response within the party want the road kept open for him to face a GOP primary challenge; early potential candidates include central Ohio farmer Joe Blystone. In the meantime, that minor league baseball team survived for now and DeWine continues to push clean water issues and a crackdown on distracted driving.

DeWine vetoed a legislative clampdown on his public health orders in early January, but today faces a similar bill headed for his desk.

As he has throughout the past 12 months, DeWine said last month that lawmakers must focus on the bigger picture.

This story has been corrected to show that a central Ohio farmer has filed to challenge Ohio Gov. Mike DeWine in next year's GOP primary.