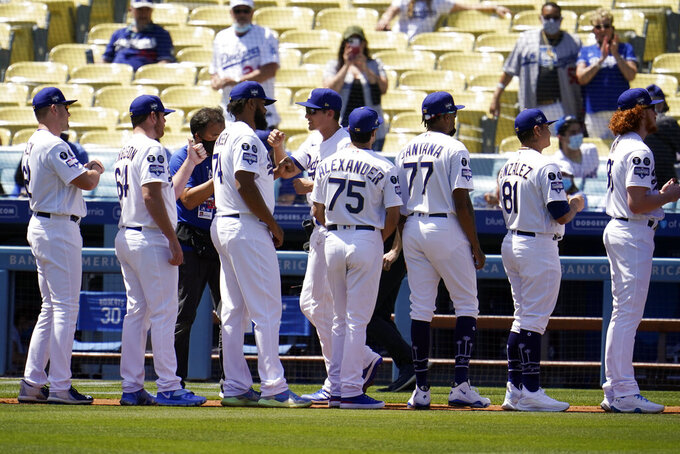 Members of the Los Angeles Dodgers greet each other during player introductions before a baseball game against the Washington Nationals, Friday, April 9, 2021, in Los Angeles. (AP Photo/Marcio Jose Sanchez)

LOS ANGELES (AP) — The Los Angeles Dodgers received their World Series rings Friday in front of the loyal hometown fans who didn't get to witness their 2020 championship run in person.

Clayton Kershaw, Mookie Betts and the Dodgers collected their jewelry before Los Angeles' home opener. The team also raised a championship banner behind center field to the roars of a Chavez Ravine crowd that made up for its pandemic-limited numbers with joyous noise.

Those fans never got into Dodger Stadium to witness their team's run to its first championship in 32 years. The Dodgers were well aware their ring ceremony was a cathartic moment for both the players and their millions of fans who were forced to enjoy a title run from afar.

“We’ve had a year that we could have never imagined,” said Dodgers owner Mark Walter, who hoped the championship season could “serve as an inspiration to finish this fight against the terrible pandemic, and to continue the fight for justice and equality for everyone.”

The Dodgers introduced each player with a congratulatory video from one of his baseball heroes. Will Clark congratulated Kershaw, who idolized the Rangers first baseman growing up in the Dallas area, while Betts — who only joined the Dodgers last year — got congratulations from Jimmy Rollins before receiving his first-ever ovation from Los Angeles' fans.

Left-hander David Price got a World Series ring despite opting out of his first season with Los Angeles due to the pandemic, but the veteran announced he is auctioning the ring to benefit The Players Alliance and its social justice causes.

The Dodgers also took a moment to honor Tommy Lasorda, the beloved former manager who died in January, just over two months after he witnessed Los Angeles' championship-clinching victory in Texas.

“Rest assured he’s smiling today and his spirit is with each and every one of us,” she said.

She introduced Dodgers manager Dave Roberts, who pointed skyward on his way to receive his ring.

Dodgers owner Magic Johnson and Los Angeles Mayor Eric Garcetti — who was booed — raised the 2020 championship banner on a flagpole beyond center field.

Kershaw and several teammates put on their rings immediately after receiving the box, triumphantly flashing them for the cameras. The rings are stacked with hundreds of diamonds and sapphires totaling 11 karats.

Enrique Hernández and Joc Pederson missed the ceremony after leaving the Dodgers during the offseason.