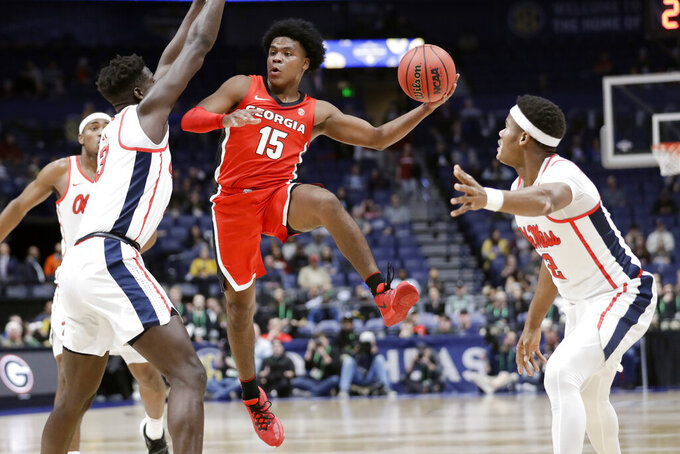 File-This March 11, 2020, file photo shows Georgia guard Sahvir Wheeler (15) driving between Mississippi defenders Khadim Sy (3) and Devontae Shuler (2) in the first half of an NCAA college basketball game in the Southeastern Conference Tournament in Nashville, Tenn. Wheeler, who led Georgia in scoring as a sophomore, says he is entering his name in the NCAA's transfer portal while also exploring his NBA options. (AP Photo/Mark Humphrey, File)

Point guard Sahvir Wheeler, who led Georgia in scoring as a sophomore, said Tuesday he is entering his name in the NCAA's transfer portal while also exploring his NBA options.

Wheeler averaged 14.0 points to lead Georgia while also leading the Southeastern Conference with 7.3 assists per game.

Wheeler, from Houston, announced on his Twitter feed he is protecting his eligibility while declaring for the NBA draft. He said he is seeking feedback from the NBA about his draft outlook. He left open the possibility he could return to Georgia.

“This is an opportunity for me to gather valuable feedback from NBA teams,” Wheeler said. “I am also entering my name into the transfer portal to evaluate all opportunities including my current one at UGA. It has always been my dream to win at the highest level and play in the NBA.”

Wheeler started every game as Georgia finished 14-12 overall and 7-11 in the SEC under coach Tom Crean.

Crean said in a statement released on Tuesday the travel restrictions due to the coronavirus pandemic made it more difficult for Wheeler to be away from his family in Texas.

“After talking with Sahvir and his family and realizing that he and his family have only seen each other a couple of times in the last ninth months along with the strain of isolation it took to play this year and the desire to chase his dream of the NBA, the Wheeler family has informed me Sahvir’s intent to transfer and be closer to home,” Crean said.

"We appreciate Sahvir’s contribution to our program and wish him the best moving forward.”

Crean, the former Indiana and Marquette coach, is 41-49 overall and 14-40 in SEC games in three seasons at Georgia.