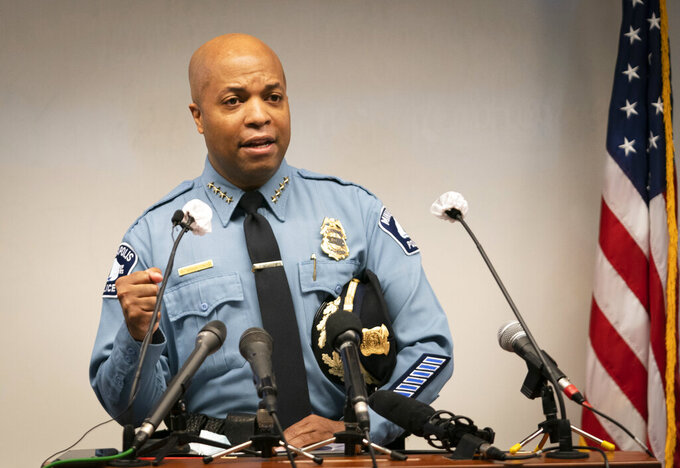 Police Chief Medaria Arradondo speaks during a press conference to announce the Justice Department has put $3 million toward the creation of a national center to help law enforcement agencies prevent the use of excessive force at the Federal Courthouse, Tuesday, Oct. 20, 2020, in Minneapolis. Chief Arradondo says he's grateful for the offer and hopes city leaders will take advantage of it. (Renee Jones Schneider/Star Tribune via AP)

MINNEAPOLIS (AP) — The U.S. Department of Justice announced Tuesday that it has put $3 million toward the creation of a national center that will provide training and assistance to help law enforcement agencies prevent the use of excessive force, and officials expressed hope that Minneapolis would be the first city to take advantage of the resource.

The announcement was made in Minneapolis, where the police department has been under pressure to reform since the May 25 death of George Floyd, which touched off mass demonstrations against police brutality around the nation.

Police Chief Medaria Arradondo said Tuesday that he is grateful for the offer and hopes city leaders will take advantage of it. He said the center would provide more resources and training, including mental health resources for officers, at a time when he trying to make changes at the department while facing diminished staff.

“In creating a new MPD, I want to utilize all available tools and resources to support the hardworking and professional men and women of the MPD," Arradondo said. “We have an obligation and duty to be guardians of our communities and enhance our level of service and this program seeks to do just that.”

The program’s announcement two weeks before the election carried echoes of the law and order theme President Donald Trump has hammered at since unrest broke out in several cities around the country after Floyd’s death.

The national response center will be run by the International Association of Chiefs of Police and will be a resource for all state, local and tribal law enforcement agencies, said Katharine Sullivan, principal deputy assistant attorney general for the Office of Justice Programs.

She said justice officials envision the center would have a coordinator, who is an expert in policing, who will help agencies with training, issues of officer safety, officer recruitment or retention, and other issues.

“The idea is that we are here to meet your needs. Not to descend,” Sullivan said.

Tuesday's announcement was not the result of a larger-scale investigation and consent decree that would bind the Minneapolis Police Department and force major changes within its ranks. Previous consent decrees mandated reforms in Ferguson, Missouri, after the killing of Michael Brown, and in Baltimore after the police custody death of Freddie Gray.

While the Justice Department could still initiate a “pattern and practice” investigation as part of a civil rights probe, Attorney General William Barr has suggested such investigations may have been previously overused. A federal criminal investigation into whether the four officers violated Floyd's civil rights is still ongoing.

Floyd, a Black man who was handcuffed, died after f ormer officer Derek Chauvin, who is white, pressed his knee against Floyd’s neck for several minutes while Floyd said he couldn’t breathe. His death sparked a renewed sense of outrage over the deaths of Black people at the hands of police, and sparked mass demonstrations that have defined the last six months of American life. Chauvin and three others were charged in Floyd's death and are expected to stand trial in state court in March.

Floyd's death prompted calls for overhauling or defunding police departments nationwide. In Minneapolis, a majority of City Council members pledged to dismantle the department, though a city commission ultimately blocked the council’s effort to put the issue before voters this November. Arradondo and Mayor Jacob Frey, a Democrat who opposed abolishing the department, have continued to make incremental changes to change the agency’s culture, including banning chokeholds and changing the department’s use of force policy.

All of this came as the city saw rising violence this summer, budget cuts due to a loss of revenue as a result of the COVID-19 pandemic, and the departures of dozens of officers. Arradondo said Tuesday that he's down an estimated 130 officers compared with this time last year, and he expects more departures by year's end. A lawyer helping officers file for disability leave has said he's helped process about 175 claims since Floyd's death.

The police department is also being investigated by the state Department of Human Rights, which is looking into the department’s policies and practices over the last decade to see if it engaged in systemic discriminatory practices.

Barr has said he recognizes there is racism in the U.S., and that there’s reason for some communities to be more suspicious of law enforcement than others, but he doesn’t think there is systemic racism.

Instead, he believes it's incumbent upon the government to ensure there are adequate policies to protect against abuse and that officers have proper training. He has said that going too far and pushing to defund or disband police departments, or moving quickly to bring criminal charges against police officers without robust investigations, is likely to lead to a mass exodus of officers.