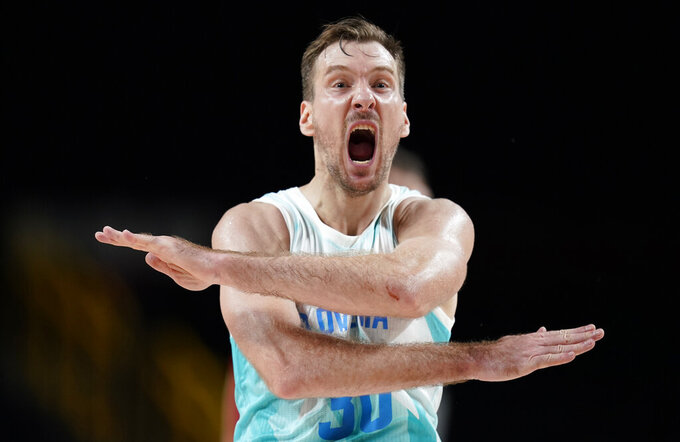 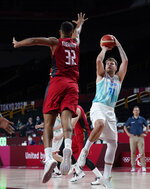 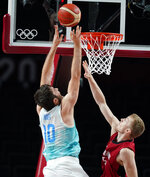 SAITAMA, Japan (AP) — Luka Doncic and Slovenia need one win for a medal in their Olympic basketball debut.

Wins are all Doncic ever gets when he wears his country's uniform.

Doncic had 20 points, 11 assists and eight rebounds, and Slovenia beat Germany 94-70 on Tuesday in the opening game of the men's quarterfinals.

Zoran Dragic got Slovenia off to a fast start by making his first six shots and finished 11 for 13 en route to his 27 points.

Doncic is the unquestioned star of the Slovenians — maybe of the entire basketball tournament. But all the attention he draws means opposing defenses have to leave other players open and Doncic is happy to give them the ball.

“He’s the team leader,” Dragic said. “We know that and we accept that, but we have so much weapons on our team and it’s easy to play with him because when he plays, like three guys have to guard him.”

Doncic wasn't sharp early in the 10 a.m. local start but picked it up in the second half with his scoring and playmaking to keep Germany from making any serious dent in Slovenia's lead.

The Slovenians will face unbeaten France on Thursday in the semifinals.

They are 17-0 in competition with Doncic, now looking to add Olympic gold to the European championship they won in 2017.

“Great bunch of guys playing together. Great chemistry. There is no ego on the team,” Slovenia coach Aleksander Sekulic said. “There is no selfishness and they really play their hearts out every game.”

Slovenia won its group by outlasting world champion Spain 95-87 on Sunday to earn one of the top seeds, avoiding having to play the U.S., France or Australia until the semis.

But Germany was tough enough for a while, climbing back into it after Slovenia's fast start, before Doncic and his teammates pulled away for good early in the second half.

“Obviously they have one of the best players in the world but he’s not alone,” Germany coach Henrik Roedl

“When everyone else hits, it’s very difficult to play this team.”

Maodo Lo scored 11 points as Germany wrapped up its first Olympic appearance since 2008, when it was led by Dirk Nowitzki, Doncic's teammate his rookie season in Dallas.

Doncic was the leading scorer in the tournament with 28.3 points per game through the group stage. For the second straight game, he finished just shy of the first triple-double in the Olympics since LeBron James for the U.S. in 2012.

Both teams capitalized on last chances to qualify for the Olympics by winning two of the four qualifying tournaments that were held last month.

Slovenia has much bigger goals than just getting here.

Slovenia shot out to a 23-12 lead by making nine of its first 12 shots, with Dragic going 4 for 4. It was 25-14 after one, but Lo made three 3-pointers in a little over a minute midway through the second as Germany rallied to take a 32-31 edge.

Slovenia quickly regained the lead and took a 44-37 lead to the locker room when Dragic made a 3-pointer for the final basket of the half.

Dragic made another 3 to open the second half and pushed the lead back into double digits and it wasn't close again.