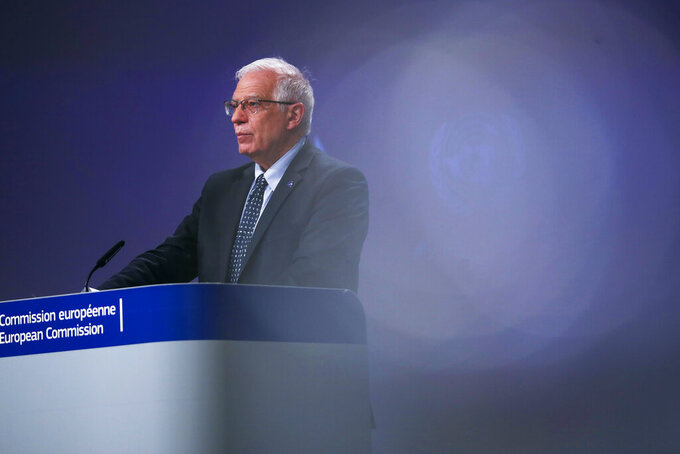 BRUSSELS (AP) — The European Union, the U.S. and dozens of other nations pledged $6.4 billion in aid Tuesday to help tackle war-ravaged Syria's deepening humanitarian and economic crises and assist neighboring countries hosting refugees, coming up short of the $10 billion the U.N. had hoped for.

The promise of aid came on the final day of an annual conference co-hosted by the United Nations and the EU amid a worsening coronavirus pandemic. The conflict in Syria has entered its 11th year with no political solution in sight.

“A decade after Syrians peacefully took to the streets asking for freedom, justice and economic perspectives, those demands are still unmet and the country is in chaos," said Josep Borrell, the EU's top diplomat.

The global pledges were lower than last year’s total of $7.7 billion. Before the conference, the U.N. and other aid groups had said they were seeking more than $4 billion for aid to Syria, their biggest appeal yet. Another $5.8 billion was requested for nearly 6 million Syrian refugees who fled their homeland.

A group of 37 aid agencies said they were disappointed.

“While we welcome countries’ pledges that have kept their funding at similar levels to last year’s or increased it, as did Germany, it is extremely disappointing to see two major donors, the UK and the US, turn their back on the plight of Syrians," they said. “This will have a devastating impact on their lives."

U.S. Ambassador to the United Nations Linda Thomas-Greenfield announced more than $596 million in U.S. humanitarian assistance for 2021. The State Department said the aid will benefit people in Syria and refugees in neighboring Turkey, Lebanon, Jordan, Iraq and Egypt.

The decade of bloodshed in Syria has killed more than a half million people and sparked an exodus of refugees that has destabilized neighboring countries and impacted Europe. According to the U.N., 13.4 million people in Syria — more than half the country’s pre-war population — need assistance. That’s a 20% increase from last year.

Amid the coronavirus pandemic, Syria's humanitarian situation has worsened. The local currency has crashed and food prices have soared — increasing by 222% from last year. Nine out of 10 people live below the poverty line and in northwestern Syria, an area that is held by the rebels, close to three-quarters of the 4.3 million residents are food insecure.

“The situation for Syrians in their own country and neighboring countries is worse than it has been at any time really over the previous nine years" U.N. humanitarian chief Mark Lowcock said. “There is less violence, but there is more suffering."

“The Syrian tragedy must not last another ten years," he said. “Ending it begins by restoring hope."

“Coming just weeks after the 10-year anniversary of the conflict, this decision is deeply concerning, especially given the high impact that British aid has had over the last ten years," said David Miliband, president of the International Rescue Committee aid group.

Calling for a political resolution of the conflict, Borrell said the future of Syria “belongs to none of the factions and to none of the outside powers. It’s for Syrians to shape, in Syrian-owned and Syrian-led negotiations under the auspices of the United Nations."

The Syrian government has taken back control of the country's biggest cities, but large swaths of Syria are still held by rebels. President Bashar Assad’s supporters include Russia and Iran, while Turkey and Western powers have backed the opposition.

Geir Pedersen, the U.N. special envoy for Syria, said a cease-fire remains “more urgent than ever" and expressed worries about the threat posed by extremist groups.

“The resurgence of these groups and the territorial hold of some of them cannot leave the international community indifferent," he said. “At the same time, it is clear that this challenge can only be addressed in manners that uphold international law and the principles of the protection of civilians."

Lowcock insisted on the crucial importance of providing support for Syrian children, not only on humanitarian grounds, but also for strategic reasons.

“What do we think those children will be like as adults, if they never go to school, if all they have known is a world of war, if all they see is suffering?" he said.

According to the U.N. children’s agency, the civil war has killed or wounded almost 12,000 children and left millions out of school.