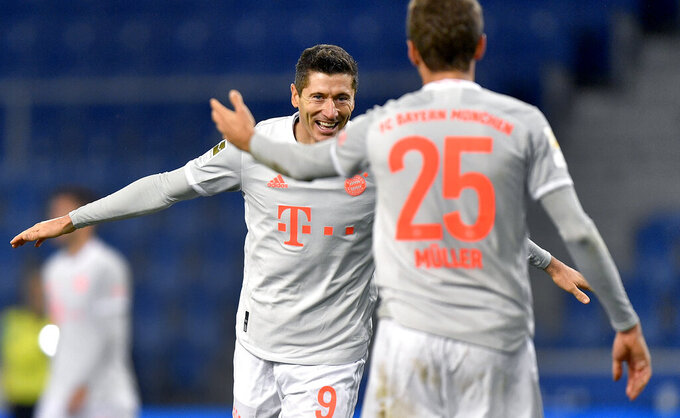 BERLIN (AP) — Borussia Dortmund needed substitutes to dig it out of a hole for a 1-0 win against Hoffenheim, while Bayern Munich had no such difficulties as it romped to another Bundesliga rout on Saturday.

Bayern beat Arminia Bielefeld 4-1 in what seemed at times like a training match, ensuring its record of not losing to a promoted side since 2010 continues at least until Nov. 28, when Stuttgart is next to challenge.

Both Thomas Müller and Robert Lewandowski scored twice for Bayern, the latter completing his feat of scoring against each of the division’s 18 teams. The Poland star’s goals against Bayern for previous club Dortmund helped convince the Bavarian powerhouse to sign him in 2014.

Japanese forward Ritsu Doan pulled one back for Arminia as Bayern relaxed with half an hour to play.

The home side was given further encouragement in the 76th when Corentin Tolisso was sent off for bringing down Fabian Klos as the last defender. The French midfielder was put in a thankless position after a botched back pass from Javi Martínez.

But Bayern’s superiority was never in doubt and Hansi Flick’s team saw out its third win from four league games.

Dortmund hadn’t won any of its last five meetings with Hoffenheim, but Erling Haaland ran on to a ball headed from midfield and kept his cool in front of Hoffenheim’s goalkeeper before unselfishly crossing to give Marco Reus a tap-in in the 76th.

It had been an uninspiring game from the visitors, the first of seven matches in 21 days, including Tuesday’s Champions League opener at Lazio and next week’s Ruhr derby against Schalke.

Coach Lucien Favre opted to keep Haaland, Reus, Jude Bellingham and Raphaël Guerreiro on the bench at the start, and it was the home side that had the best early chance through Mijat Gacinovic.

Gio Reyna and Thomas Meunier went closest for Dortmund in the first half, the latter hitting the crossbar in the 37th, before Sebastian Rudy wasted a good chance for Hoffenheim.

Favre brought Reus and Haaland on for the ineffective Jadon Sancho and Julian Brandt in the 64th, then Bellingham and Guerreiro in the 75th. Haaland set up Reus for the winner a minute later. Five substitutes are still allowed in the Bundesliga.

Hoffenheim played without Andrej Kramaric and Kasim Adams after they tested positive for the coronavirus after returning from international duty, while Pavel Kaderabek was in quarantine due to a family member’s result.

Dortmund defender Manuel Akanji is in quarantine after testing positive.

“I think we have to be very careful. It’s dangerous. There will be more cases,” Favre said after the game. “We have to keep trying to play as long as we can.”

Yussuf Poulsen scored a contender for goal of the season to help Leipzig end Augsburg’s perfect start with a 2-0 win. Dani Olmo sent the ball on and Poulsen connected with a volley to curl the ball over the goalkeeper and inside the far post.